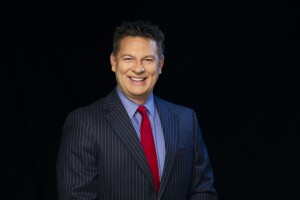 Roland Beres is thrilled to be back in Boise after a 10 year diversion in Madison, Wisconsin. He spent six years in Boise anchoring a morning show in the late 90s. When the opportunity came up to anchor Fox 9 News at Nine, he jumped at the chance to return to the Treasure Valley.

"I was always comparing Madison to Boise, and it just never measured up," he says, "I love the active lifestyle and how involved the people are in Idaho. I love the weather, the Broncos (the Oklahoma game is the greatest in history) and, of course, the chance to float the Boise River."

Roland is a product of the University of Oregon School of Journalism. His first TV job out of school taught him to be a jack of all trades. He shot video, reported, produced, and even anchored at a tiny bureau in Roseburg, Oregon. "I was too young to anchor anywhere else. I looked like I was 15 years old." That was 1990.

21 years later, he's still shooting, anchoring and reporting. "I want to be out in the community asking the tough questions and holding those in power accountable. That's why I got into journalism in the first place."

Roland and his wife Carol have two kids. Both of them can't wait to click on the skis and head up to Bogus. Their pug, Murphy, is perfectly happy staying warm and cozy on Roland's pillow at home in Meridian.