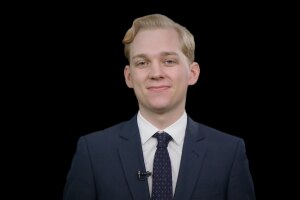 Alex Grant is joining 6 On Your Side all the way from a small town in Northern New Jersey, just outside New York City. He earned his degree in Media Studies and Production from Temple University in Philadelphia. While he originally wanted to act, once he visited ABC 7 in Manhattan and MY9 News in New Jersey he was inspired to become a television journalist.

As a student at Temple he made sure to take as many opportunities as possible to get the experience he needed. He joined the school's news program, Temple Update where he managed to do field reporting, sports reporting and anchoring as well as some behind the scenes work. In his last semester he obtained a News Production internship at Philadelphia's FOX affiliate, FOX 29 where he also assisted with the local game show, The ClassH-room.

During Alex's free time he very much enjoys listening to music, watching soccer and hanging out with his friends and coworkers. Since he is very much a city kid, he loves to explore Downtown Boise and see what cool restaurants, bars and music venues the city has to offer. However, Alex is still very excited to see what sort of out door recreational activities Idaho will provide.