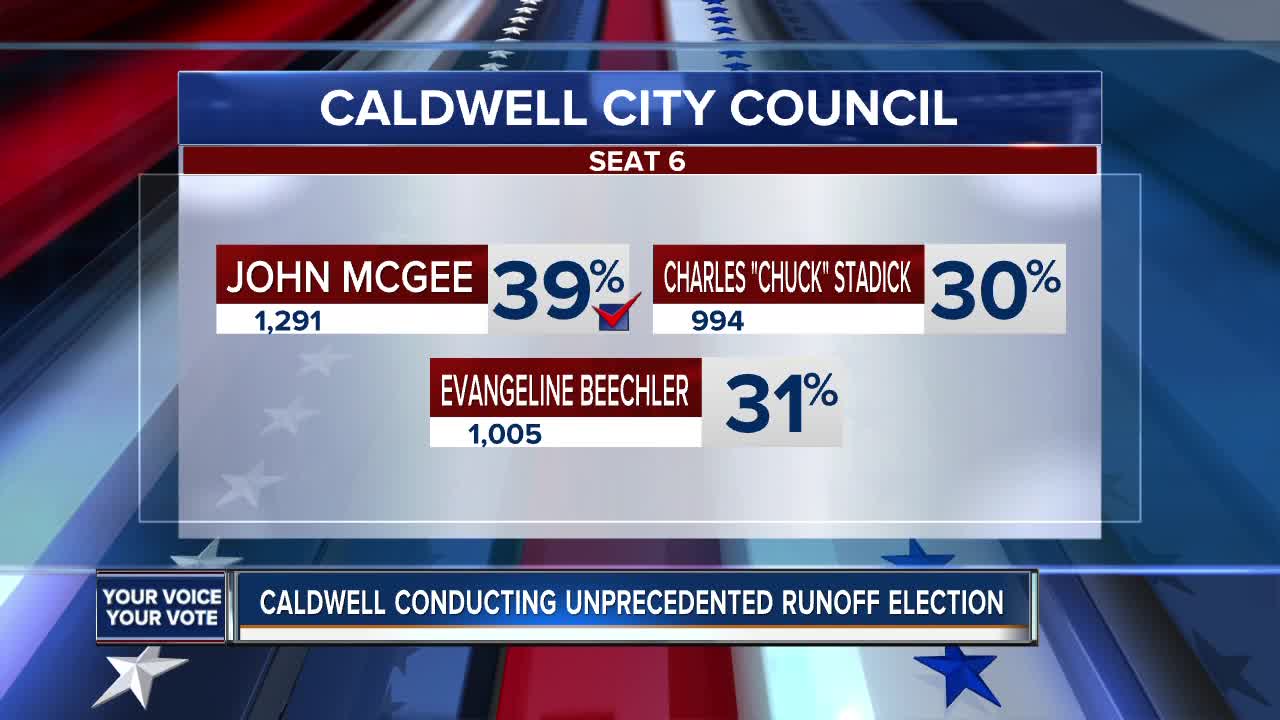 BOISE, Idaho — The City of Caldwell will now be conducting a runoff election for Caldwell City Council, Seat 6.

6 On Your Side originally reported that John McGee had won the seat with 39.24% of the vote, but he will now be facing Evangeline Beechler for a runoff election.

The issue is the code doesn't define what a majority is.

“At 12:35 p.m. today, we received a request from the City of Caldwell to hold a run-off election for Caldwell City Council Seat 6. At this time, we are ascertaining the availability of the polling locations used on November 5, along with the availability of the poll workers used during the election. It appears unlikely that we will be able to use the same polling place locations for the run-off election, so we are currently working on an alternative plan that will be released when finalized. The tentative date for the run-off election is Tuesday, December 3, 2019, but it still needs to be confirmed. All costs associated with the run-off election will be paid by the City of Caldwell. There are too many unknowns at this time to provide an actual cost, but it is estimated to cost approximately $30,000.”

Beechler released a statement in response to the runoff as well. It reads as follows:

“I am very pleased and encouraged that Mayor Garret Nancolas has decided to put the citizens of Caldwell first and move forward with a runoff election for seat 6 on the city council. This is about ensuring the next city councilperson has the confidence, comfort and trust of all Caldwell voters, and I’m more confident than ever now that we can win this race.”

"As requested, I have reviewed the applicable election law and advise you that the City of Caldwell has improperly and illegally requested the County Clerk to conduct a runoff election for city council seat 6. The thirty year old city code provision at issue requires that all council members be elected "by a majority of qualified electors." The term qualified electors under Idaho law means registered voters.

By that standard, correctly interpreted, no person has been lawfully elected to the Caldwell City Council since that law was put on the books in 1989. Per the text of the law, a successful candidate would have to win 50% plus one vote in a 100% registered voter turnout election or 100% of the vote plus one vote in a 50% turnout to win a council seat. As elections now are conducted with turnout figures at a level of twenty or thirty percent of registered voters, the language of the Caldwell ordinance effectively precludes anyone's election.

The legally correct response in such a situation, as to the election just conducted, is to either continue to ignore the language and declare all three winning candidates elected or to hold runoffs for all three seats under the ordinance language as written. Meanwhile, the Caldwell City Council should convene an emergency meeting to amend the ordinance to provide that council members shall be elected by a majority or plurality "of the votes cast" in such an election by "qualified voters."

I believe, if you protest the call for a runoff election solely on seat 6 to the canyon county prosecutor's office or file litigation to raise the issue, that you will receive rulings consistent with the above legal opinion."

In past races for Caldwell City Council, candidates have taken office after receiving less than 50% of the vote.