"My name is Brent Coles and I’m running for the office of mayor." 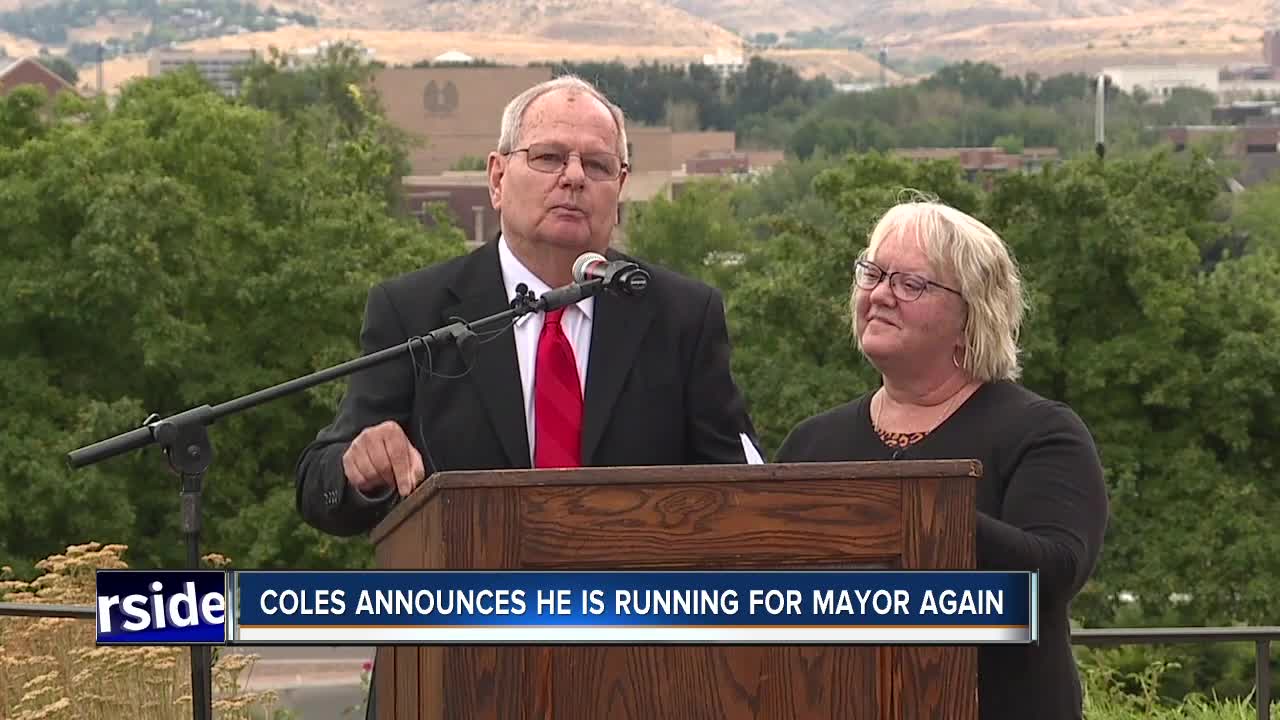 BOISE, Idaho — In a surprising announcement, former Boise Mayor Brent Coles has made it official; he’s running for mayor.

Coles made the announcement Friday morning during a press conference at the Boise Depot. He joins six other candidates fighting for the position.

With his wife at his side, Coles said he wants to cut taxes and wants to see the city stop tearing down and moving buildings.
He said he also wants to “freeze the (city) budget where it is.”

“The current administration it doesn’t seem that they can see that their tax and spend policies are increasing the taxes that people are paying within our city and that causes homelessness," Coles said. “Instead of $11 Million on an architect taxes paid by the people of this good city, lets take that money and lets use it for a bus system that the people in Boise ride for free.”

A look back on Coles' time as mayor

Coles resigned as mayor of Boise in February 2003, after the Idaho Attorney General filed two corruption charges against him in a scandal that rocked City Hall.

“In 2003 I resigned the office of mayor of the City of Boise." Coles told 6 On Your Side. "At the time, I had been charged with two felonies and one count of fraud. These were serious charges and I took full responsibility my resignations from the office I had held for 10 years was absolutely devastating to myself my family and our community.”

Related: The scandal that rocked City Hall: A timeline of Brent Coles' time in office

Coles says he's apologetic, and promises never to put his family, or the City of Boise, through that "devastation" again.

“The devastation that I went through I would never want to go through again I wouldn’t ever take the city through that devastation again, or my family. It was a hard lesson, but it’s a lesson that was ingrained on my soul," Coles said. "I want to apologize to my family, to my wife, for putting them through some really tough times over the last 16 years. I also apologize to the people of Boise for putting them through the turmoil that ensued.”

“Voters are going to be skeptical, they’re going to want to see what I’m saying and an important part of it is do they believe in the policy, do they want a change in policy, and will they look beyond what I did when I left office and look at the 20 years of service prior to that time," Coles said.

#BREAKING: Former Boise mayor, Brent Coles, has announced he will run for mayor.

The scandal also led to the resignation of Boise Police Chief Don Pierce, who was caught on a city hall security video assisting Coles in returning items owned by the city that had been taken to Lyman’s Boise home.

In addressing reporters, Coles also said he would like to see the city build more fire stations and hire additional police officers.

Coles is considered a Republican, although the office of the mayor is officially nonpartisan.

Mayor Bieter's campaign issued a statement after the announcement, leading with:

"Not many people remember where Boise was before Mayor Bieter took office. City Hall was in ruins. A disgraced mayor left as a criminal and Boiseans had little trust in their government. Under Mayor Bieter's leadership, we've moved past those times and made amazing progress as a city. By every measure, we are safer, cleaner, more prosperous, and more caring than we have ever been."

Mayoral candidate, Lauren McClean has released a statement in response:

"In light of today's news I want to be clear: my mission remains unchanged. I'm working to earn a majority of Boiseans' votes, whether that be in November or in a December run-off.
I've spent my whole career helping people engage with their elected leaders and I treasure our democratic process, full stop. My focus is moving beyond the same old tired grudges and politics of the past, listening to what people need NOW, and working on a bold new Boise future that includes everyone."

So how does population growth factor in?

Since Coles resigned 16 years ago, many people have moved to Boise who know very little, if anything about the scandal. 6 On Your Side's political consultant, College of Idaho Political Science Professor, Jasper Licalzi, says this may be significant.

Licalzi says he expects there to be a traditionally low turnout for the November 5th election, but this could be an election of changes. If competition heats up, more people may head to the polls. Licalzi believes Coles' chances are "very slim" but even that could change.

"The only chance Brent Coles can have is that there's not one dominant candidate out there," Licalzi said. "We have at least two candidates who are gonna split the vote, but then there are some more candidates who are running there -- that low enough turn out, split from enough people, hey, he slips in."

2000--Coles becomes President of the U.S. Conference of Mayors

2001--Coles is re-elected for a third full term

2002--Coles and his wife received air travel, hotel accommodations and event admissions from Blue Cross of Idaho from Feb. 14-18 for the 2002 Winter Games in Salt Lake City.

January, 2003--Officials investigate Coles following mounting criticism of City Hall travel and spending by him and his aides.

14 February, 2003--Coles resigns amidst scandal, after the Idaho Attorney General filed two corruption charges against him

February, 2003--City council member Carolyn Terteling-Payne is appointed to serve until the end of the year

May, 2003--Coles indicted by an Ada County grand jury for five felonies stemming from the incident and related activities.

November 2003--Coles pleads an Alford plea to a count of presenting a fraudulent account or voucher and a count of misuse of public money by officers. The remaining charges were dropped as part of a plea bargain.

January 2004--Coles is sentenced to 180 days in jail and three years probation.

January 2007--Coles' felony record is cleared , and his civil rights are restored.

August 2011--The State of Idaho levies a tax lien of $44,691.31 against Coles and his wife for unpaid individual income taxes.

6 September, 2019--Brent Coles announces he will run for mayor once again.