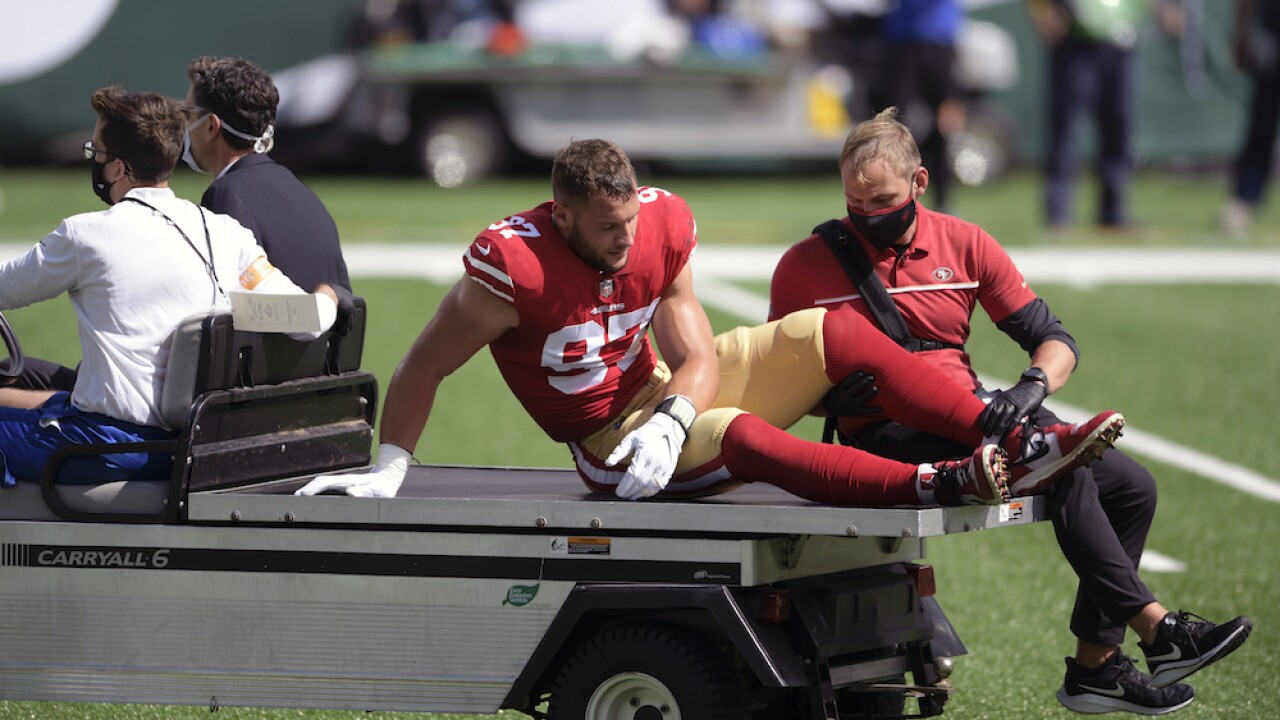 Copyright 2020 The Associated Press. All rights reserved
Bill Kostroun/AP
San Francisco 49ers defensive end Nick Bosa (97) is driven off the field after being injured during the first half of an NFL football game against the New York Jets Sunday, Sept. 20, 2020, in East Rutherford, N.J. (AP Photo/Bill Kostroun)

Artificial turf has been a staple in many pro sports stadiums for about 50 years. And while there's no doubt that AstroTurf and its modern equivalent, FieldTurf, have changed the way pro football and baseball have been played, the surfaces have generally been considered safe for athletes to play on.

But on Monday, the NFL Player's Association formally called on team owners to "proactively change all field surfaces to natural grass," citing higher rates of injuries to players who are playing on artificial fields.

In an open letter, NFLPA President J.C. Tretter — a center for Cleveland Browns in the midst of his eighth NFL season — claimed that most of his teammates preferred to play on grass, noting that his joints felt "noticeably stiffer" after playing on artificial turf.

"The unforgiving nature of artificial turf compounds the grind on the body we already bear from playing a contact sport," Tretter wrote.

In his letter, Tretter wrote that real grass offers more "give," reducing the stress on feet, ankles and knees. He also noted that NFL injury data shows players have a 28% higher rate of non-contact lower extremity injuries when playing on artificial turf.

Tretter's letter comes weeks after the NFL was forced to inspect the artificial turf at MetLife Stadium — home of the Jets and Giants — after several high-profile players were injured in the surface in the opening weeks of the season. Among those hurt during weeks 2 and 3 of the season were 49ers players George Kittle Nick Bosa, Jimmy Garoppolo and Raheem Mostert.

In 2015, Houston's NRG Stadium switched from natural grass to an artificial surface after more than a decade amid player criticism over injury concerns. Due to its retractable roof, groundskeepers grew grass in trays outdoors and then brought the trays indoors and assembled them together with forklifts to form the playing surface. Players claimed the system created seams in the playing surface which led to injuries, and the stadium even faced a lawsuit from a former player who claimed the grass led to a career-ending injury.

Tretter's Browns teammate, wide receiver Odell Beckham Jr., was lost for the season this week after suffering an ACL tear while playing on an artificial surface at Paul Brown Stadium in Cincinnati on Sunday.