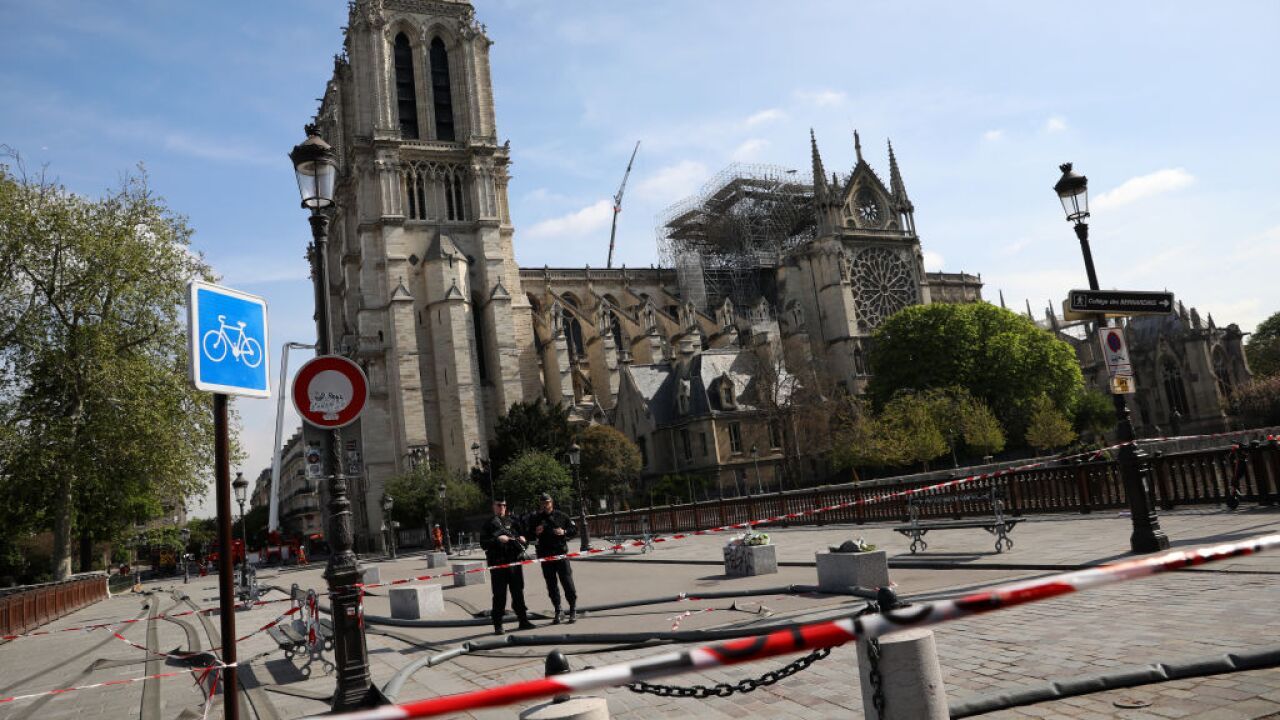 As emergency crews pick through the charred remains of Notre Dame cathedral's ancient wooden beams, which turned the world-famous site into an inferno on Monday night, focus has turned to the investigation into how the blaze started.

Thirty employees working at the Paris landmark before the fire broke out were interviewed by Paris prosecutors on Tuesday, the Paris prosecutor's office said. They included construction workers and Notre Dame security staff.

Interviews will resume on Wednesday, the prosecutor's office said, adding: "Investigations continue to search for the truth and identify the origins and causes of the fire."

On Tuesday, prosecutor Remy Heitz told CNN the cause of the fire was "likely accidental," and that "nothing shows that it's an intentional act."

He said police were interviewing witnesses to ascertain what happened. Scrutiny appears to have fallen on the firms undertaking the renovation of the 150-year-old spire, which collapsed Monday as the flames raged around it.

The fire was extinguished early Tuesday after nine grueling hours, but not before the cathedral's roof had fallen in.

Two policemen and a firefighter -- one of 400 fire personnel deployed to tackle the blaze -- were injured during the operation.

French Junior Interior Minister Laurent Nunez said Tuesday that experts had identified "some vulnerabilities" in the fabric of the building following the devastating fire.

Security guards at the 850-year-old cathedral first heard the fire alarm at 6:20 p.m. local time on Monday, and evacuated the cathedral even though they didn't see any sign of fire, a spokesman for the Paris Fire Brigade told CNN.

Despite the rapid spread and intensity of the fire, authorities announced that some of the cathedral's major relics, artifacts and artwork had been rescued. Some of the most valuable artworks are being held at City Hall, while a number of other pieces are being transferred to the Louvre museum.

The Crown of Thorns, believed to be a relic of the passion of Christ, and the Tunic of Saint Louis were among the venerated artifacts saved, Paris Mayor Anne Hidalgo said.

The copper rooster that sat atop the spire which collapsed in Monday's blaze has been recovered intact, according to the French Ambassador to the United States Gerard Araud. It "contains relics for the protection of Paris," including a spine from the crown of thorns and relics of two Parisian saints, he said on Twitter.

French newspaper Le Parisien, citing a source from the Ministry of Culture, said it was as yet unknown if the relics had survived the blaze.

The show of emotion in the French capital and around the world has been heartfelt.

Hundreds attended a vigil Tuesday evening to grieve and sing hymns in tribute to the fire-ravaged cathedral, gathering in Paris' Place Saint-Michel square, a stone's throw from the devastated cathedral, after marching from the Church of Saint-Sulpice.

Meanwhile, donations towards the restoration have been rising steadily; the total raised so far for the reconstruction of the Gothic masterpiece has topped 800 million euros ($904 million), including gifts of tens of millions of euros from some of France's wealthiest families.

French billionaire Bernard Arnault, chairman and CEO of luxury good consortium LVMH, pledged $200 million, adding to a purse of $55 million promised by the city of Paris.

Cosmetics company L'Oréal, along with The Bettencourt Meyers family and the Bettencourt Schueller Foundation, has donated 200 million euros ($226 million) to help fund the repairs.

The Vatican's Cultural Minister has said the Vatican will offer technical know-how on rebuilding the cathedral, one of Paris' most recognizable landmarks and a symbol of French identity.

"We have the type of know-how that the whole word recognizes as being of high quality," Cardinal Gianfranco Ravasi told reporters. "So I think an eventual future offer by the Holy See will be significant."

The full restoration of Notre Dame Cathedral will take "ten to fifteen years", according to the head of the Group of Companies for the Restoration of Historic Monuments, Frédéric Létoffé.

Speaking at a press conference in Paris on Tuesday, he said that the site would need to be secured before any restoration work can take place.

But the reconstruction of the cathedral, whose foundation stone was laid in the 12th century, could be hindered by a lack of suitable materials.

According to Bertrand de Feydeau, Vice-President of the French Heritage Foundation, there are no trees in France large enough to replace the ancient beechwood beams that burned in the fire.