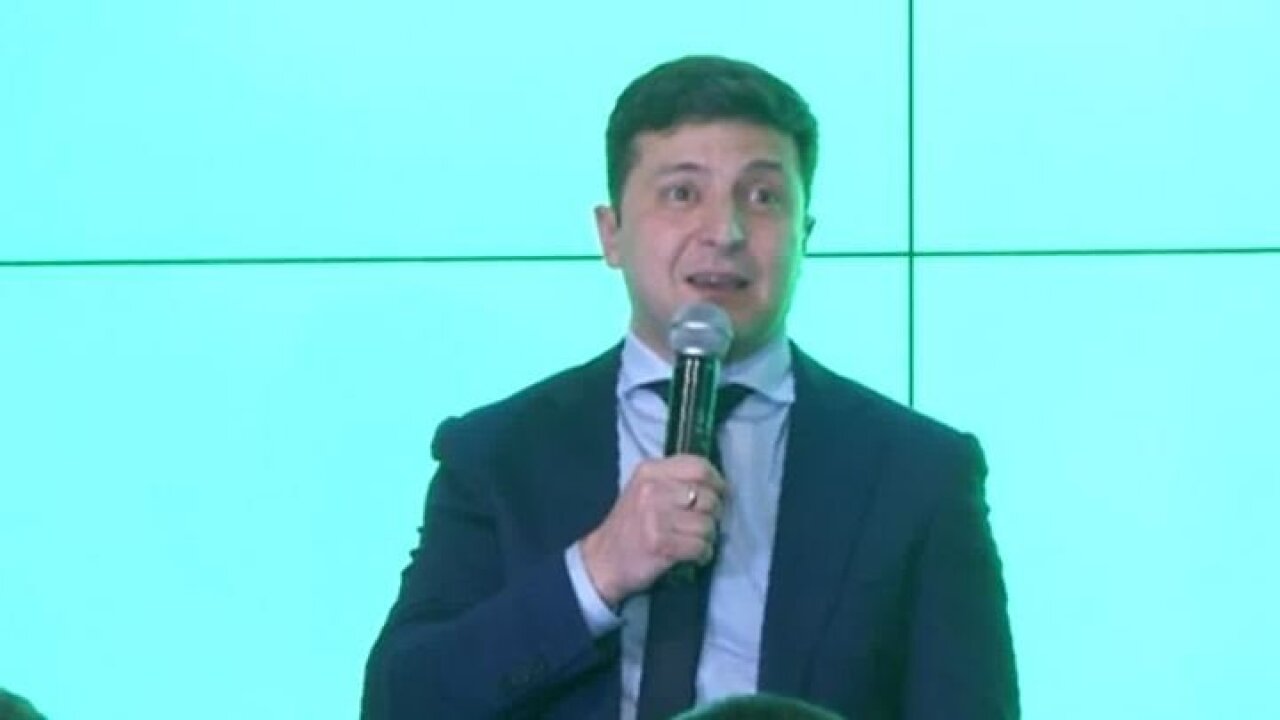 Projections put Zelensky at 73.2%, giving him a significant lead over Poroshenko, who has won just 25.3%, according to an exit poll published by Ukinform.

A second exit poll was expected at 3 pm ET.

Poroshenko's support dwindled under a platform that was focused on playing tough with neighboring Russia, which has been locked in a proxy war with Ukraine for the last five years.

Zelensky's bid for the presidency was initially dismissed as a protest vote and a joke. The actor found fame in his role in the Ukrainian television series "Servant of the People" as a down-and-out schoolteacher who unexpectedly becomes President of Ukraine after becoming famous for an anti-corruption rant that went viral on social media.

But Zelensky's biggest role as presidential hopeful resonated well with an electorate tired of economic turmoil, militant rhetoric and escalating tensions with Russia.

In November, after Russia seized three Ukrainian navy ships and detained 24 sailors in the Kerch Strait -- a strategic waterway that links the Azov Sea with the Black Sea -- Poroshenko's government responded by imposing martial law and warning of impending Russian invasion.

Poroshenko, a supporter of EU membership who came to power in the aftermath of the country's 2013 pro-European Maidan protests, has spent his presidency entangled in an undeclared war with Ukraine's neighbor.

Ukranian troops in the eastern Donbas region have been battling Russian-backed separatists, who have received covert military support from Moscow in a bloody conflict that emerged following Russia's annexation of the Black sea peninsula of Crimea in 2014. That conflict has claimed almost 13,000 lives, with at least 3,321 civilian deaths, according to United Nations estimates.

Poroshenko has also played on Ukraine's bid for greater spiritual independence from Russia, welcoming a decision last October by Bartholomew I of Constantinople, the spiritual and symbolic leader of the Eastern Orthodox church, to recognize an independent Ukrainian Orthodox Church.

He capitalized on his ability to play tough with Russia throughout his campaign, casting Russian President Vladimir Putin as his rival.

"When asked who is my ally, with whom I am ready to unite and coordinate my actions, I answer: my ally is the Ukrainian people," he said in a tweet in late March.

"Who is my opponent? I am not ashamed to say it openly -- this opponent is Putin."

Kremlin spokesperson Dmitry Peskov declined to comment on the first-round vote in March, but did say that he hoped the "party of war" would not prevail.

As Poroshenko ramped up his pro-military, national rhetoric, Zelensky turned the campaign into an entertaining spectacle.

Ahead of the first vote on March 31, Zelensky challenged Poroshenko to a debate in the Kiev's Olympic Stadium, the nation's largest arena -- under the condition that both men would take an alcohol and drug test.

It was broadcast live. And two days before the second-round vote, the two candidates squared off in a raucous debate inside Kiev's Olympic soccer stadium.

In the first round of votes in March, Zelensky took 30.4% of the vote share, nearly double Poroshenko's share. Another top candidate, former Prime Minister Yulia Tymoshenko who had been seen as the likely frontrunner prior to Zelensky's candidacy, received 14.2% of the votes.

Zelensky has no political experience, with a career mainly focused on his business empire -- mostly in entertainment -- which is estimated to be worth tens of millions.

He used that entertainment platform to announce his bid for the presidency on New Year's Eve on Ukraine's 1+1 channel. The country's second-most popular TV station is owned by tycoon Ihor Kolomoisky, who is connected to Zelensky.

The relationship between the two men has been sharply criticized by Poroshenko, who said that 1+1's broadcast of "Servant of the People" was a campaign advertisement.

"My opponents have been pouring shameful lies on me over the past few weeks," Poroshenko said on Twitter. "The main tool of spreading lies during the last months, unfortunately, was 1+1."

Zelensky has yet to outline any clear policies, prompting some critics to raise questions as to how he will steer the country out of its current challenges.

Ukraine is one of Europe's poorest countries, with a growing number of people emigrating for better economic opportunities elsewhere.

The image that Zelensky has projected has been a simple one that stresses a new era of politics that would fight against corruption and oligarchy.

Zelensky has been able to effectively push back on criticism of his connection to Kolomoisky, saying that most TV stations in Ukraine are owned by oligarchs and that his relationship to the 1+1 tycoon is strictly professional.

Ukraine watchers say that Zelensky's television series has functioned as a road map to the way that he might operate as a leader. His rise to power is a testament to Ukrainian population's deep-rooted disappointment in the governing class, which has been befuddled by corruption and economic woes.

The team of advisors he's chosen -- a group of reform-minded technocrats -- appear to be a potential signal towards the type of Ukraine he'd like to lead, one poised to act as a bridge between civil society and politics.