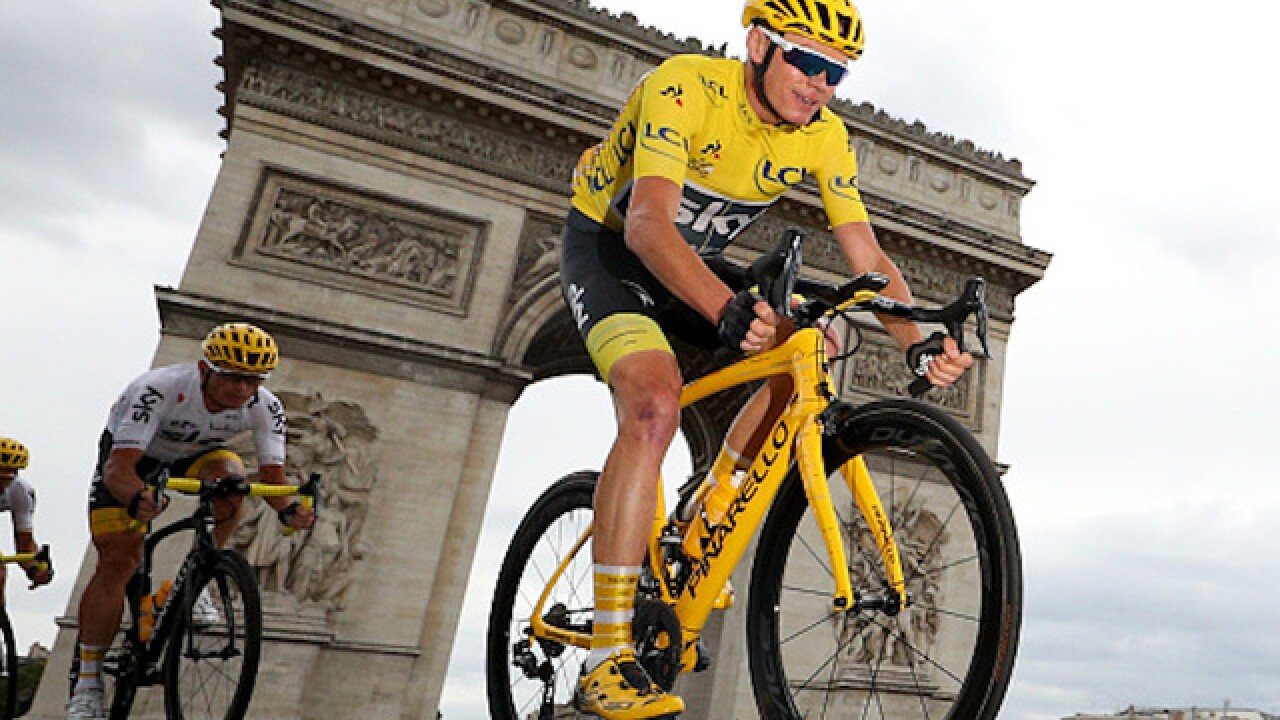 Image copyright 2018 Getty Images. All rights reserved. This material may not be published, broadcast, rewritten, or redistributed.
Chris Graythen
<p>PARIS, FRANCE - JULY 23: Christopher Froome of Great Britain riding for Team Sky in the leader's jersey rides past the Arc de Triomphe during stage 21 of the 2017 Le Tour de France, a 103km stage from Montgreon to the Paris Champs-…lysÈes on July 23, 2017 in Paris, France. (Photo by Chris Graythen/Getty Images)</p>

Controversy and confrontation continued at the Tour de France after four-time winner Chris Froome was involved in a contretemps with a gendarme after the end of Wednesday's stage.

Photos have emerged of the 33-year-old Briton, who was descending the Col de Portet after Stage 17, being accosted by a gendarme and falling off his bike.

Wearing a gray rain jacket over his Team Sky kit and riding his race bike with the No.1 on his frame tag, Froome exchanged words with the gendarme.

It had been a difficult day for the reigning champion who faltered on the final climb, allowing race leader Geraint Thomas to extend his lead.

With four stages remaining, the Welshman -- bidding for a first Grand Tour victory -- leads teammate Froome, who is now third, by two minutes and 31 seconds.

The incident comes two days after the Tour, cycling's most prestigious race, was temporarily halted by protesters and riders were inadvertently tear-gassed.

There were also fears over Froome's safety before the Tour began.

Despite being cleared of anti-doping violations after he was found to have more than the permissible level of asthma drug salbutamol in his urine at last September's Vuelta a España, tensions remained high in the build-up to the three-week race.

Team Sky has employed a personal bodyguard for Froome and additional security, while the Tour has employed extra security in the wake of recent terror attacks in France.

At the pre-race ceremony to present the teams in La Roche-sur-Yon, Froome and his team were greeted with boos, jeers and whistles, while in previous races the Briton has had urine thrown at him and been taunted by fans brandishing giant inhalers.

Riding 60km with a broken kneecap

Meanwhile, Philippe Gilbert has posted an extraordinary picture of severe swelling around his broken knee cap following a crash on Stage 16.

Despite falling heavily, flipping over a low stone wall into a ravine, the 36-year-old continued to ride a further 60 kilometers to complete the stage.

Posting on Twitter Wednesday, his caption read: "When you have a broken knee cap and decide to keep going for another 60km."

A scan revealed he had sustained a fractured kneecap and the Belgian has been ruled out of the Tour.