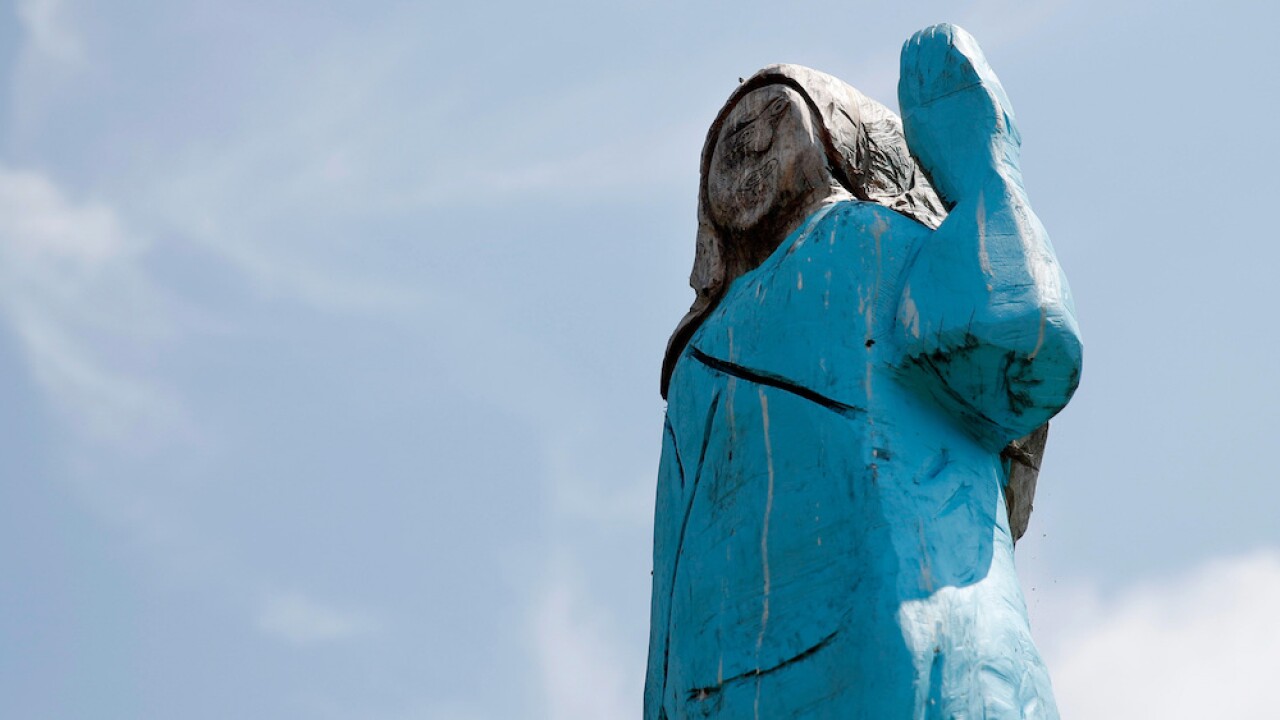 Copyright 2019 The Associated Press. All rights reserved.
Miro Majcen/AP
In this Friday, July 5, 2019 photo, a sculpture created by American artist Brad Downey depicting Melania Trump is seen in her hometown in Sevnica, Slovenia. A life-size sculpture of the U.S. first lady has been unveiled in her hometown of Sevnica, drawing mixed reactions from the locals. (AP Photo/Miro Majcen)

A wooden sculpture of First Lady Melania Trump in her Slovenian hometown was burned by vandals on the Fourth of July, CNN and Reuters report.

Brad Downey, the American, Berlin-based artist that commissioned the sculpture, said he received a call from officials in Sevnica, Slovenia, on July 5, who informed him that the statue had been badly burned the night before.

Downey said he immediately had the statue removed and filed a police report. But he told CNN that he wasn't interested in pressing charges against those responsible.

"I would be curious to see who did it," Downey told CNN.

In recent weeks, President Donald Trump has taken a hard line against vandals who have toppled statues and monuments to historical figures with ties to slavery or imperialism. In a divisive speech at Mt. Rushmore on July 3, Trump called those toppling such monuments as a part of a "far-left fascism" that aimed to "end America."

The statue was erected in 2019 when Downey commissioned a local woodworker to carve the 25-foot sculpture out of a fallen tree trunk. While the sculpture's face isn't immediately identifiable as Melania Trump, she's depicted wearing the light-blue dress she wore to her husband's Inauguration in 2017.

According to Reuters, Downey was inspired to commission the statue given Melania Trump's status as an immigrant despite her husband's hard-line stance of immigration throughout his time in office.