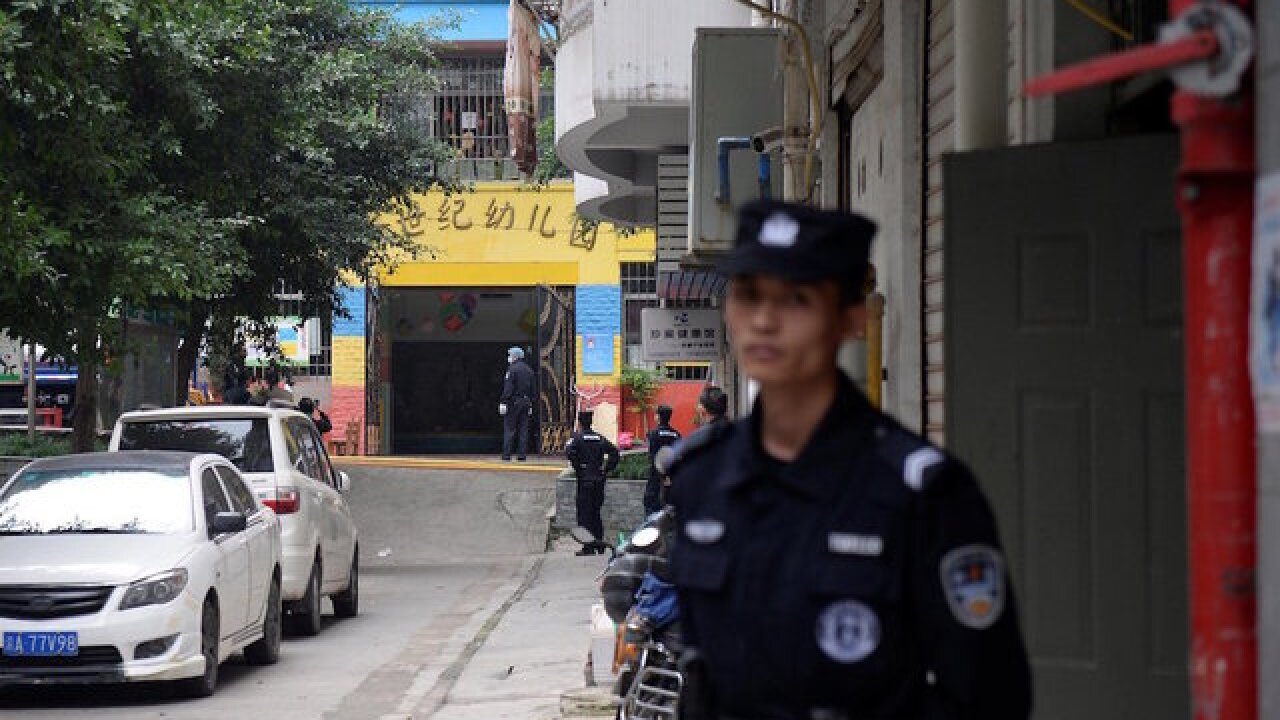 Copyright 2018 Scripps Media, Inc. All rights reserved. This material may not be published, broadcast, rewritten, or redistributed.
Reuters
<p>At least 14 children stabbed at kindergarten in China</p>

A woman wielding a kitchen knife has attacked at least 14 children at a kindergarten in Chongqing in central China, local police said Friday.

Chongqing City Banan District police said the children were slashed as they walked back to class after their morning exercises at Yudong New Century Kindergarten about 9.30 a.m. local time.

Videos circulating on Chinese social media showed small children bleeding from severe cuts to their faces at the entrance of the kindergarten as stunned adults looked on.

School security guards and staff restrained the 39-year-old attacker and took her into custody. Video from the scene appeared to show angry onlookers attempting to hit and kick the woman after she was detained.

Chongqing resident Xia Yang said the attack had shocked residents of the city, a metropolis of some 30 million people.

Nearby residents said the kindergarten doesn't have any outdoor space for the children, and they have to use a local public park for their morning exercises.

"It happened when the children were entering the school gate ... The attacker just ran at them with a knife. The teachers were dumbstruck," said Zhang Jing, who lives close to the school.

He told CNN old people out shopping for groceries had intervened to stop the attack.

An unknown number of students were taken to a nearby hospital following the incident, according to police.

Video from the hospital showed adults wailing in grief as children covered in blood were rushed from ambulances into the building. In another video, a child whose head is wrapped in bandages was pushed past on a gurney, as crowds looked on.

Zhang said after the knife attack and recent scandals over faulty medicine for children, he's increasingly skeptical of the government's ability to look after his own daughter.

"It is terrifying. The vaccines are faulty, the food is faulty ... and right now even the security is problematic," he told CNN.

There is no information about a potential motive for the attack. Police are continuing to investigate.

Friday's incident isn't the first time school children in China have been hurt by people wielding knives. Nine students were killed at a middle school in Shaanxi province in April by a 28-year-old man who was later sentenced to death.

According to state media Xinhua, the killer had wanted to "get revenge on his former classmates who had teased him" and had bought the knives online.

In 2017, 11 students were injured after a man climbed over the wall of a kindergarten with a knife and began attacking them.