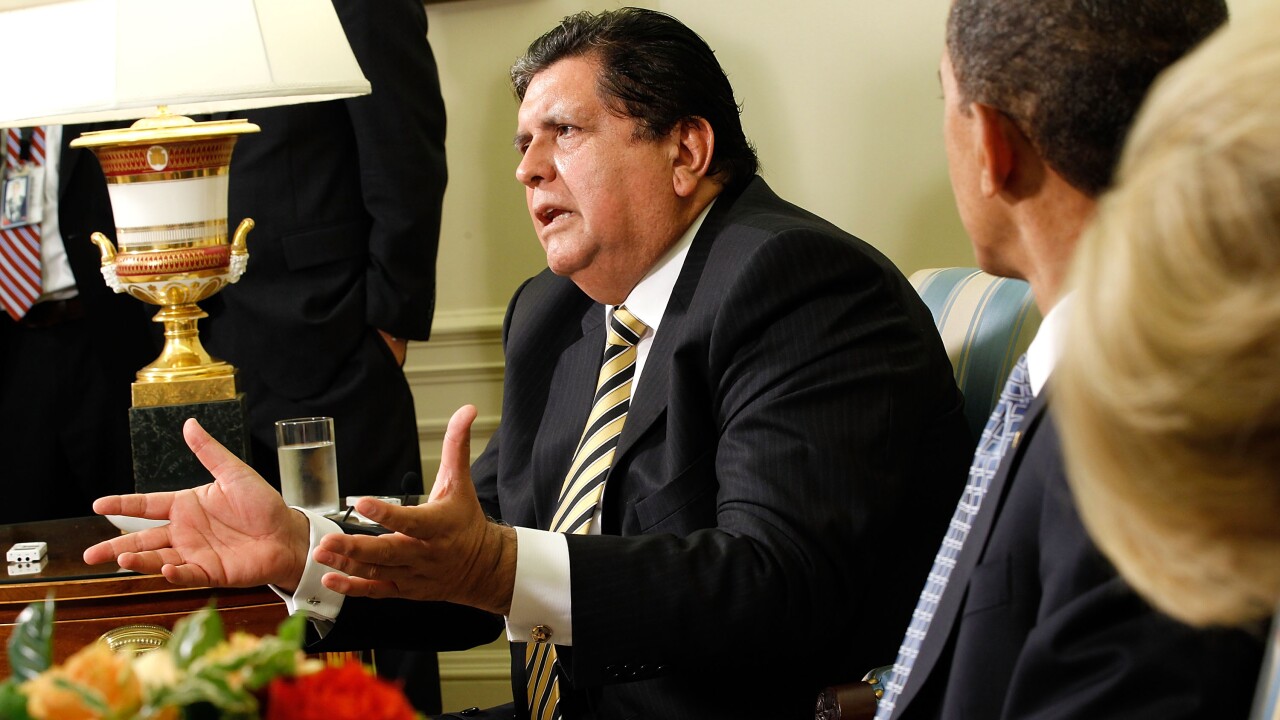 Former Peruvian president Alan Garcia died from a self-inflicted gunshot wound to the head as police were preparing to arrest him on corruption charges Wednesday.

His death was confirmed by current President Martin Vizcarra, who expressed his condolences over Twitter.

"Devastated by the death of former President Alan Garcia, I send my condolences to his family and loved ones," Vizcarra wrote.

Garcia, 69, was rushed to the hospital in the capital Lima on Wednesday in critical condition, the state news agency Andina reported.

"The former president made the decision to shoot himself," his lawyer Erasmo Reyna said outside the Casimiro Ulloa hospital.

Carlos Morán, the interior minister, said in an interview with CNN affiliate TV Peru that police arrived at Garcia's home at 6.30 a.m. to execute an arrest warrant.

When police arrived, Garcia asked them to call his attorney and then he entered his bedroom, Morán said. Moments later, a gunshot was heard. Officers forced entry into the bedroom and found Garcia in a sitting position with a wound to the head.

The ministry of health later issued a statement confirming Garcia had an entry and exit wound to the head.

Garcia, who served as president from 1985 to 1990 and from 2006 to 2011, was under investigation for bribery in connection with a massive corruption scandal that has engulfed a number of former Latin American leaders.

Sources close to the investigation told CNN that Peruvian authorities had issued an order for his immediate arrest.

Garcia is accused of receiving kickbacks from one of Latin America's largest construction firms -- the Brazil-based company Odebrecht -- during the building of an electric train for the Lima metro while he was president during his second term. He has denied the claims.

In his most recent tweet, posted on Tuesday, Garcia said there was "no shred of evidence" against him, accused Peruvian prosecutors of "SPECULATION," and said he had "never sold out and that is proven."

In November last year, Garcia had requested asylum at the Uruguayan embassy after a judge banned him from leaving the country for 18 months. The Uruguayan government denied the request in December.

Odebrecht is accused of doling out nearly $800 million in bribes between 2001 and 2016 to get contracts from governments to build roads, bridges, dams and highways.

Authorities say Odebrecht officials shipped cash across the globe -- from one shell bank account to the next -- en route to politicians' pockets in a dozen countries, including Peru, Mexico, Venezuela, Colombia, Argentina, and Mozambique. Some of the bribes filtered through the United States.

The corruption scandal -- one of the biggest in modern history -- implicated several former Latin American presidents.

Last year, Peruvian President Pedro Pablo Kuczynski resigned one day before the congress voted on his impeachment. He continued to deny any wrongdoing in the Odebrecht scandal.

Ecuador suspended Vice President Jorge Glas , who was later sentenced to six years in prison in December 2017 for receiving $13.5 million in bribes from Odebrecht.

And former Brazilian president Luiz Inacio Lula da Silva is serving a 12-year sentence for corruption and money laundering, including allegedly allowing Odebrecht to pay for his family's vacation home.