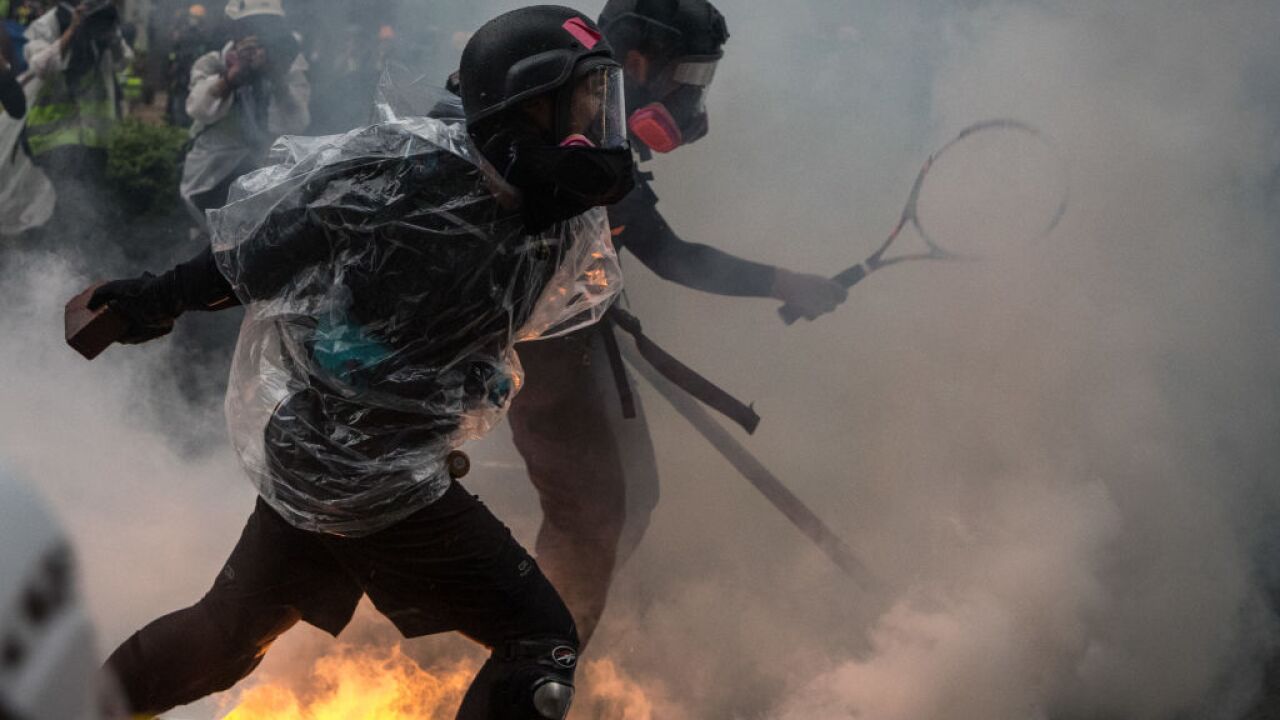 A Hong Kong police officer fired a live shot into the air as protesters squared off against police armed with water cannons Sunday, in one of the most violent nights seen since mass pro-democracy protests began 12 weekends ago.

Commentary in Chinese state media Sunday signaled that Beijing is losing patience with protesters. State-run media outlet Xinhua said the central government had the "authority" and "responsibility" to intervene and prevent riots in Hong Kong -- reiterating comments made by former Chinese leader Deng Xiaoping, who oversaw Hong Kong's return to China from British rule under a dual governance setup, which gives the city a separate legal system with more democratic freedoms until 2047.

Sunday's pro-democracy protests had begun peacefully. Thousands braved a thunderstorm to march from Kwai Chung to Tseun Wan district, in the city's New Territories. They showed up dressed in plastic ponchos and rain coats, and huddled under a sea of umbrellas.

But the violence returned Sunday evening, when a smaller group of protesters broke away from the day's main police-approved march -- now a familiar feature of the protests. They used traffic cones and street railings to build makeshift barricades in the street, and threw bricks, metal poles, and petrol bombs at police. Twenty-one police officers were injured, police said Monday.

Tear gas was initially deployed but failed to disperse the group.

Later, a water cannon was used against a makeshift barricade, marking the first time water cannon vans had ever been used in the city. Protesters were pushed back, but again the crowd didn't disperse.

As the violence escalated, six officers drew their pistols after being surrounded by armed protesters and one officer fired a live shot into the air, police said.

The Hong Kong police said in a statement that the officers were "surrounded, under attacks and facing threats to life" and one officer fired "a warning shot to the sky without any other choices."

In a statement, police said protesters' actions were "outrageous and have overstepped the bottom line of a civilized society," and added that they "will take relentless enforcement action to bring the persons involved to justice."

In total, 86 people were arrested over the weekend for unlawful assembly, including a 12-year-old boy and a 51-year-old.

The 12-year-old's arrest highlights the presence of young children at some violent scenes of the protest movement, days before the school semester begins. A Hong Kong spokesperson told CNN that it is possible for the child to be charged under Hong Kong laws.

According to organizers on the messaging platform Telegram, the march was intended to reiterate protesters' core demands -- withdrawal of an extradition bill, the dropping of riot charges of those arrested, an independent inquiry into police and greater democratic reforms -- as well as express opposition to alleged police brutality.

Violence also broke out Saturday, after thousands in the city's east Kwun Tong district marched for the movement's five demands, and against the government's installation of "smart" environmental monitoring lampposts, which have sparked privacy concerns.

Demonstrators attempted to tear down or dismantle some of the city's 50 newly-installed so-called "smart lampposts" -- which have cameras and sensors -- in a protest against perceived government surveillance. The Hong Kong government said the lamp posts, which are intended to track data such as air quality and traffic flow, are not equipped with facial recognition software and "would not infringe upon personal privacy."

Police arrested 32 people on Saturday -- 22 men and 10 women between the ages of 15 and 22 -- on suspicion of weapons possession, assault of police and unlawful assembly.

The stand off brought an end to a week of relative calm in Hong Kong, which had seen numerous clashes between protesters and police since early summer. After tear gas was fired nearly every weekend in July, last weekend saw an estimated 1.7 million people brave the heavy rain and heat to march peacefully. The calm continued through the week, with protesters peacefully creating a human chain across the city on Friday -- the 30th anniversary of the Baltic Way human chain.

However, senior police officials, who spoke on condition of anonymity, said this week that officers had been targeted and exposed online even while there was temporary peace on the streets. The police said officers' personal data, contact information, home addresses and more had been shared online, and accused protesters of threatening officers' families.

They called the doxxing tactic "a kind of psychological war," and said they had arrested 16 people on suspicion of disclosing personal data without consent and causing harm, and unauthorized access to a computer.

Families of police speak out

A group of Hong Kong Police relatives held their own rally on Sunday, calling for a communication platform between the police and the public "to mend the broken relationship," and asking the police to act "with malice or ill-will toward none," according to a Facebook post by organizers .

The group of about 400 attempted to deliver a letter to Chief Executive Carrie Lam, saying that their relatives in the police force should not be "used as a shield" and that Lam should "settle the political issue with politics."

The group did not denigrate the protest movement, instead said that the police force were "being pushed by political issues to confront the public."

"Moreover, the mismanagement within the HKPF (Hong Kong Police Force) and malpractices of some frontline police officers all caused the police-civilian relationship to fall into a tragic abyss."

Hong Kong has been protesting now for almost three months. It all began in June, sparked by a controversial bill that would have allowed extradition to mainland China. Although the bill has since been suspended, protesters' demands have evolved and expanded to include Lam's resignation, the full withdrawal of the bill, and universal suffrage.

Lam has condemned violence and pledged greater communication with the public, but many feel that's not enough: some protesters say they will continue demonstrating until she responds to their demands.

The nonstop protests have taken a toll on everyone involved -- on Saturday, Lam had posted a lengthy statement on Facebook appealing for peace and dialogue.

"After more than two months, everyone is tired. Can we sit down and talk about it?" she said, acknowledging that there were deeper societal problems beyond the immediate violence that needed to be addressed."