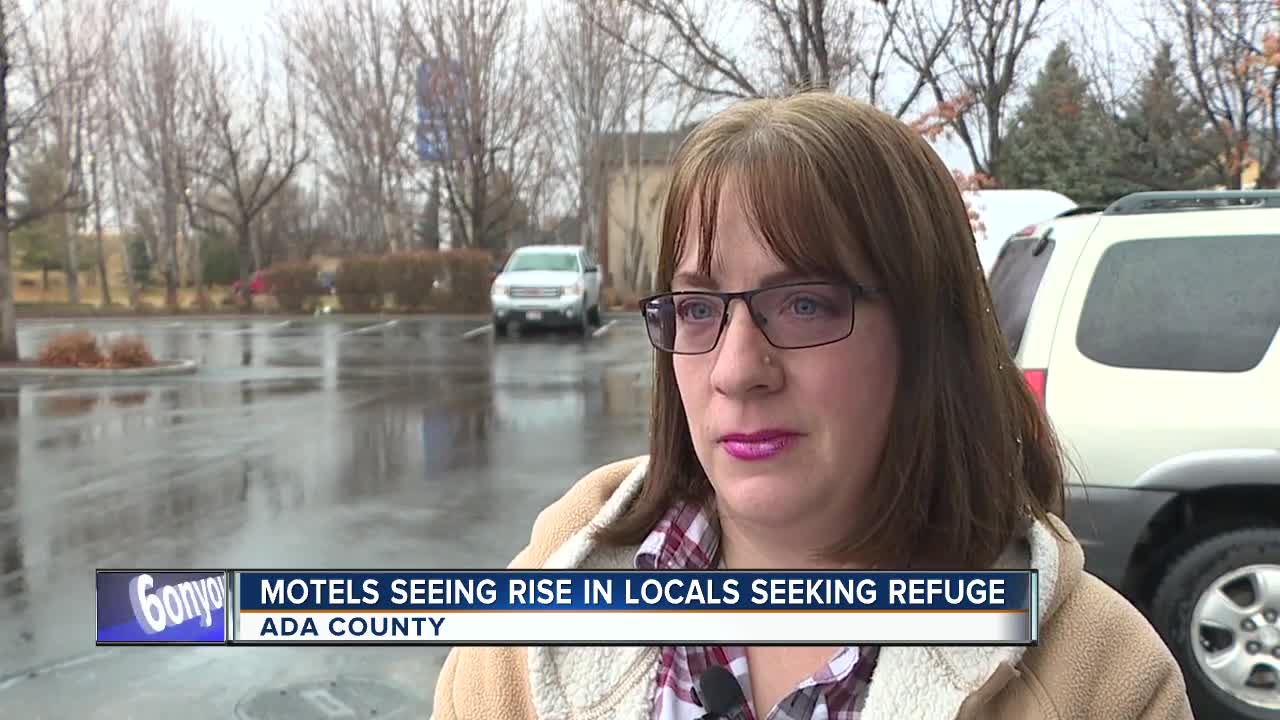 It's not just truck drivers and tourists seeking shelter in Ada County motels. There's a profile many motel staffmembers tell me they're continuously seeing: the faces of locals in desperate transition. But hope could be on the horizon.

ADA COUNTY, Idaho — Amid sky-rocketing rents and stagnant wages, shelter directors in Boise say they're seeing more families struggling with homelessness for the first time. But it's not just shelters playing a key role in the local affordable housing crisis -- more and more people are turning to motels to stay housed.

"My kids keep me strong, but it's hard -- you're supposed to be able to provide for your family," said Claire Wallace.

Wallace recently left a job at the front desk of the Motel 6 Meridian.

She said the number of locals she was serving just kept rising.

"There was a lot of people just from the Ada County area coming in either looking for a place to stay, trying to get weekly quotes, or families that were actually staying in there. -- either staying for a week or until money ran out -- and it was increasing each month that I saw," said Wallace.

Staff at the Motel 6 in Meridian aren't the only ones -- one in four of the other Ada County motel representatives who responded to my survey say they're seeing a rise in locals seeking rooms:

Staff who responded no:

"We're all one paycheck away from being booted out onto the street," said Wallace.

Stephanie Day, the executive director at CATCH -- a program that pairs Ada County families in need with housing -- says they're seeing it too.

"And they're running out of money, and they're not sure what to do, and they're kind of desperate -- so that is definitely on the rise," said Day. "We know that a lot of times people are ending up in that situation because they're fleeing domestic violence, and/or they've been renting for a long time, and the property's been sold and the new landlord is raising the rent and they can't afford that rent anymore."

Wallace says one of the families she helped house at Motel 6 had been in their home for more than ten years before rent increases pushed them out. And-- "there's at least three families that are staying there now," said Wallace.

But Wallace is not just seeing it from second-hand experience -- before moving into her friend's non-operational fifth wheel, where her family is now, She says they too at one point had to live in a motel. And their ordeal isn't over.

"I'm on the wait-list with CATCH, and Section 8 -- we got approved for -- and so we have a wait-list. CATCH has about a year-plus wait-list and we've been on it since July and haven't moved up," said Wallace.

"How are you feeling, are you hopeful?" I said.

"Discouraged," she said. "It's hard, especially this time of year."

As I previously reported -- since this interview with Wallace -- a small ray of hope for families like Wallace's came from Tuesday's Boise City Council meeting.

"Having housing -- it's the basic need being met," said Councilmember Lisa Sánchez, City of Boise.

The council unanimously approved $2 million Tuesday for an effort to end family homelessness by 2025 in Ada County.

"All of Ada County will benefit from this campaign," said Day.

This increases the likelihood that city and county officials could eventually bring the wait-list at CATCH housing down to net zero.

Since this news, Wallace wrote to me in a Facebook message saying she is hopeful for families like hers in this situation.

Though motels may be housing more locals, Day said, however, that isn't really the best way to go, because motels can be pricey long-term. She said many people are depleting their funds before they even get to the point where they owe a security deposit and first month's rent for a unit.

Questions about homelessness and affordable housing played a big role in Boise's recent mayoral election, and it's an issue I've been tracking very closely for you. It's something I've been watching develop and I'll continue to bring you these stories.