By: PolitiFact
Posted at 1:33 AM, Feb 07, 2016
Fact checks in this article:
FACT CHECK 1 - Ted Cruz: CNN first said Ben Carson was 'taking a break from campaigning'
Texas Sen. Ted Cruz’s campaign wrongly suggested in the moments before the Iowa caucuses that Ben Carson would suspend his campaign. It wasn’t true, and Carson supporters were furious.
Cruz has apologized. But he said at the Feb. 6, 2016, Republican debate that the real culprit was CNN.
"Let me tell you the facts that occurred for those who are interested in knowing," Cruz said. "On Monday night, about 6:30 p.m. CNN reported that Ben was not going from Iowa to New Hampshire or South Carolina. Rather he was ‘taking a break from campaigning.’ They reported that on television. CNN’s political anchors Jake Tapper and Dana Bash and Wolf Blitzer said it was ‘highly unusual’ and ‘highly significant.’ My political team saw CNN’s report, breaking news, and forwarded that news to our volunteers."
According to CNN, what Cruz said "is categorically false."
We agree that Cruz's description is highly misleading.
Here’s how it all unfolded on caucus night.
Between 6:41 p.m. and 6:43 p.m. central time, CNN’s senior political reporter Chris Moody sent a series of tweets.

Ben Carson will likely speak at his victory party in Iowa before caucus results are in so he can catch a flight.

Ben Carson's campaign tells me he plans to stay in the race beyond Iowa no matter what the results are tonight.

Carson won't go to NH/SC, but instead will head home to Florida for some R&R. He'll be in DC Thursday for the National Prayer Breakfast.

Two minutes later, CNN’s Dana Bash and Jake Tapper report Carson’s travel plans during a live broadcast of the caucuses. Bash and Tapper both say that this is "very unusual" and anchor Wolf Blitzer adds that it is "very significant news." But CNN does not say Carson is suspending his campaign. Here’s a transcript:

Tapper: "CNN has learned some news about the man who, at least according to polls, is in fourth place here in Iowa. Now, Dana, a week from tomorrow, we’re all going to be doing this again for the New Hampshire primary. So almost every single candidate is going to be going directly from here to New Hampshire to campaign — except for the man in fourth place, who a few months ago was in first place here, Dr. Ben Carson. What have we learned?"
Bash: "That’s right. We should say that our Chris Moody is breaking this news, that Ben Carson is going to go back to Florida to his home, regardless of how he does tonight here in Iowa. He’s going to go there for several days. And then afterwards, he’s not going to go to South Carolina. He’s not going to go to New Hampshire. He’s going to come to Washington, D.C., and he’s going to do that because the National Prayer Breakfast is on Thursday. And people who have been following Ben Carson’s career know that that’s really where he got himself on the political map, attending that prayer breakfast, and really giving it to President Obama at the time. And he became kind of a hero among conservatives, among evangelicals especially."
Tapper: "But it’s very unusual..."
Bash: "Very unusual."
Tapper: "...to be announcing that you’re going to go home to rest for a few days, not going on to the next site. Plus, he’s already announced that he’s going to be coming out and speaking at 9:15 local and 10:15 Eastern, no matter whether or not we know the results, because he wants to get home and get ahead of the storm."
Bash: "Look, if you want to be president of the United States, you don’t go home to Florida. I mean, that’s bottom line. That’s the end of the story. If you want to signal to your supporters that you want it, that you’re hungry for it, that you want them to get out and and campaign, you’ve got to be out there doing it too. And he’s not doing it. It’s very unusual."
Tapper: "Very unusual news that CNN has just learned. CNN’s Chris Moody breaking the story. Wolf, back to you in Washington."
Blitzer: "Very significant news indeed, guys, thanks very much."

During the discussion, CNN's lower-third graphic does say "CAMPAIGN: CARSON TO TAKE A BREAK AFTER IOWA."
At 6:53 p.m., Carson spokesman Jason Osborne tweets.

.@RealBenCarson will be going to Florida to get fresh clothes b4 heading back out on the campaign trail. Not standing down.

Three minutes later, according to Breitbart, the Cruz campaign sends an email telling supporters, "The press is reporting that Dr. Ben Carson is taking time off from the campaign trail after Iowa and making a big announcement."
Here’s an image of the email via the Huffington Post:

Things get worse at approximately 7 p.m., when the caucuses opened. Cruz supporters using the campaign’s mobile app received a message informing them that Carson "will stop campaigning after Iowa." 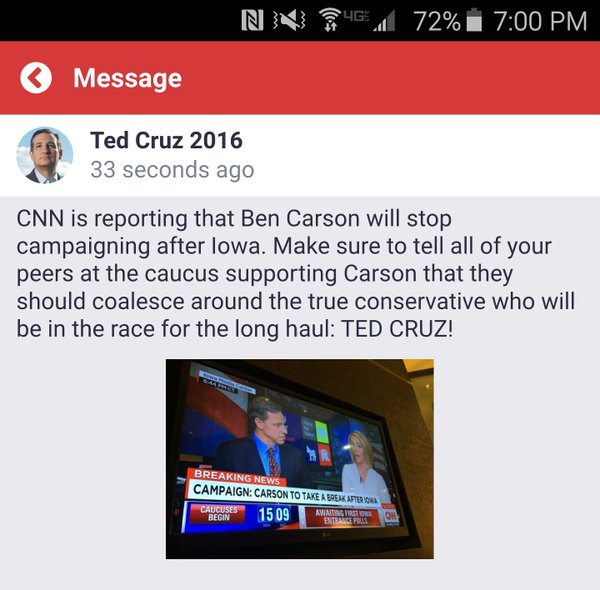 At 7:07 p.m., Cruz surrogate  and Iowa Rep. Steve King retweets Moody and adds to it.

#iacaucus Skipping NH & SC is the equivalent of suspending. Too bad this information won't get to all caucus goers. https://t.co/lW5Js50EMA

An hour later, King sends another Tweet to the same effect.

Carson looks like he is out. Iowans need to know before they vote. Most will go to Cruz, I hope. https://t.co/lW5Js50EMA

For what it’s worth, Cruz acknowledged earlier in the week that CNN’s reporting that night was accurate.
"CNN got it correct. Miracles happen. But that is part of the democratic process to let Iowa causers know, here is the news that is breaking. And it is relevant," Cruz said Feb. 3.
Our ruling
Cruz said that it was CNN, not his campaign, that first reported that Carson "taking a break from campaigning," and his campaign forwarded that news to his supporters.
Cruz's campaign took a nugget of information from CNN and took it too far. CNN reported that Carson was "to take a break after Iowa," while simultaneously noting that Carson would ultimately continue campaigning.
The Cruz campaign sent messages on its app anyway, saying that Carson would "stop" his campaign. A key surrogate said that Carson was doing "the equivalent of suspending." That’s more than simply "forwarding" news.
We rate Cruz’s claim False.
Data curated by InsideGov
FACT CHECK 2 - Donald Trump, on the Iraq War: "I was the one that said, ‘Don’t go, don’t do it, you’re going to destabilize the Middle East.’ "
Donald Trump says he has the temperament to be president, and his position against the Iraq War proves it.
"The War in Iraq — I was the one that said, ‘Don’t go, don’t do it, you’re going to destabilize the Middle East,’ " the Republican front runner said at the Feb. 6, 2016, New Hampshire GOP debate.
Several media outlets have cast doubt on Trump’s claim that he spoke out against the Iraq War, pointing out that he didn’t appear to take any public position on the war until after the March 2003 invasion. Because Trump keeps making this kind of claim, we decided to put it on PolitiFact’s Truth-O-Meter.
We searched newspaper articles and television transcripts from 2002 and 2003, during the debate leading up to the Iraq War. We didn’t find any examples of Trump unequivocally denouncing the war until a year after the war began.
Trump’s comments
We only found one instance where Trump discussed the war before it started. On Jan. 28, 2003, just under three months before the invasion, Fox News’ Neil Cavuto asked Trump whether President George W. Bush should be more focused on Iraq or the economy.
Speaking of Iraq, Trump said, "Well, he has either got to do something or not do something, perhaps, because perhaps shouldn't be doing it yet and perhaps we should be waiting for the United Nations, you know. He's under a lot of pressure. I think he's doing a very good job. But, of course, if you look at the polls, a lot of people are getting a little tired. I think the Iraqi situation is a problem. And I think the economy is a much bigger problem as far as the president is concerned."
Trump seems to be skeptical of the mission in Iraq here, and he said the economy should be a higher priority. But he did not say anything that resembles his claim: that Bush should not proceed because a war would  "destabilize the Middle East."
The United States invaded Iraq on March 19, 2003.
A week later, Trump gave differing takes. At an Academy Awards after party, Trump said that "the war’s a mess," according to the Washington Post. He told Fox News that because of the war, "The market’s going to go up like a rocket."
Trump’s harshest criticism came more than a year into the war, in an August 2004 article in Esquire:

"Look at the war in Iraq and the mess that we're in. I would never have handled it that way. Does anybody really believe that Iraq is going to be a wonderful democracy where people are going to run down to the voting box and gently put in their ballot and the winner is happily going to step up to lead the country? C'mon. Two minutes after we leave, there's going to be a revolution, and the meanest, toughest, smartest, most vicious guy will take over. And he'll have weapons of mass destruction, which Saddam didn't have.
"What was the purpose of this whole thing? Hundreds and hundreds of young people killed. And what about the people coming back with no arms and legs? Not to mention the other side. All those Iraqi kids who've been blown to pieces. And it turns out that all of the reasons for the war were blatantly wrong. All this for nothing!"

He told CNN’s Larry King in November 2004, "I do not believe that we made the right decision going into Iraq, but, you know, hopefully, we'll be getting out."
Clearly Trump opposed the Iraq War in its early years. There’s no evidence, though, that he advocated against the war in the first place.
Our ruling
Regarding the Iraq War, "I was the one that said, ‘Don’t go, don’t do it, you’re going to destabilize the Middle East.’ "
Maybe Trump felt this way privately, but he made no publicly reported comments in the lead up to the Iraq War that reflect this sentiment. We could only find one example of Trump commenting on the Iraq War before the invasion, and he seemed apprehensive but not vehemently opposed to the operation. He only started publicly denouncing the war after it started.
Trump makes it sound like he stood on a railroad to try to stop the Iraq War train in its tracks. In reality, by the time he got around to forcefully criticizing the war, that train had already left the station. We rate his statement Mostly False.
Data curated by InsideGov

FACT CHECK 3 - Marco Rubio: "The American people will not support doing anything about people that are in this country illegally until the law is enforced first."