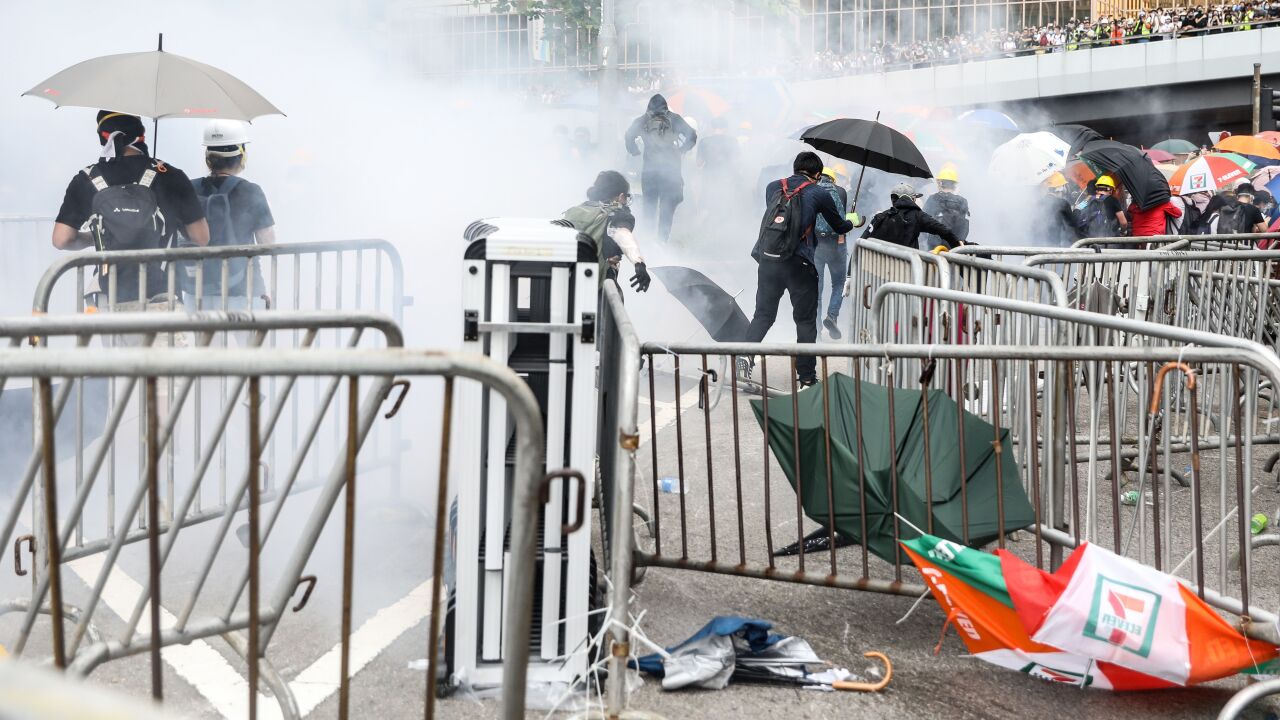 At least two people are in serious condition in Hong Kong hospitals after a long day and night of violence between police and protesters.

An estimated 5,000 riot police fired tear gas, pepper spray, rubber bullets and bean bags at tens of thousands of protesters as they forcibly cleared streets around the city's Legislative Council in Admiralty.

Confrontations went late into Wednesday night as crowds of mostly young, college-aged protesters were pushed back from the Legislative Council complex towards the city's Central district.

At least 79 people were injured in the violence, with two remaining in serious condition, according to a spokesman for Hong Kong's information bureau.

At a press conference Thursday evening, Hong Kong Police Commissioner Steven Lo Wai-chung said 11 people had been arrested over the course of Wednesday's protests on charges of disorderly conduct in a public place, unlawful assembly, and assaulting a police officer.

He said 22 police sustained injuries during the protests, although it is not clear whether the 79 injured includes the number of police who were hurt.

Lo said that protestors acted violently in an organized manner using bricks and sharpened metal poles to attack police. "We had no choice but to escalate the use of force," Lo said. "We strongly condemn the violent behavior of the rioters."

Speaking in English, his second language, Lo stressed that police were in control of the situation and would "definitely not" seek additional assistance from the Chinese People's liberation Army "at the moment."

In a series of statements Thursday, the Legislative Council said no meeting to discuss the extradition bill would be held on Thursday or Friday -- a partial victory for protesters and opposition lawmakers, who have been calling for it to be postponed or dropped altogether.

"Announcement will be made once the President determines the time of the meeting," a statement said.

Central government offices next door to the legislature would also closed be Thursday and Friday, according to a statement.

There was an extremely heavy police presence around the Legislative Council building and the city's Admiralty area Thursday. Dozens of protesters were also in the area, though their presence was very small compared to the previous day. Photos and videos on social media showed protesters cleaning up litter and debris leftover from Wednesday's clashes.

Although Hong Kong is part of China, it has separate laws that follow a UK-style system and no capital punishment, unlike mainland China. Many people fear that the proposed extradition law means they could be taken from Hong Kong by Chinese authorities for political or inadvertent business offenses.

"The protesters joined the rally with Hong Kong's best interests at heart," pro-democracy lawmaker Leung Yiu-chung said at a presser. "The government has no heart at all."

Police and authorities were completely wrong-footed Wednesday morning as protesters ran into roads around the legislature and blocked them. Within an hour, the crowd was in full control of Harcourt and Lung Wo roads, two main traffic arteries in central Hong Kong.

Scenes around midday were highly reminiscent of the Hong Kong's previous mass protest in 2014, known as the Umbrella Movement . Opposition lawmakers congratulated the young protesters for their success in blocking off the Legislative Council and preventing the day's scheduled debate from going forward.

"(This) boils down to a display of people power in Hong Kong, a display in particular of young people power," lawmaker Claudia Mo told the tens of thousands who had gathered outside the Legislative Council building.

"At the end of the Umbrella Movement, didn't we say, 'we will be back'? And now, we are back!"

Thousands of protesters sat around chatting happily, occasionally joining in with triumphant chants. As it reached midday, they were joined by many office workers from nearby buildings in Admiralty.

That happy atmosphere took a dark turn as protesters continued to push their lines forward and met heavy police resistance around the central government offices on Tim Wa Avenue.

After briefly seizing control of that road, protesters were forced back by repeated police tear gas barrages, pepper spray and baton charges. Police in heavy riot gear then cleared the street.

From there, everything descended into chaos as a huge police deployment moved towards the main Harcourt Road protest camp from multiple directions, eventually forcing protesters onto roads leading towards Central and Wan Chai.

Under Hong Kong law, rioting is considered a serious offense, punishable by up to 10 years in prison.

On Thursday, Lo confirmed that police had received 19 complaints relating to police behavior, including allegations of assault. He said police would investigate.

The extradition bill has been met with widespread opposition since it was first mooted, including from the city's traditionally conservative business community.

Wednesday's protests came three days after a march in which organizers said more than a million people took part -- or roughly one in seven Hong Kong residents. Police gave a lower figure of 240,000 but the peaceful protest was by most independent measures the largest since the city's handover from British to Chinese control in 1997.

Despite the mass demonstrations, the government, led by Hong Kong Chief Executive Carrie Lam, has refused to withdraw the extradition bill, saying it is needed to plug loopholes to prevent the city from becoming a haven for mainland fugitives.

On Monday, Lam said safeguards had been added to the bill to protect human rights and had received no instruction from Beijing to push it forward. Hong Kong's lawmakers had planned to dedicate 66 hours across five days to debating the bill.