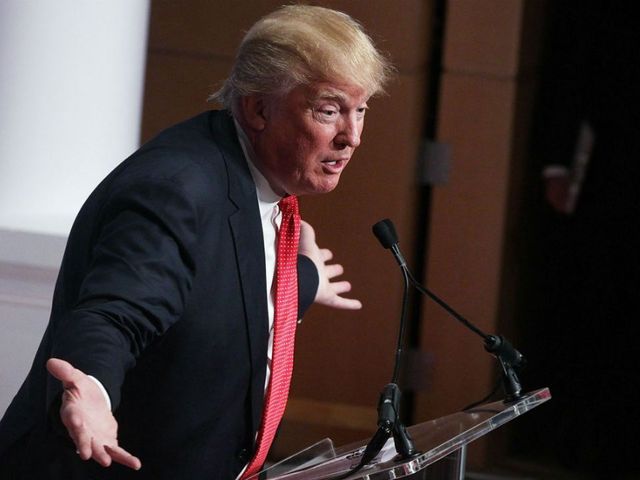 <p>Donald Trump wants<a href="https://www.donaldjtrump.com/press-releases/donald-j.-trump-statement-on-preventing-muslim-immigration" target="_blank">&nbsp;to stop Muslim immigration</a>&nbsp;into the U.S. until &quot;representatives can figure out what is going on.&quot; Meanwhile, we&#39;re trying to figure out what&#39;s going on with Trump&#39;s sources.</p><p>For starters, Trump&#39;s website says<a href="http://www.pewresearch.org/fact-tank/2015/12/07/muslims-and-islam-key-findings-in-the-u-s-and-around-the-world/" target="_blank">&nbsp;Pew Research</a>&nbsp;supports his claim that many Muslims hate Americans. Only problem,&nbsp;<a href="https://www.donaldjtrump.com/press-releases/donald-j.-trump-statement-on-preventing-muslim-immigration" target="_blank">he didn&#39;t link to this information</a>&nbsp;and the most recent data Pew published on Islam doesn&#39;t support that at all. (Video<a href="https://www.youtube.com/watch?v=wAlddz2mfg0" target="_blank">&nbsp;via Fox News</a>)</p><p>Monday, Pew published key findings about Muslim American&#39;s throughout the years.&nbsp;<a href=" Muslim Americans are more likely than Muslims in many other nations to have many non-Muslim friends." target="_blank">One finding is</a>&nbsp;that Muslim American&#39;s are more likely than Muslim&#39;s worldwide to have non-Muslim friends.&nbsp;</p><p>Trump actually linked&nbsp;<a href="https://www.centerforsecuritypolicy.org/2015/06/23/nationwide-poll-of-us-muslims-shows-thousands-support-shariah-jihad/" target="_blank">to the Center for Security Policy</a>&nbsp;to support his claim. It concluded &quot;25% of those polled agreed that violence against Americans here in the United States is justified as a part of the global jihad.&quot; But that non-profit is a bit controversial to begin with.&nbsp;</p><p><a href="https://www.americanprogress.org/issues/religion/report/2011/08/26/10165/fear-inc/" target="_blank">According to the Center for American Progress</a>&nbsp;it publishes &quot;a steady stream of reports mischaracterizing Islam and warnings about the dangers of Islam and American Muslims.&quot;</p><p><a href="https://www.centerforsecuritypolicy.org/2015/06/23/nationwide-poll-of-us-muslims-shows-thousands-support-shariah-jihad/" target="_blank">The CSP poll was conducted online</a>&nbsp;using a survey. But the questions they ask are somewhat confusing since it doesn&#39;t ask about personal feelings and could be asking how others justify jihad, for example.&nbsp;</p><p><a href="https://www.washingtonpost.com/news/the-fix/wp/2015/12/07/donald-trumps-call-to-ban-muslims-from-coming-to-the-u-s-has-a-very-bad-poll-at-its-center/" target="_blank">The Washington Post notes&nbsp;</a>the survey conducted by CSP is of U.S. Muslims, so it didn&#39;t even poll the people Trump hopes to stop from immigrating into the country.</p><p>CSP&#39;s founder and president, Frank Gaffney, is known for his conspiracy theory that a Hilary Clinton staffer is an agent of the Muslim Brotherhood.&nbsp;<a href="https://www.splcenter.org/fighting-hate/extremist-files/individual/frank-gaffney-jr" target="_blank">Southern Poverty Law Center</a>&nbsp;lists Gaffney as an anti-Muslim extremist. (Video<a href="https://www.youtube.com/watch?v=2WEz0TIoUtc" target="_blank">&nbsp;via Fox News</a>)</p><p>In 2008, Gaffney made headlines again after claiming President Obama hadn&#39;t provided a birth certificate.&nbsp;<a href="http://abcnews.go.com/Politics/donald-trumps-history-raising-birther-questions-president-obama/story?id=33861832" target="_blank">Trump has also questioned</a>&nbsp;the legitimacy of Obama&#39;s U.S. residency.</p>

A recent congressional subpoena for the records could reveal financial information about Trump to Democrats in Congress, but the President says a federal judge is moving too quickly.

On Monday, private attorneys representing Trump and his companies disagreed with a federal judge's decision to hold a comprehensive court hearing about the subpoena on Tuesday in Washington, according to court filings.

The President's attorneys say they are not being given a fair shot in court, and have asked the judge to either narrow the topics covered in the hearing Tuesday or cancel the hearing outright.

"Because the hearing is tomorrow, the court's consolidation will force plaintiffs to try their case on only four days' notice, with no discovery, with little opportunity to assemble evidence, before Defendants have filed a single pleading, with no idea which facts are actually in dispute, and without a round of briefing focused on the merits," the President's legal team wrote.

Congress' attorneys, however, said they are ready for the case to proceed as scheduled on Tuesday and do not want Tuesday's hearing to be canceled. The scheduled court hearing would be the first in a growing set of legal disputes between the Democratic-led House of Representatives and those it has subpoena for Trump's financial records.

So far, Trump has sued the accounting firm Mazars USA as well as two banks, Deutsche Bank and Capitol One, to stop them from fulfilling House subpoenas. Separately, the Treasury Department has pushed back against Congress' request for Trump's tax returns held by the IRS.

The accounting firm and banks haven't taken sides in the cases. Instead, the House general counsel is arguing opposite Trump to Judge Amit Mehta.

In this case, the Democratic-controlled House Oversight Committee initially subpoenaed Mazars for all financial statements, communications and other documents related to Trump, a handful of his companies and his foundation from 2011 through 2018.

Mazars became a target in the House investigation after former Trump personal attorney Michael Cohen accused Trump of fudging his wealth in an unsuccessful attempt to buy the Buffalo Bills football team and reduce his real estate tax burden.

The committee sought the accounting firm's information on Trump by April 29.

After Trump sued, Mehta temporarily halted the subpoena and was going to consider further questions about keeping the documents from Congress as the case progressed. But last Tuesday, Mehta said he was ready to hear the full arguments about the case in court, meaning his decision could come far earlier than previously expected.

The House has argued that it has the authority to subpoena Trump's information, and says it is investigating potential constitutional, conflict of interest and ethical questions related to Trump's financial holdings. "The Committee is determining what legislation is required to ensure full public confidence in the officials charged with executing the nation's laws," the House wrote in a filing earlier this month.

Trump's attorneys, conversely, say the President is being targeted by the Democrats for political reasons--that the subpoena doesn't have a legislative purpose. They also argue Trump will be harmed if his private information from his accountant is exposed.

The House Financial Services and Intelligence committees are also investigating the President's finances and have delivered subpoenas to Deutsche Bank, Capitol One and other major banks.

Trump, his businesses, and three of his children -- Ivanka, Donald Jr. and Eric -- are suing in New York federal court to stop the subpoenas to those banks and won't be heard by a judge until next week.