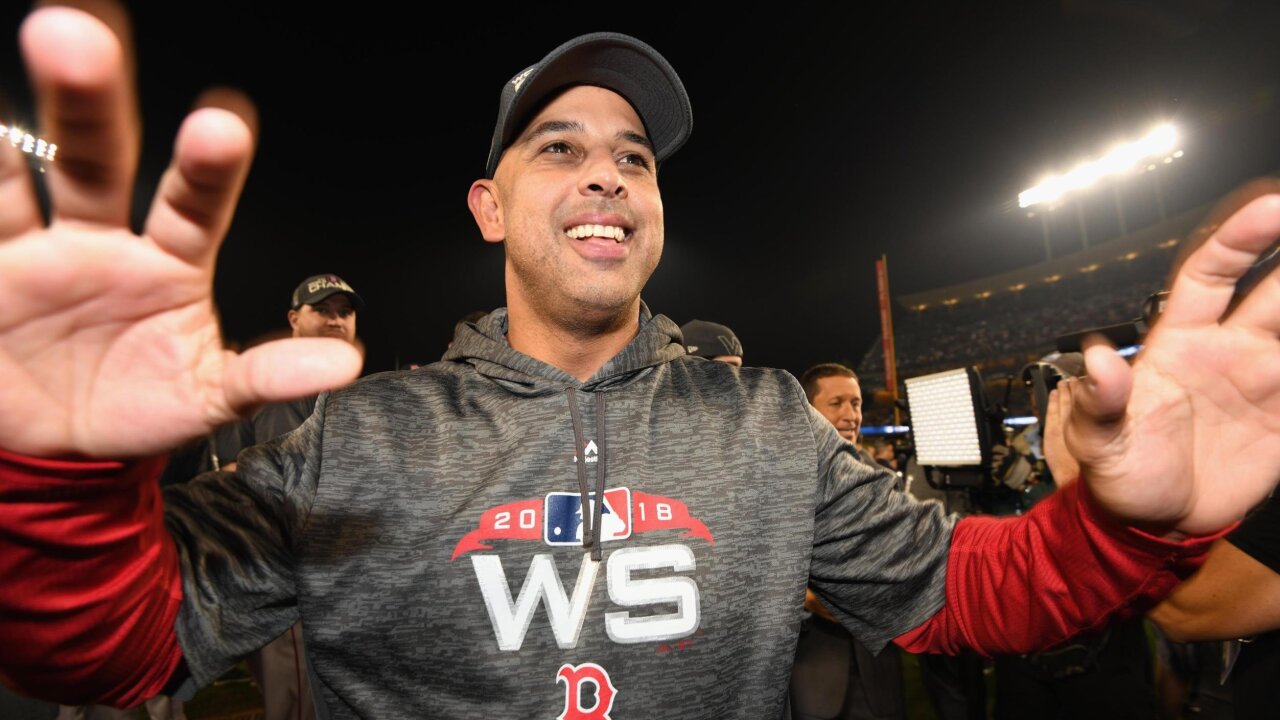 The Boston Red Sox visit to the White House on Thursday highlighted President Donald Trump's complicated history with professional athletes of color , as the world championship baseball team's attendance broke down along racial and ethnic lines.

To start, the manager Alex Cora, who is Puerto Rican, decided to skip. Others who declined the invitation included 2018 American League Most Valuable Player Mookie Betts, star pitcher David Price, Jackie Bradley Jr., Rafael Devers, Hector Velazquez, Xander Bogaerts, Sandy Leon and Christian Vazquez, according to the Boston Globe . They are all players of color.

"Alex Cora has confirmed newspaper report he will not make the trip to meet the president. So basically it's the white Sox who'll be going," Boston sports columnist Steve Buckley tweeted earlier this week.

Price retweeted it, adding that more than Buckley's 38,000 followers "should see this tweet."

Price said: "It was an insensitive tweet that needs to be seen by more people. That's what it was," according to the Boston Globe .

On Thursday afternoon, Trump met with team leadership, followed by a ceremony with members of the Red Sox on the South Lawn of the White House. He called the team a "very special group of people" and mentioned that EPA Administrator Andrew Wheeler and Sen. Tom Cotton were both fans in attendance.

Members of the team had just come from Walter Reed National Military Medical Center where they visited with wounded soldiers, the President said.

Trump said he loves baseball, and called it a "special game, a special sport," which he played himself in high school.

He also offered the players a tour of the Lincoln bedroom.

The split-attendance on Thursday only underscores the President's fraught history with champion athletes.

Some have publicly shared their reasons for declining the invitation, some have not.

Trump has long been a racial lightning rod, from his tepid response to the violence of white nationalists to his stark anti-immigrant rhetoric throughout his time in office and campaigning.

Earlier this week, he welcomed golfer Tiger Woods to the White House to bestow him with the Medal of Freedom. Woods and Trump have a long history together , both professionally and personally.

But he has frequently railed against African-American NFL players who have protested police brutality by kneeling during the National Anthem. Players have said the protests, which began in 2016, are intended to draw attention to what they see as systemic bias against people of color.

Other professional athletes have skipped out on invitations by Trump to visit the White House to celebrate recent wins, including the Washington Capitals' Braden Holtby following the team's 2018 Stanley Cup win and the White House canceled the Philadelphia Eagles' visit after the Super Bowl in 2018 when it became clear only a small number of players were going to attend. And the 2018 NBA champion Golden State Warriors spent time with former President Barack Obama during their trip to Washington instead of a White House visit this year. In September 2017, several months after the team won the 2017 NBA championship, Trump rescinded his invitation to the team to visit the White House in honor of their win. The decision came after Stephen "Steph" Curry, the team's superstar player, publicly criticized Trump's attacks on black athletes protesting police brutality during the National Anthem.

For Cora, a Caguas, Puerto Rico, native, it's the administration's widely-criticized response to the devastation caused by Hurricane Maria, which left nearly 3,000 people dead in 2017. Cora said he did not "feel comfortable" celebrating at the White House.

"Unfortunately, we are still struggling, still fighting. Some people still lack basic necessities, others remain without electricity and many homes and schools are in pretty bad shape almost a year and a half after Hurricane Maria struck," Cora told Puerto Rican Spanish-language newspaper El Nuevo Día .

"Even though the United States Government has helped, there's still a long road ahead and that is OUR reality. I've used my voice on many occasions so that Puerto Ricans are not forgotten and my absence (from the White House) is no different. As such, at this moment, I don't feel comfortable celebrating in the White House," Cora said.

Cora revealed last year that during contract negotiations with the Red Sox in 2017, he requested as part of his deal a plane full of supplies to help people that were struggling in the wake of the storm. In January 2018, he traveled to his hometown with several Boston personalities to personally deliver the supplies, which included diapers, batteries, funds and new baseball equipment for the neighborhood children.

Cora appeared to capture the President's attention -- without responding to him directly, Trump defended his Puerto Rico response in a Monday tweet , citing misleading statistics about aid.

"Puerto Rico, just so you understand, we gave Puerto Rico $91 million," Trump said, adding that that was the "largest amount of money given to any state" for disaster relief.

More than half of that $91 billion is based on the White House's estimates for costs FEMA could incur in years to come.

The aid totals $41 billion in announced funding from multiple agencies, which has mostly not been spent yet, according to The Washington Post .

The additional $50 billion, administration officials told the Post, "(refers) to an internal Office of Management and Budget estimate of the potential liabilities over the life of the disaster that would need to be committed under the Robert T. Stafford Disaster Relief and Emergency Assistance Act of 1988. The estimate was described as a high-end estimate subject to change year by year."