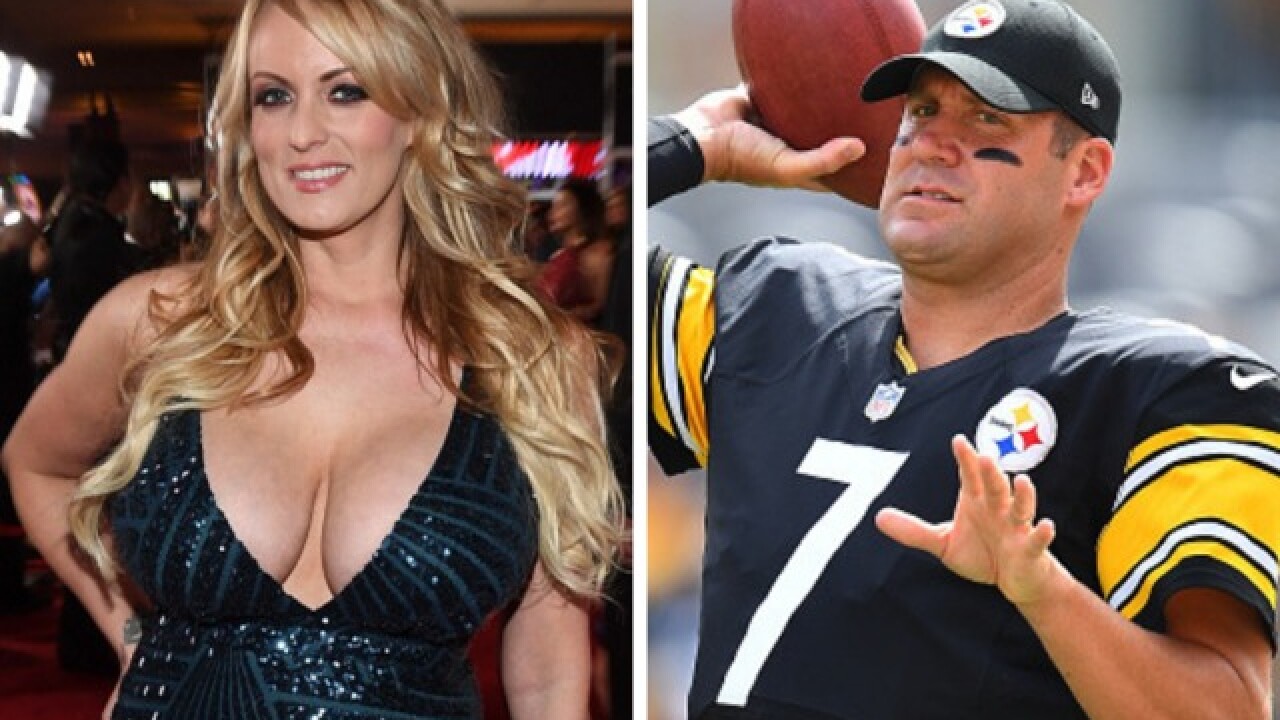 Image copyright 2018 Getty Images. All rights reserved. This material may not be published, broadcast, rewritten, or redistributed.
<p>Stormy Daniels and Ben Roethlisberger.</p>

Stormy Daniels, in her new tell-all book, says she was "terrified" by Pittsburgh Steelers quarterback Ben Roethlisberger after Donald Trump introduced the two at a nightclub in 2006.

CNN has an exclusive copy of "Full Disclosure," the book where Daniels details what she says was a one-time sexual encounter with Trump. The next night, Daniels says, she went to a nightclub where she was ushered into the VIP section to a couch where Trump and Roethlisberger were talking, and Trump eventually suggested the quarterback walk Daniels back to her hotel room.

"Trump was sitting in a corner with Ben Roethlisberger. Shortly before his twenty-fourth birthday," she writes in previously unpublished excerpts. "They were in mid-conversation, but Trump stopped and smiled at me. He made a kissy face like an invitation, and I just nodded."

She says she sat next to Roethlisberger and chatted with him about winning the Super Bowl, telling him that she was in Detroit when his team won. She mentioned the strip club where she'd performed, and Roethlisberger acknowledged that the club was "really nice."

Roethlisberger eventually asked, "Do you come to Pittsburgh a lot?" Daniels wrote, before the two exchanged phone numbers.

"'Is this your real number or your ho phone?' I asked as I typed. Trump and Ben both laughed, and Ben recited a second number. 'I'm not gonna call you on your ho phone.'

"Trump grabbed Ben's shoulder and leaned in. 'I told you she was smart,' he said. 'What did I tell you about this one?'"

Daniels says she wondered what Trump had told Roethlisberger. At the end of the night, Daniels writes that Trump suggested it wasn't a good idea for Daniels to walk back to her hotel room alone. She agreed, but thought it was strange that instead of sending one of their bodyguards Trump offered Roethlisberger up to walk her to her room.

At the hotel room, Roethlisberger asked if he could enter, Daniels writes.

"'I'm really tired,' I said, awkwardly holding the key card. He looked at the card until I put it in, and I didn't open the door all the way. Just enough for me to slip through. As I got behind it, keeping my face out, I noticed he'd raised his hand to rest it on the door.

"'How about a good night kiss?'

"'Well, no, I am here with your friend,' I said, literally trying to play the Trump card.

She writes she suddenly increased the pressure enough to slam the door.

"'He stood outside, not leaving,'" Daniels said of Roethlisberger. "Every now and again he'd knock, rapping his knuckles in a line low along the door. 'Come onnnn,' he repeated in a singsong voice. 'I won't tell.'"

Daniels said she was shaken by the experience.

"I was terrified. I am rarely terrified," she writes.

CNN has repeatedly reached out this week to Roethlisberger's agent Ryan Tollner for comment. CNN first published details of Daniels' account of meeting Roethlisberger from her book on Tuesday.

Tollner has acknowledged he has received CNN's messages and would respond, but has not done so as of press time.

Trump has never admitted there was a sexual encounter with Daniels, but his attorneys did admit to approving a $130,000 payment to Daniels to ensure her silence. The White House did not respond to questions about Daniels' account with Roethlisberger.

On the campaign trail in 2016, Trump touted his friendship with Roethlisberger during campaign rallies in Pennsylvania.

Her attorney Michael Avenatti said, "Stormy stands behind her comments in the book. If it wasn't true she would not have stated it."

In January 2018 InTouch Magazine published an interview with Stormy Daniels and Roethlisberger was mentioned as walking her to her room. She didn't mention the other details that made her afraid or Trump's role. Tollner responded to the InTouch article January, telling CNN that Roethlisberger had "seen and been aware of the passage for quite a while now, and Ben has no intention of addressing this story in any way."

Roethlisberger has been investigated for sexual assault at least twice, both of which he has denied.

One of those times was at a 2008 celebrity golf tournament in Lake Tahoe. A civil case was filed by the alleged victim, an executive casino host at Harrah's Lake Tahoe, in Washoe County, Nevada, alleging that Roethlisberger sexually assaulted her. The case was later settled.

Roethlisberger denied raping the woman. After the civil settlement, Roethlisberger and his lawyer declined to comment. The terms of the settlement have not been made public.

"I would never, ever force myself on a woman," he said in 2009 when the story became public.

In 2010, police were called when a woman in Georgia accused Roethlisberger of raping her.

Roethlisberger denied the allegations and prosecutors declined to file charges. Roethlisberger was suspended by the NFL for six games. NFL Commissioner Roger Goodell told the quarterback the suspension was "the best step for your personal and professional welfare." The suspension was later cut to four games.