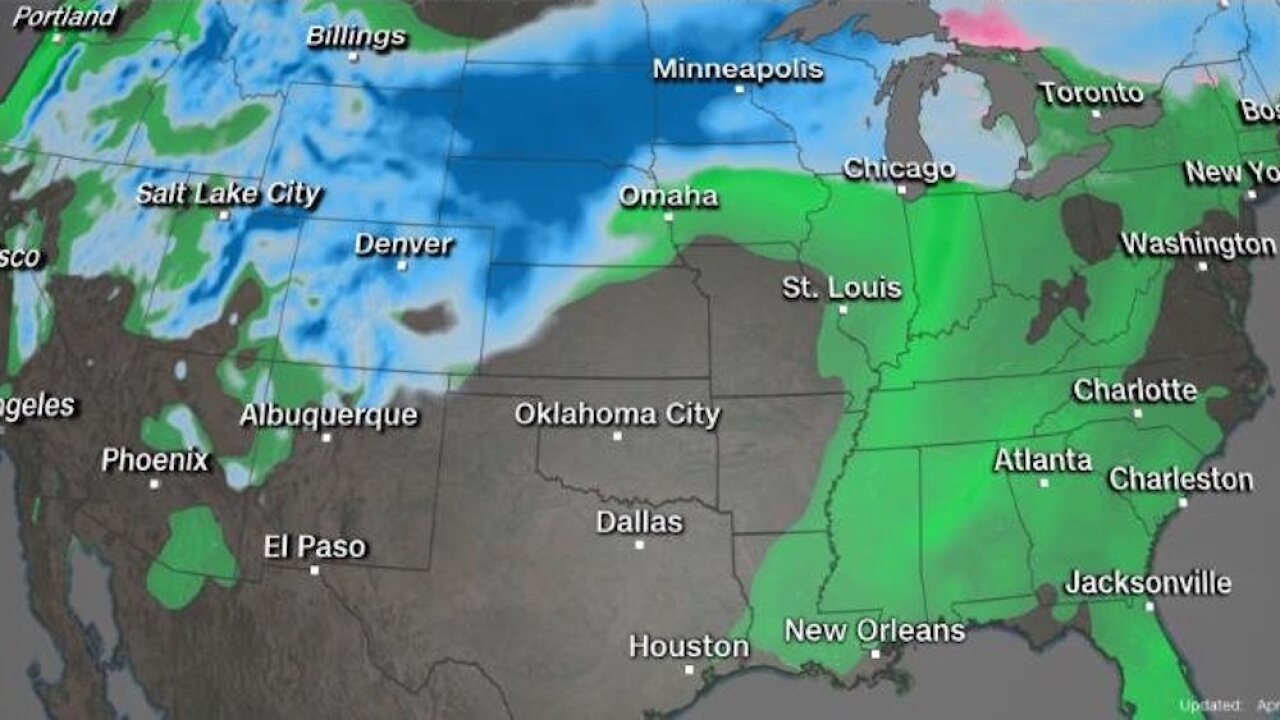 A major spring storm unloaded heavy snow and blizzard conditions from the Dakotas to Minnesota, and is expected to make travel a nightmare for the 1.6 million people in its path as it makes its way toward Canada.

Storm warnings and blizzard conditions extended to at least 12 states, the National Weather Service said. Officials urged drivers to be cautious, with states such as South Dakota warning people in some counties to stay off the roads completely.

"Really hope this is the last snow storm we'll have to post about this spring, the National Weather Service tweeted. "But ... it's worth repeating. Stay safe out there!"

Meteorologist Michael Guy said metro Denver is now out of the warning area. The heaviest snow will hit north central Nebraska, central and southeast South Dakota and Minnesota, including metro Minneapolis, as the storm system continues its track toward northeast into Canada.

The Plains could get more than 2 feet of snow by Friday morning, and South Dakota is bracing for a possible 30 inches.

Forecasters had expected the extreme weather to be a bomb cyclone Wednesday as the storm whipped the Rockies and Plains and delivered a temperature shock to a region enjoying springlike conditions.

Heavy snow dropped in parts of South Dakota on Wednesday, and soon began slamming other states, including Wyoming, Colorado and Minnesota.

But while the storm did not bomb out by definition, Guy said, it was still extremely powerful and produced wind gusts in excess of hurricane strength. The highest wind gust reported was in Pueblo, Colorado, at 107 mph — the equivalent of sustained winds in a Category 2 hurricane, he added.

A bomb cyclone is a rapidly strengthening storm that reaches certain criteria in 24 hours. Four weeks ago, a similarly powerful system dumped heavy snow and rain on some of the same regions, leaving hundreds of millions of dollars in livestock and crop damage in Nebraska alone , largely through flooding.

Stay off the roads, drivers warned

In some states, getting from one point to another will be a nightmare.

The National Weather Service office in Nebraska said travel will be almost impossible until Friday morning, using language nearly mirrored by offices throughout the region.

In South Dakota, the sheriff's departments of Deuel and Hamlin counties asked people to refrain from driving through Thursday as the blizzard shut down parts of interstates.

"Roads are becoming impassable. Unless you are experiencing an emergency, please stay off the roads," the National Weather Service said.

Just this week, Denver was basking in springlike conditions with 78 degrees Tuesday, a near-record high for that date. By Wednesday, temperatures were in the mid- to upper 30s.

The Minneapolis/St. Paul area may be spared blizzard conditions but still could see up to 5 inches of snow. Minneapolis schools will make a decision Thursday morning on whether schools will be open.

The snowfall could lead to additional flooding in the region.

In South Dakota and western Minnesota, rivers will see moderate to major flooding as additional snow will slow the rate at which waters recede.

The Red River is experiencing significant flooding because of melting snow, with this new storm likely prolonging the high water.

A warmer section of the storm, meanwhile, could bring strong rain and other severe conditions -- including damaging winds, large hail and tornadoes -- to parts of Nebraska, Kansas and Iowa.

Frontier and United airlines will allow passengers scheduled to travel Wednesday or Thursday within the Plains area to change their tickets at no charge.

Frontier said customers whose flights are canceled may request a refund. Delta said it will waive any applicable fees for travelers who want to change their flights. "In the event your selected flight is canceled by Delta, we will contact you with additional information," the airline said in a statement.

Southwest said some flights may be disrupted until Thursday and urged travelers to check their flight status and explore their options on its website.