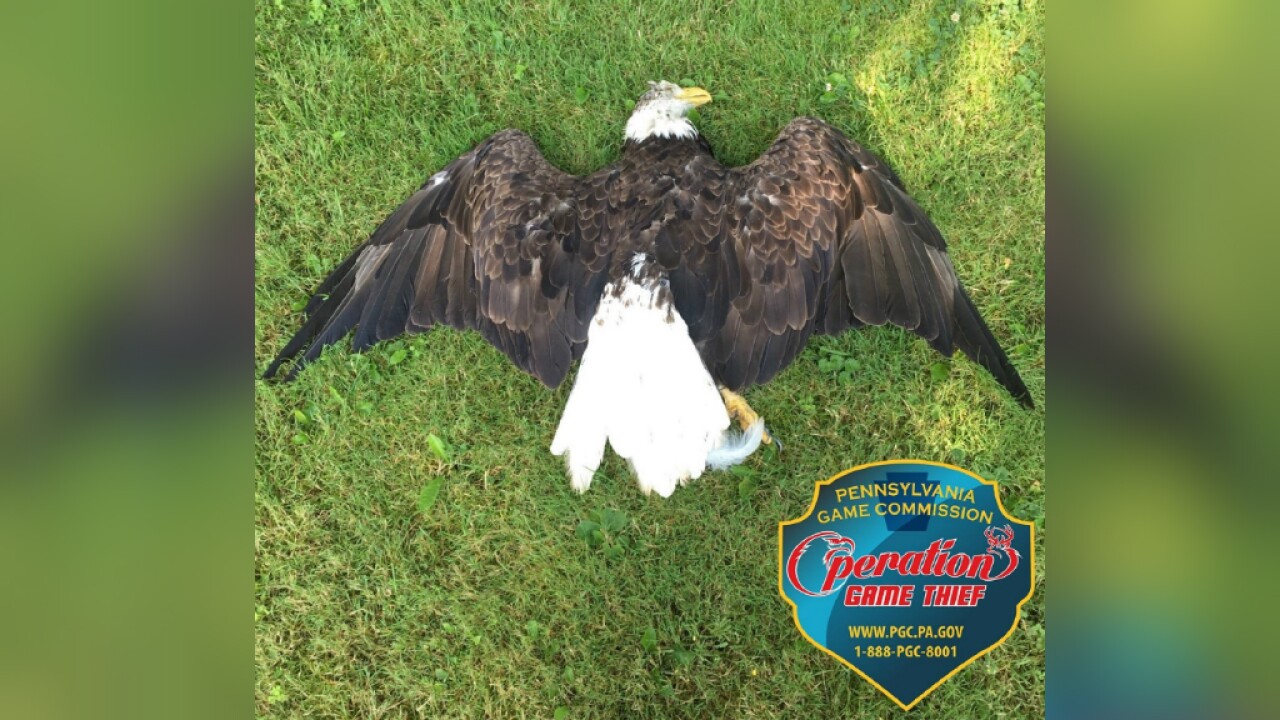 The person who killed a bald eagle in Pennsylvania could be facing hefty fines and possible jail time.

A state game warden responded to a scene in Erie County Thursday night, near the border with Ohio, and found that the bird had been shot, according to a Facebook post by the Pennsylvania Game Commission.

It was located near Hope Cemetery in Elk Creek Township, according to the post.

The bald eagle was removed from the US Endangered Species list in 2007, but they're still protected under three federal acts : the Lacy Act, the Migratory Bird Treaty Act and the Bald and Golden Eagle Protection Act, along with state and municipal laws.

Killing, selling or possessing a bald eagle without a permit can carry fines of up to hundreds of thousands of dollars and up to two years in prison.

The Pennsylvania Game Commission explains that despite the bird's status as a national symbol, it's still one of the most persecuted in the country.

"Early publications accused bald eagles of preying upon game and farm animals and they were routinely shot on sight," the commission says.

But the main reason the bird ever ended up on the endangered list is because of the pesticide DDT , which caused the bald eagle population to plummet in the first half of the twentieth century.

The chemical made its way into the birds' diet through the fish they prey upon.

"It accumulated in eagles and caused their eggs to be too thin to withstand the eagle's weight during incubation," the commission explains.

Finally, in 1972, the use of DDT and other harmful pesticides that bio-accumulated in birds were banned, and clean water regulation and heightened environmental awareness helped the fish populations, and eagles were once again able to thrive, Pennsylvania officials say.

Today, the birds are still vulnerable, not only to gunshot wounds but to cars, power lines and poisons, according to Crystal Slusher with the American Eagle Foundation , who spoke with CNN.

For instance, hunters will use lead shots and then gut their animal out in the woods, Slusher explained. A scavenger, like a raccoon, might come along and eat the lead-contaminated flesh, and the lead enters the food chain.

Another threat is rodenticides, or rat poison. The intended victim will eat the poison and go off and die, and then animals such as owls, falcons and other birds of prey will consume them, Slusher said.

As for the bald eagle shot in Pennsylvania last week, Slusher said she still doesn't understand why someone would want to shoot a national bird.

"It's a prominent symbol of the United States, and laws were passed to protect it," she said. "It once faced an inevitable destruction, and seeing it being shot for no reason doesn't make sense," Slusher told CNN.

The Pennsylvania Game Commission is asking anyone with information on the Erie County killing to call its Northwest Region Office at 814-432-3187 or the Operation Game Thief Hotline at 1-888-PGC-8001.