Newsrooms beef up security amid a week of threats 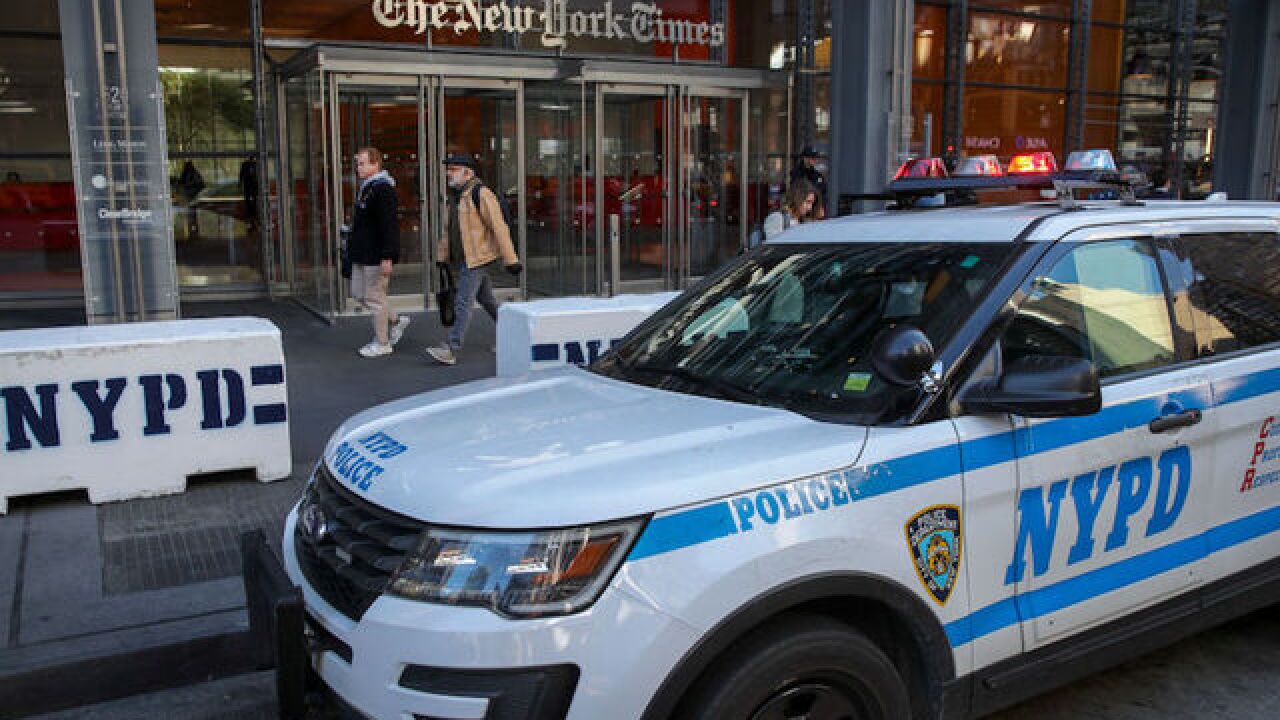 This week's mail bombs have spurred another reexamination of security practices at CNN and other major newsrooms.

Even after Friday's arrest of a suspect in the bombing spree, journalists have been urged to stay vigilant and take threats seriously.

Two of the packages found so far were sent to CNN's New York offices at Time Warner Center. Wednesday's package, addressed to former CIA director John Brennan, who actually works for NBC, arrived in the mailroom and forced an evacuation of the building.

Friday's package, addressed to CNN contributor James Clapper, the former director of National Intelligence, was intercepted at a nearby post office.

All mail destined for CNN's US offices is now being screened first at off-site facilities.

This means the package to Clapper "would NOT have come directly to the TWC, even if it hadn't been intercepted first," CNN Worldwide president Jeff Zucker said in a Friday morning memo.

Zucker held an informal town hall for New York employees on Thursday to share security updates and answer questions. When he thanked the company's security team, there was a long round of applause. "Thank you for an incredible job," Zucker said to the security personnel.

Officials at other major media companies have been on a heightened state of alert.

The security department at News Corp, which owns the Wall Street Journal and other newspapers, told staffers on Wednesday, "We are treating this situation with extra vigilance."

There were scares at the Los Angeles Times and the San Diego Union-Tribune that day.

But to date the only other media company that has received a mail bomb is Tribeca Enterprises, the home to Robert De Niro's production company in Lower Manhattan.

Some of the security adjustments have been visible: Magnetometers have been installed at the entrances of the CNN Center in Atlanta, which is partially open to the public.

But some of the efforts are purposefully hard to spot. And media companies generally try to say as little as possible about security.

"Ensuring the safety and security of our staff is of critical importance and we've taken steps to expand security measures given the current environment, but as a matter of policy, we won't discuss this in any more detail," The New York Times said in a statement.

At the newspaper's headquarters, the NYPD recently installed concrete blocks along the sidewalk, a move that appears to be designed to protect the building from a vehicular attack.

News executives and their security offices have decades of experience with belligerent customers, unstable viewers, and menacing readers who send threatening letters or show up at offices.

Acts of violence are rare, though not unprecedented. Acts of harassment, stalking and violent threats are more common. Security staffs sometimes work with local and federal law enforcement on these cases.

CNN on Friday publicly thanked the FBI, the Department of Justice, the NYPD, the Bureau of Alcohol, Tobacco, Firearms and Explosives and the United States Postal Service for their "incredible work" in a tweet, underscoring the coordination it takes to defuse these kinds of dangers.

Journalism advocacy groups say that these problems are on the rise, partly due to a steady stream of anti-media attacks by political leaders.

In August, for example, a California man was arrested for allegedly calling the Boston Globe and threatening to kill employees. The paper had recently led a nationwide editorial-writing effort decrying President Trump's "enemy of the people" rhetoric. The man, who has pleaded not guilty, allegedly used that term in his phone calls.

In some cases, violence against newsrooms has nothing to do with politics. The shooting spree at the Capital Gazette newspaper in Annapolis, Maryland on in June, which left five employees dead, happened after the suspect had a long-running feud with the paper.

On Monday, a man tried to break into the offices of WTTG, the Fox-owned local station in Washington.

The intruder kicked down the glass doors in the lobby and tried to enter further into the building. He was shot once in the chest by a security guard.

The man was later hospitalized, and no one at the station was injured.

The suspect "was known to both Fox executives and police, according to sources, and had leveled threats against both previously," according to WTTG's own story about the incident. It said that the man "has previously sent emails to employees of FOX 5" and "is suspected to have mental health issues."

Every time there's a newsroom evacuation or worse, journalists react the same way: by covering the story thoroughly.

WTTG began live coverage of the break-in right away. CNN used the Skype app and cell phone connections to broadcast live during the evacuation. And the survivors of the The Capital Gazette set up a temporary newsroom after the attack there.

"This is a scary time," New York Times publisher A.G. Sulzberger said at a business journalism gala in New York on Thursday night.

He was interviewed on stage by Kara Swisher, who asked him about his fears. Sulzberger responded by pointing out that reporters operate in war zones and other locales that are far more perilous than the streets of New York City.

CNN's Anderson Cooper made a similar point on Wednesday night, when he was broadcasting live from outside Time Warner Center.