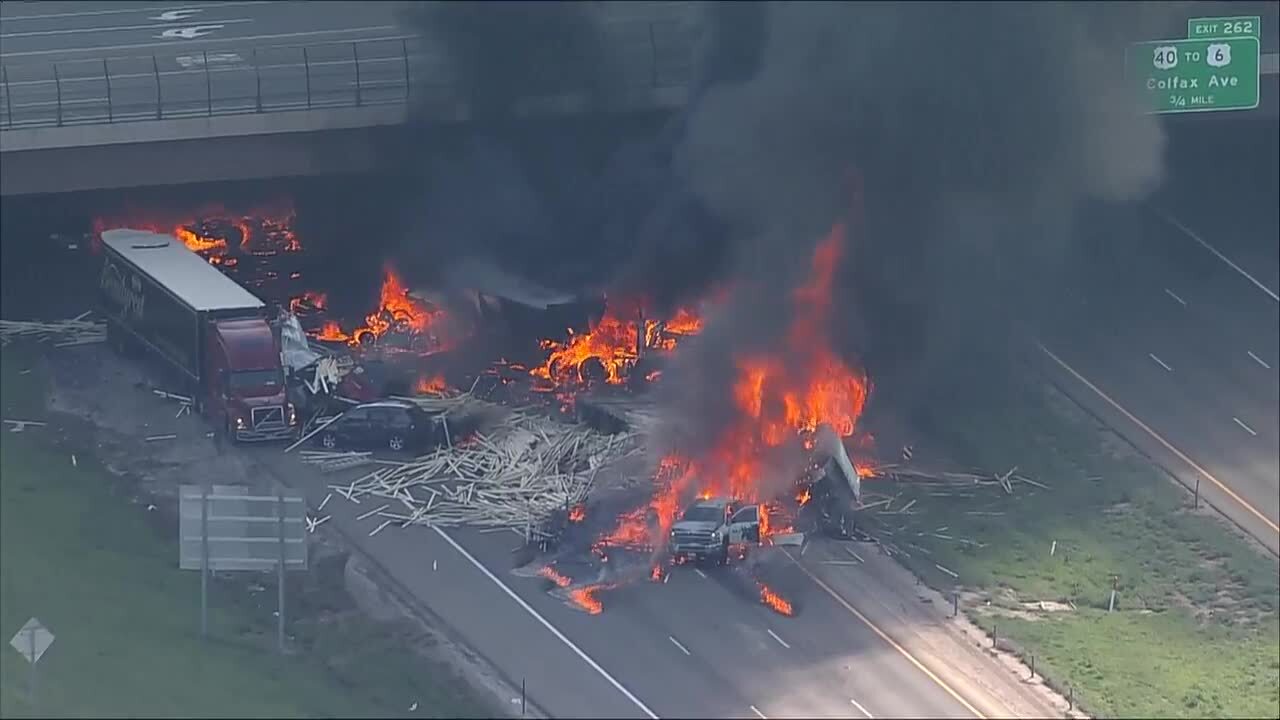 DENVER, Colorado — Police confirmed multiple people have died following an afternoon fiery crash involving approximately 11 vehicles and four semis on the eastbound lanes of Interstate 70 near Colorado Mills Parkway, as nearly a dozen others were being treated for injuries, a spokesperson for the Lakewood Police Department said during a news conference Thursday evening.

Speaking to local media, Lakewood police spokesman Ty Countryman also said I-70 would be closed in both directions overnight as firefighters continue to work on hotspots from the crash. CDOT officials advised drivers to avoid the area altogether on Friday as extended closures could happen in that stretch of the highway into the morning rush hour commute.

In a tweet following the news conference, CDOT said travelers could use the detour at the Denver West off-ramp on westbound I-70.

Colorado State Patrol warned eastbound lanes of the interstate would be closed through the Friday morning rush hour.

An investigation into the crash was still pending, Countryman said, given the number of vehicles involved and the magnitude and size of the crash, which he called "one of the worst accidents" the department has had in the city of Lakewood.

Authorities are expected to provide another update on the status of I-70 at 7 a.m. Friday.

Clean up and Investigation continues on I-70 and Colorado Mills after a multi vehicle accident with fatalities and injuries. This is the scene almost 12 hours later. @DenverChannel pic.twitter.com/2oZClEXNsi

Police said an out of control tractor trailer in the eastbound lanes of I-70 careened into stopped traffic at the Denver West Colorado Mills Parkway overpass. Traffic had been backed up due to a previous crash involving a jackknifed semi and a school bus about a mile ahead.

During the Thursday night news conference, Countryman said no charges had yet been field for the driver responsible in multi-vehicle crash, adding it would take some time for the investigation to move forward as police had to conduct countless more interviews in order to piece everything together.

West Metro Fire crews said they treated at least two people, among them one of their firefighters, who was hit by debris when an explosion occurred. Officials from the department said the firefighter suffered minor injuries.

A total of seven people were taken to hospitals for treatment - six civilians and the firefighter - and multiple others were treated and released at the scene, according to West Metro Fire Rescue spokeswoman Ronda Scholting.

The driver of the 18-wheeler that lost control survived the collision and was among those hospitalized, police said.

Lakewood police, who was also assisting in the crash, told Denver7 that at least one person was burned but is still alive.

Countryman said late Thursday they were still trying to place people with vehicles that lay scattered and charred along the highway. They said there have been no reports of anyone missing at this time.

Witnesses say they heard several explosions as fire crews worked to get the blaze fueled by tossed lumber and diesel fuel under control. Josh McCutchen, a YouTube vlogger, was streaming live video from his van on eastbound I-70 when the out of control semi passed him on the shoulder. His video continues, showing the aftermath of the collision.

Extended closures on I-70 for Friday morning

The Colorado Department of Transportation closed both directions of the interstate and traffic was being diverted onto Colfax and 6th Avenue to allow fire crews to put out hotspots before they could get in to assess damage to the road and the overpass.

Tamara Rollison, a spokeswoman for CDOT, said extended closures on I-70 could happen well into the morning so that bridge inspectors can take a closer look at the damage created by the blaze.

"It could take a while to get those repairs done," Rollinson said during the Thursday night news conference.

The Friday morning commute will be slow-going, she warned. Rollison said drivers should check the cotrip.org website for the latest road conditions as well as suggested detours.

Police said they are investigating what caused the truck driver to lose control of his rig.

Watch the Thursday night conference below: