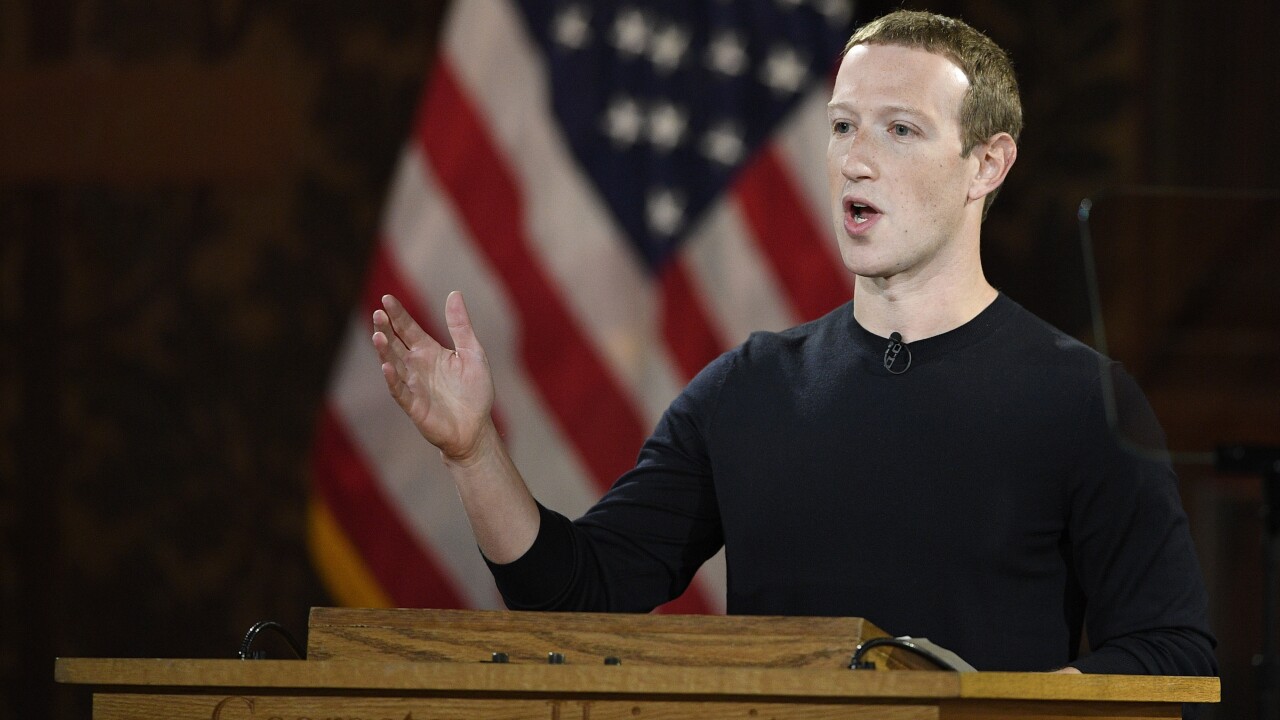 Facebook CEO Mark Zuckerberg sought to recast the challenges facing his company in a historical light on Thursday, describing social media as a kind of "Fifth Estate" and describing politicians' calls to clamp down on tech companies as an effort to restrict the freedom of expression.

In a speech citing landmark Supreme Court cases and historical figures such as Frederick Douglass, Zuckerberg told an audience at Georgetown University that during times of social upheaval, policymakers have instinctively sought to limit the freedom of speech.

Zuckerberg had said in a Facebook post Wednesday that the speech would reflect his lengthy, "unfiltered" views on threats to free speech worldwide and the speech-related problems that the internet has created.

During the speech, Zuckerberg pushed back on criticism of Facebook's handling of political advertising, saying even if Facebook eliminated political ads from its platform, other types of ads could come under scrutiny as well, and it would be difficult to draw a line.

"I don't think most people want to live in a world where you can only post things that tech companies judge to be 100 percent true," Zuckerberg said.

Zuckerberg went on to discuss how tech companies — including his — pose a potential threat to freedom of expression, and returned to a familiar argument: That independent bodies should be responsible for developing rules and norms surrounding content.

He then pivoted to argue for his company's forthcoming oversight board.

Zuckerberg also reiterated another claim: That efforts to restrict US tech companies could lead to unintended consequences such as allowing Chinese competitors to dictate the terms of speech and innovation.

"If another nation's platforms set the rules, our nation's discourse could be set by a completely different set of values," he said. "We should be proactive and write policies that help free expression triumph around the world."

The entrepreneur said his concerns about freedom of expression extend beyond the United States.

"Increasingly, we're seeing countries try to impose their speech restrictions beyond their country," Zuckerberg said during a question-and-answer session with students. He slammed a recent ruling by the European Court of Justice holding that Facebook can be required to delete content worldwide that is considered illegal in individual European countries.

"This is incredibly problematic and troubling," Zuckerberg added, saying there will undoubtedly be future litigation that Facebook will participate in seeking to establish how that ruling should be implemented.

Faced with two questions — one about allegations of Facebook's bias against conservatives and one about Facebook's outreach to conservatives — Zuckerberg quipped, to laughter: "I think it would be hard to be biased against both sides."

In recent weeks, Facebook has found itself at the center of a debate about truthfulness in political ads. The company is under fire for allowing politicians to lie in their campaign advertisements on the platform.

Facebook and many legal experts have defended the company's right not to censor political candidates, but some critics including Sen. Elizabeth Warren have slammed the company for running what Warren termed a "disinformation-for-profit machine."

Despite the companies' efforts, concerns about the tech industry's handling of offensive speech and disinformation have continued to mount as the 2020 election cycle gets underway.

Facebook has launched a civil rights task force to monitor for election and census interference, and Google has hired some 10,000 employees worldwide to tackle content moderation.

But skeptics say the companies have dragged their feet for too long. At a congressional hearing Wednesday, Oregon Republican Rep. Greg Walden said social media companies have been too "slow to clean up" their platforms while too quick to claim legal immunity for content under a law known as Section 230 of the Communications Decency Act.

"Many of our concerns can be readily addressed if companies just enforce their terms of service," said Walden.