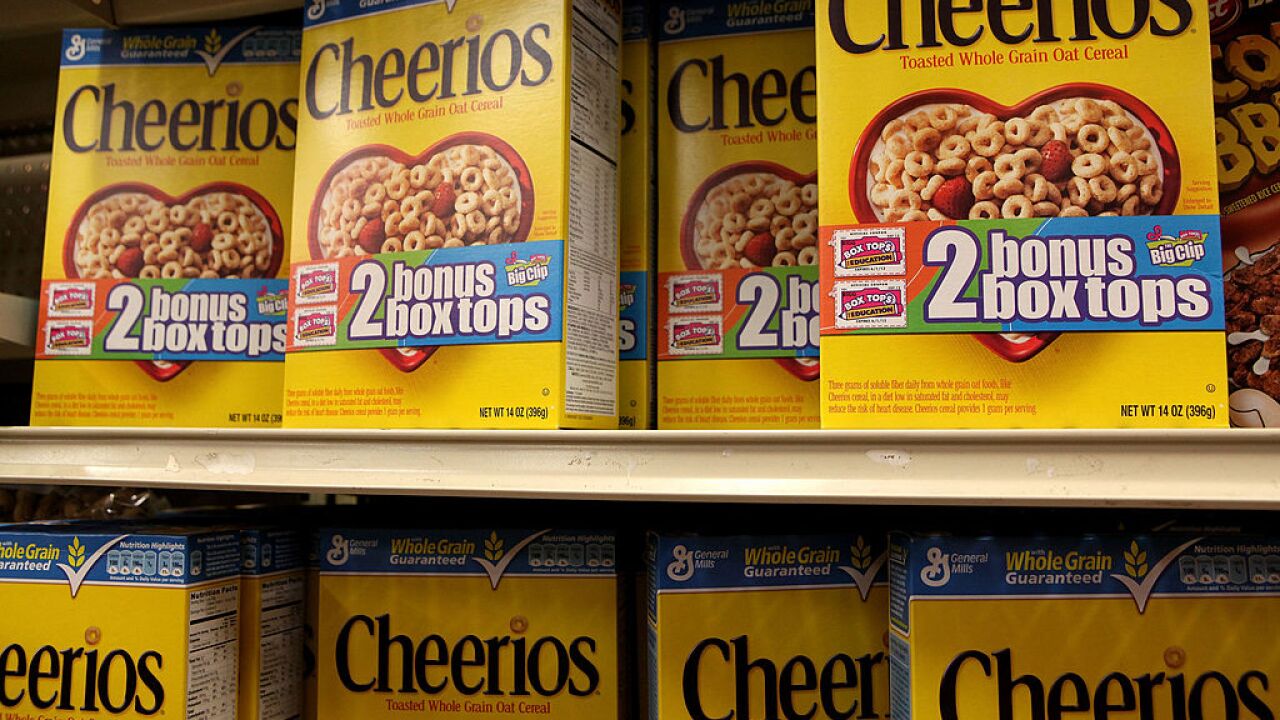 Several popular breakfast foods, including Cheerios and Nature Valley products, continue to test positive for trace amounts of a controversial herbicide that may increase the risk of cancer, according to a report released Wednesday by an environmental advocacy group.

The Environmental Working Group, which has links to the organics industry, found that all 21 of the products it tested had levels of glyphosate that were "higher than what EWG scientists consider protective for children's health."

Manufacturers maintain that their foods are safe, and the findings aren't unprecedented: The group also found in October that most of the breakfast cereals it tested contained glyphosate, the main ingredient in the weed killer Roundup.

A federal jury unanimously determined in March that Roundup was a "substantial factor" in causing a California man's cancer. And last month, California jurors ordered the manufacturer, Monsanto, to pay over $2 billion to a couple who said long-term exposure to the product caused their cancers.

The latter verdict is being appealed, but about 11,000 similar cases are pending in state and federal courts.

A spokeswoman for the company's crop science subsidiary, Charla Lord, said that an "extensive body of science" and "the conclusions of regulators around the world" show that "glyphosate-based products are safe when used as directed."

General Mills, which manufactures all of the products tested in the EWG report, said in a statement that its "top priority is food safety."

The company noted that "most crops grown in fields use some form of pesticides and trace amounts are found in the majority of food we all eat" but said it was working to "minimize the use of pesticides on the ingredients we use in our foods."

General Mills did not directly respond when asked why it is reducing pesticide use when it already considers its products to be safe.

How much glyphosate is too much?

An analysis published in February found that glyphosate can increase cancer risk by up to 41%, although the researchers focused on those with the "highest exposure" to the chemical, like groundskeepers, who are exposed to more glyphosate than people may consume through snacks.

The herbicide can make its way into processed foods after being used on farms that grow oats, but none of the levels found in any food products in the new report exceeded the Environmental Protection Agency's legal limits.

"It is not surprising that very low levels of pesticides, including glyphosate, are found in foodstuff," said Dr. Paolo Boffetta, associate director for population sciences at Mount Sinai's Tisch Cancer Institute. "In general, these levels are unlikely to cause health effects in consumers."

Still, "it is important that people know whether there is glyphosate or other chemicals in their food, even at very low levels," said Boffetta, who was not involved in the reports or the analysis.

General Mills emphasized in its statement that it followed "strict rules" set by "experts at the [Food and Drug Administration] and EPA." Bayer's Lord said "the reality is that regulatory authorities have strict rules when it comes to pesticide residues, and the levels in this report are far below the established safety standards."

The Environmental Working Group, however, uses a far more conservative health benchmark that includes an added buffer for children, as "exposure during early life can have more significant effects on development later in life," said Dr. Alexis Temkin, an EWG scientist who co-authored both reports and spoke to CNN last year.

Manufacturers dispute that threshold. In an October statement, General Mills said that "the extremely low levels of pesticide residue cited in recent news reports is a tiny fraction of the amount the government allows."

The EPA said in April that the proper use of glyphosate poses "no risks to public health" and that the chemical "is not a carcinogen," a cancer-causing chemical. But a World Health Organization agency, the International Agency for Research on Cancer, determined in 2015 that glyphosate is "probably carcinogenic to humans."

A separate WHO panel assessing pesticide residues said in 2016 that "glyphosate is unlikely to pose a carcinogenic risk to humans from exposure through the diet," adding to a dizzying array of contradictory findings, but the International Agency for Research on Cancer has vigorously defended its conclusion.

The agency wrote in 2018 that it "has been subject to unprecedented, coordinated efforts to undermine the evaluation, the program and the organization." Those attacks, it said, "have largely originated from the agro-chemical industry and associated media outlets."

A war of words

A 2017 CNN investigation of internal emails from Monsanto appeared to show company executives attempting to discredit the International Agency for Research on Cancer report before it was even released.

One executive's email, titled "RE: IARC planning," suggested that the company ghostwrite parts of a 2015 study in which experts rejected the agency's finding that glyphosate could cause cancer. A Monsanto spokeswoman told CNN at the time that the study was not ghostwritten and was "the work of the glyphosate expert panel."

Although the EPA has maintained that glyphosate is safe, CNN's investigation also raised questions about industry influence at the federal agency.

A Monsanto executive wrote in a 2015 internal company email , for example, that an EPA official offered to help quash another agency review of glyphosate, saying, "If I can kill this I should get a medal."

The company has denied any undue influence over regulators. And its parent company, Bayer Crop Science, criticized the Environmental Working Group in its recent statement to CNN. "The group behind the new report has a long history of spreading misinformation about pesticide residues," spokeswoman Lord said.

EWG, a nonprofit organization based in Washington, denied those allegations. Bayer's criticism "must be taken with a grain of salt," EWG President Ken Cook said in a statement. In light of lawsuits, he said, Bayer was "desperate to continue hiding the truth."

Though it maintains that it is an independent organization, EWG acknowledges support from the organics industry, stating that its "corporate partners for general support and events" include Organic Valley and Stonyfield Farms. Foods labeled organic may not be grown with most synthetic substances, including glyphosate.

The group also has a "shared services agreement" with the Organic Voices Action Fund, a nonprofit organization funded by companies such as Nature's Path and Annie's -- both of which make cereal.