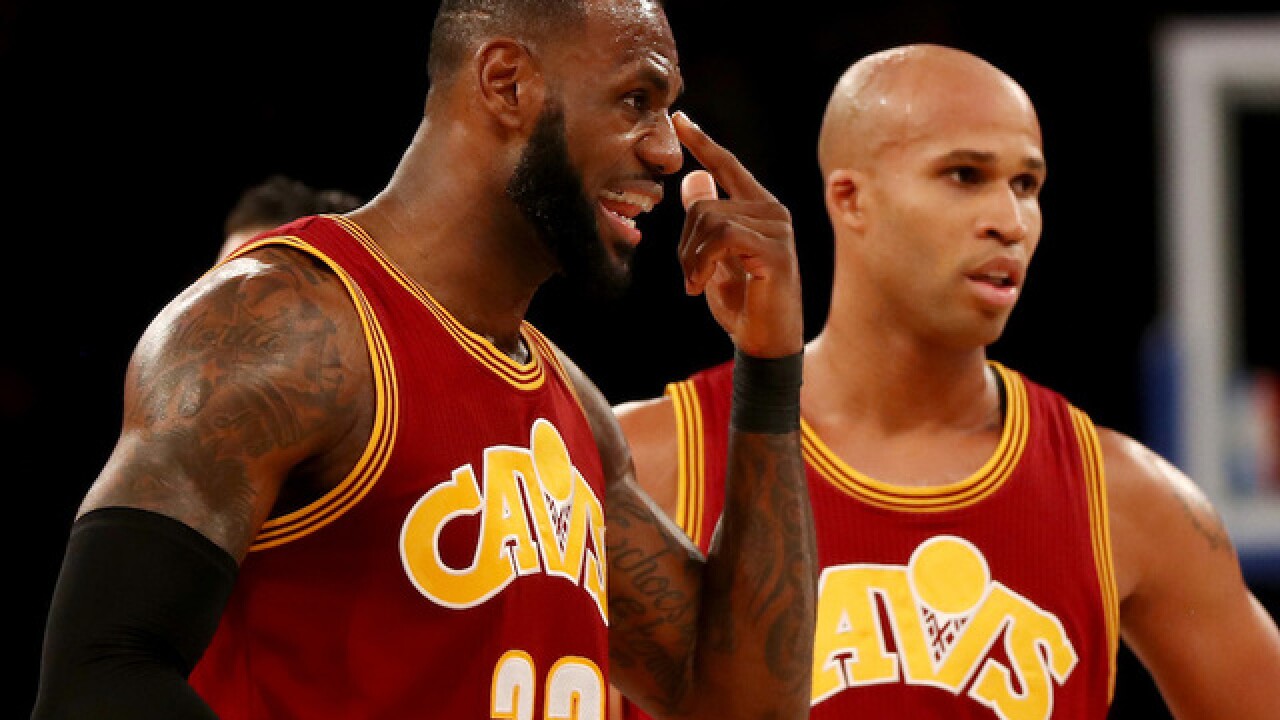 Copyright Getty Images
Elsa
<p>NEW YORK, NY - DECEMBER 07: LeBron James #23 of the Cleveland Cavaliers points to his eye after he was hit in the first half against the New York Knicks at Madison Square Garden on December 7, 2016 in New York City. NOTE TO USER: User expressly acknowledges and agrees that, by downloading and or using this Photograph, user is consenting to the terms and conditions of the Getty Images License Agreement (Photo by Elsa/Getty Images)</p>

The Cleveland Cavaliers became the latest group to try to take part in the water bottle flip challenge.

Unlike others, however, LeBron James and his teammates made their attempts during a nationally televised NBA game.

The Cavs beat the New York Knicks 126-94 on Wednesday, but during the waning moments James and several other teammates, including fellow star Kyrie Irving tried to perfectly flip a water bottle so that the bottle stay standing up after hitting the ground.

The incident had the feel of a group of teenagers trying to get away with a school prank, but the incident was caught on camera and commentated on before a national audience. Shortly after the video went viral on social media for the world to see.

According to ESPN, Irving successfully completed the flip in one attempt, though it was not caught on camera.

"Oh man, it's just a social media craze," Irving said according to the ESPN report. "The water bottle is just like — if you land it, you are just like a legend.

"I was just trying to follow in the kids' footsteps and really just put my mark on the water-bottle challenge, man," Irving added of others posting videos of epic bottle flips online. "It was awesome. But hey, move on."

James told ESPN he was just trying to have a good time.

"I always have fun," James said. "The game of basketball is always fun for me. Obviously, when you lose a game, you feel a certain way about it, you think about what you could have done better. But the game of basketball is fun, and for me, once the game -- I start showing up and I am not having fun no more, then I won't be sitting talking to you guys postgame."

For the record, here is how the challenge is done.