Italian officer allegedly killed by American teens was stabbed with knife brought from US, police say 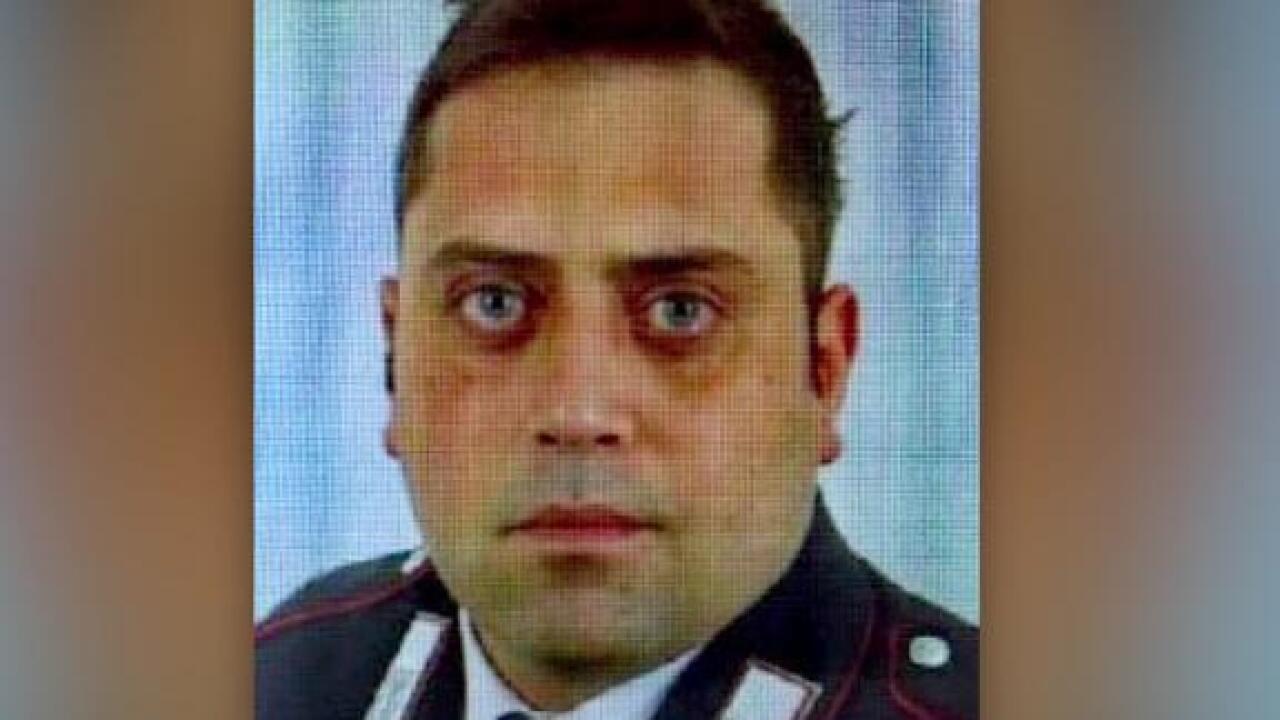 An Italian policeman who was allegedly killed by two teenage American tourists was stabbed 11 times with a knife carried into Italy from the United States, according to police in Rome.

Gen. Francesco Gargaro, of the Provincial Carabinieri Command, said the weapon was brought to the country by the 19-year-old suspect, Finnegan Lee Elder.

Gargaro added that some of the wounds sustained by the fallen officer, Mario Cerciello Rega, were "very big, 17 centimeters (7 inches) deep, the length of the blade."

Rega was killed Friday in Rome shortly after returning to work from his honeymoon. The 35-year-old was attempting to recover a backpack allegedly stolen by Elder and Gabriel Natale Hjorth, 18, after a botched drug deal, say officers. Police said that Elder confessed in the early hours of the interrogation on Friday to the killing.

Meanwhile, Rega's funeral was held in his hometown of Somma Vesuviana, near Naples, on Monday. His casket was draped with the Italian flag as it was carried into the same church where he was married less than two months ago.

Deputy Prime Minister Matteo Salvini, who has called for life prison sentences for the accused teens, attended the service.

The officer's death has gripped Italy -- the story is leading many of its newspaper headlines -- and hundreds of people gathered outside the church to pay their respects.

The incident unfolded after the two US citizens approached a man about buying drugs, according to police. After being sold crushed aspirin instead of cocaine, officers allege that the Americans stole a backpack off the man.

The teenagers subsequently answered the owner's cellphone, which they had also taken, and told him "they would not return the backpack without 100 euros ($111) and 1 gram of cocaine," police added.

The owner of the stolen bag then contacted the police and two unarmed plainclothes officers met the American suspects under the guise of retrieving it, police said.

Both Americans are accused of assaulting the policemen, who reportedly identified themselves as law enforcement officers during the meeting early on Friday morning. Elder is accused of stabbing Rega 11 times before fleeing the scene.

The two Americans were arrested Friday evening inside their hotel room, close to the scene of the stabbing. They are accused of aggravated murder and attempted extortion, police said.

At the hotel room, police said they found the weapon hidden in a ceiling panel as well as the clothes worn during the crime.

Elder recognized the knife police say is the murder weapon "as his own," according to court documents seen by CNN.

The two suspects have turned on each other, according to those documents. The teenagers accuse each other "reciprocally" and their stories are "absolutely in contrast" with one another, the documents said.

They also add that Hjorth's testimony is closer to the police's version of events. Elder is accused of the stabbing, though both are being held on suspicion of murder.

Over the weekend, the police alleged that both Americans confessed to taking part in the assault, and say Elder confessed in the early hours of the interrogation on Friday to murder.

According to the court documents, Elder had not understood that the two men that approached them were police officers.

Elder's appointed public prosecutor, Francesco Codini, said that during his court appearance Saturday his client "maintained his right to remain silent" in front of a judge.

Elder's family said in a statement on Monday that the US consul in Rome was allowed to briefly visit Elder.

"We continue to gather facts about his case through his legal representatives. Meanwhile we are grateful that he has been provided medical care," the statement said.

The family said it plans to go to Rome "soon."

"As always, our hearts go out to the family and friends of Officer Rega, who have suffered an unimaginable loss," the family added in the statement.

Elder's father, Ethan Elder, spoke briefly with CNN outside his San Francisco home Sunday and called his son's case a "precarious situation." Ethan Elder says he wants people to know his son is "a good man."

Italian police can legally hold suspects for an entire year without official charges.

The arrests have also raised questions over a leaked photo that appears to show one of the American suspects blindfolded at a police station in Rome. The photograph was leaked to the respected Italian newspaper Corriere della Sera.

Suspect Hjorth's lawyer, Emiliano Sisini, confirmed to CNN that his client was the blindfolded suspect in the picture. He does not know how long Hjorth was blindfolded for, but said the incident took place before his interrogation.

Italian police have confirmed the authenticity of the photo, and told CNN that a two-pronged investigation has been launched into why the suspect was blindfolded and who leaked the photo to the press.

"The general command of the Carabinieri police strongly distances itself from the photo and the distribution of the photo of the people detained for the homicide of the Officer Mario Cerciello Rega. The provincial Carabinieri command of Rome is quickly carrying out investigations to locate who is responsible," police said in a statement Sunday.

Salvini commented on the blindfold photo Sunday, saying in a statement: "To those complaining about the blindfolding of the arrested, remember that the only victim to cry for is the man, the son, the husband who is 35 years old, a Carabinieri officer, a servant of the homeland who died in service at the hands of the people who, if guilty, deserve only life imprisonment."

The day before, Salvini had called for life-long prison sentences for the accused teens, despite them not having been put on trial.

"Hoping that the murderers of our poor policeman will never get out of prison, I remind the do-gooders that in the United States whoever kills risks the death penalty. I'm not saying we should go that far, but life in prison (obviously working), this, yes!" Salvini wrote in a message on Twitter on Saturday.