Hurricane Florence is trudging across the Carolinas, submerging homes, with days of rain in store 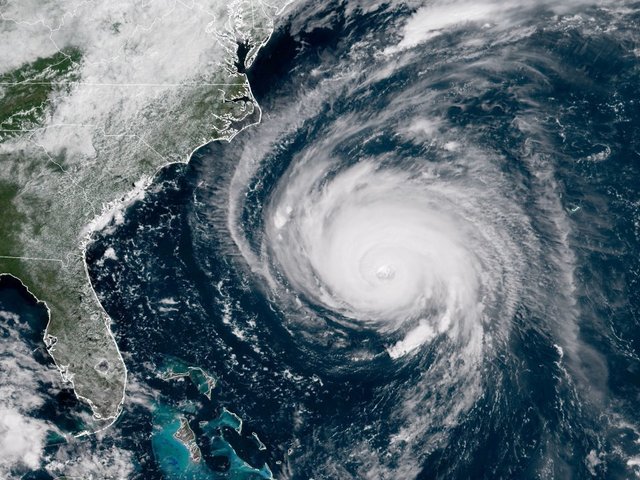 <p>Citing the relief efforts after Hurricane Maria, President Donald Trump says the federal government is ready for Hurricane Florence. That storm, downgraded to a Category 2 hurricane, is expected to fully hit the Carolinas on Friday.</p><p>&quot;I think that Puerto Rico was an incredible, unsung success,&quot; Trump said.&nbsp;</p><p>That&#39;s despite&nbsp;<a href="https://www.cnn.com/2018/08/31/health/puerto-rico-deaths-names-update/index.html" target="_blank">new estimates</a>&nbsp;that almost 3,000 people died as a result of the storm &mdash; a number Trump now&nbsp;<a href="https://twitter.com/realDonaldTrump/status/1040217897703026689" target="_blank">doesn&#39;t believe is accurate</a>, blaming Democrats for inflating the number for political gain.&nbsp;</p><p><b>SEE MORE: <a href="https://www.newsy.com/stories/56e721dfcd9c3dd3363eecc6-54bfc99f8ce7e03f09a4e90c-5a8eeb238ce7e09f1160d1f6/">Resilience: Puerto Rico In Recovery (Trailer)</a></b></p><p>Some of Trump&#39;s critics denounced his latest tweets and statements on how he handled the response to Maria almost a year ago.&nbsp;</p><p>&quot;You did not do a good job in Puerto Rico,&quot; San Juan Major Carmen Yul&iacute;n Cruz said.</p><p>&quot;The Trump administration did too little and did it too late,&quot; U.S. Sen. Elizabeth Warren said.&nbsp;</p><p>&quot;If he thinks that&#39;s an unparalleled success, god only knows what he would think a failure would be,&quot; U.S. Rep. Gerry Connolly said.</p><p>Others argued the criticism of Trump was overly harsh.&nbsp;</p><p>&quot;I think that the FEMA director and others who were there, I think they did everything they possibly could,&quot; U.S. Rep. Chris Stewart said.&nbsp;</p><p><b>SEE MORE: <a href="https://www.newsy.com/stories/why-a-category-2-hurricane-florence-is-still-dangerous/">Hurricane Categories Don't Tell You Anything About The Water</a></b></p><p>But politics aside, FEMA says it learned from its shortcomings in responding to Maria and other disasters last year. And those lessons are helping the agency better prepare for Hurricane Florence.</p><p>In&nbsp;<a href="https://www.fema.gov/media-library-data/1531743865541-d16794d43d3082544435e1471da07880/2017FEMAHurricaneAAR.pdf" target="_blank">a report released last July</a>, FEMA admitted it was insufficiently prepared to handle multiple hurricanes in a short amount of time &mdash; Hurricane Irma struck the Caribbean two weeks before Hurricane Maria. As a result, the agency didn&#39;t have nearly enough supplies or qualified staff to send to Puerto Rico.</p><p>We should note the response to Hurricane Maria was made especially challenging by these one-off factors: It was the third major hurricane of the season, it struck outside the continental U.S., and Puerto Rico&#39;s electric grid and financial situation was already in disarray.</p><p>By comparison, Hurricane Florence is the first major hurricane of 2018, so FEMA and local authorities have had more time to prepare.&nbsp;</p><p>The FEMA report also mentioned what it called collaboration and communication &quot;shortfalls&quot; with Puerto Rican government officials.&nbsp;</p><p>To avoid those issues, the agency created&nbsp;<a href="https://www.fema.gov/fema-integration-teams" target="_blank">FEMA Integration Teams</a>, which are groups of experts and technicians permanently deployed in various states to help local officials better prepare for future disasters. North Carolina was&nbsp;<a href="https://www.fema.gov/news-release/2018/04/17/fema-launches-first-fema-integration-team-north-carolina-0" target="_blank">the first state to receive that support</a>.</p><p>As for the power outage that left&nbsp;<a href="https://www.google.com/search?q=millions+without+electricity+months&oq=millions+without+electricity+months&aqs=chrome..69i57.13119j0j7&sourceid=chrome&ie=UTF-8" target="_blank">hundreds of thousands of Puerto Ricans in the dark for months</a>, the agency will now rely on workers from private power companies to begin repairs after Florence.&nbsp;<a href="https://www.tdworld.com/electric-utility-operations/bracing-impact-more-40000-workers-17-states-prepare-hurricane-florence" target="_blank">An industry magazine</a>&nbsp;says more than 40,000 workers from at least 17 states have already been mobilized.</p><hr><b>Trending stories at <a href="http://www.newsy.com">Newsy.com</a></b><ul class="inline-related-links"><li><a href="http://www.newsy.com/stories/gm-recalls-more-than-1m-vehicles-over-power-steering-defect/">GM Recalls More Than 1M Vehicles Over Power Steering Defect</a></li><li><a href="http://www.newsy.com/stories/preparing-children-for-dangers-of-hurricane-florence/">How Parents Can Help Kids Understand The Dangers Of Hurricanes</a></li><li><a href="http://www.newsy.com/stories/us-sanctions-2-companies-for-being-north-korean-fronts/">US Sanctions 2 Companies For Being North Korean Fronts</a></li></ul> 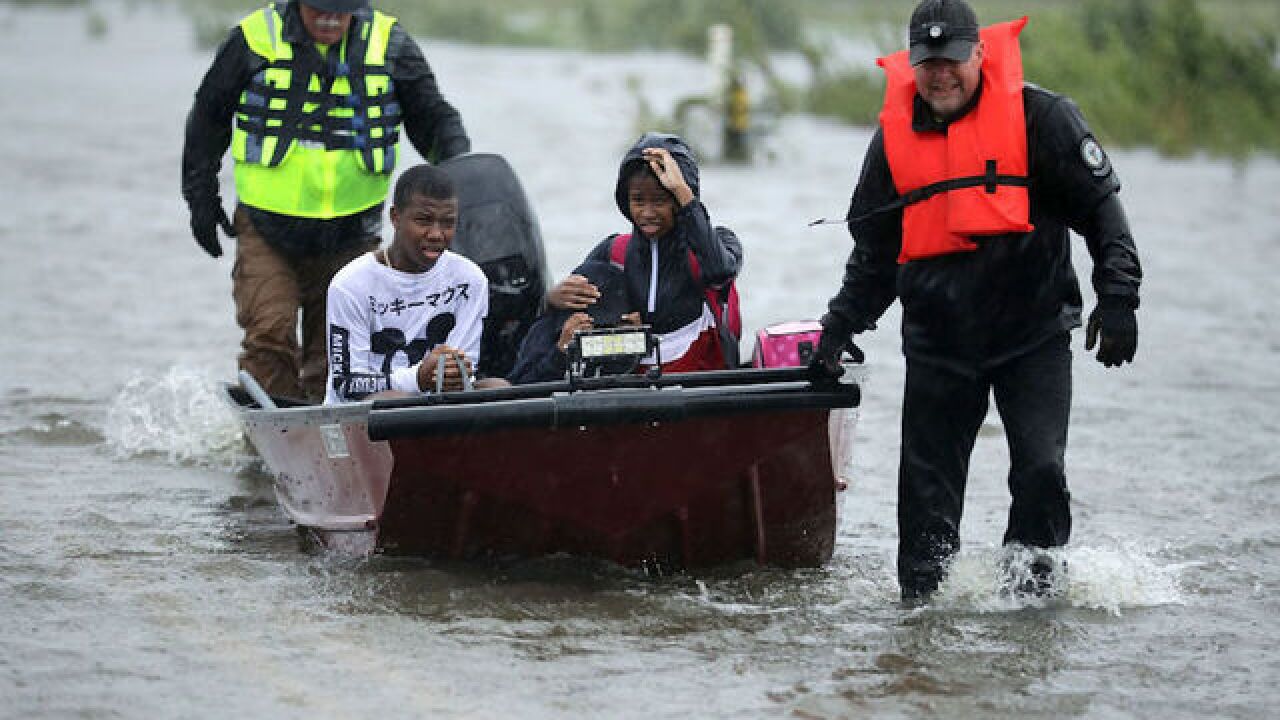 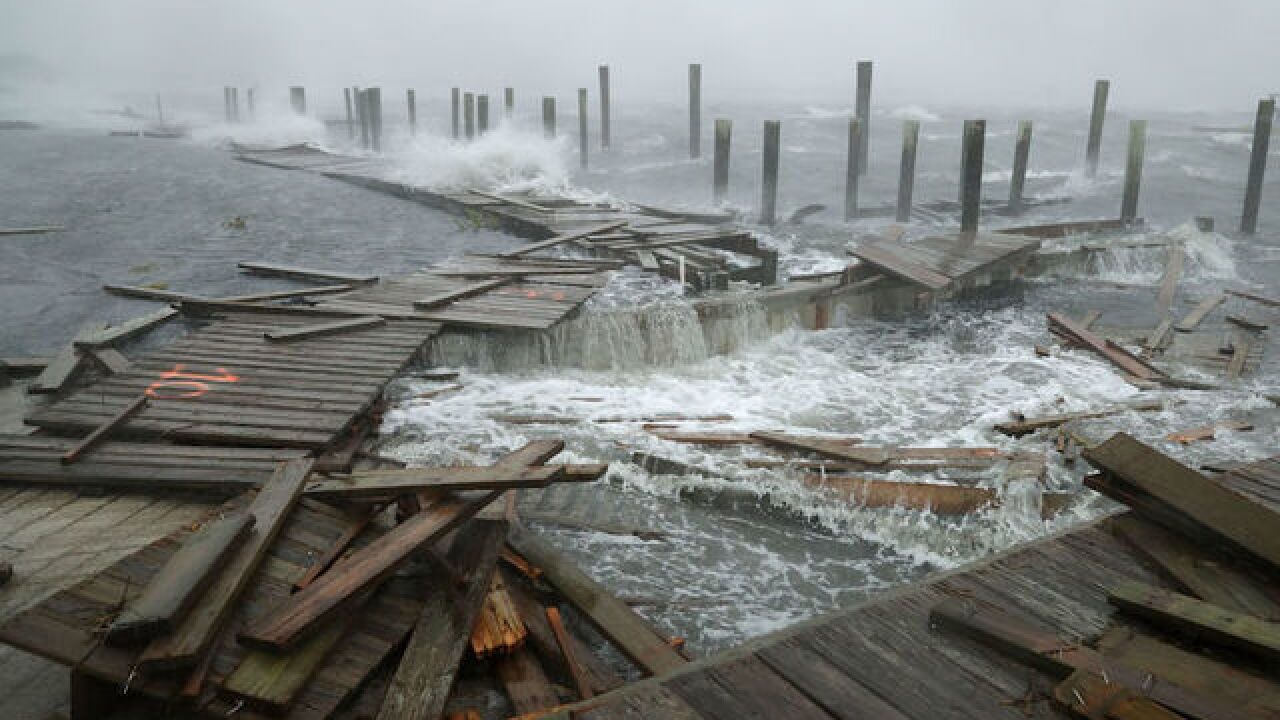 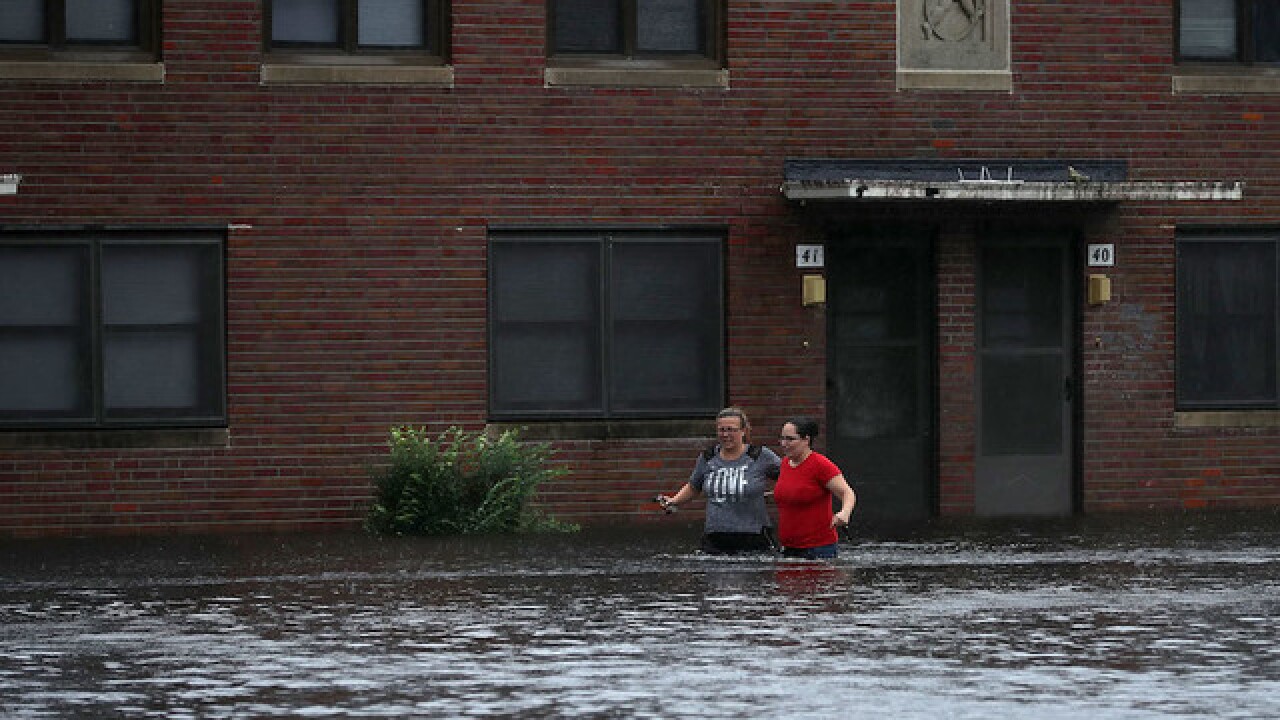 Hurricane Florence is inching along after making landfall Friday in North Carolina, trapping people in flooded homes and promising days of destruction and human suffering.

Storm surges, punishing winds and rain are turning some towns into rushing rivers -- and the Category 1 hurricane is expected to crawl over parts of the Carolinas into the weekend, pounding some of the same areas over and over.

"The storm is going to continue its violent grind across our state for days," North Carolina Gov. Roy Cooper warned residents in a news conference Friday morning.

In the besieged city of New Bern, North Carolina, rescuers had plucked more than 200 people from rising waters by midmorning Friday, but about 150 more had to wait as conditions worsened and a storm surge reached 10 feet, officials said.

Florence's rain will bring 40 inches to some parts of the Carolinas, forecasters said. Rainfall totals will be similar to those in hurricanes Dennis and Floyd in 1999, the National Weather Service's Chris Wamsley said

"The only difference is, back then it was within 14 days," he said. With Florence, "we're looking at the same amount of rainfall in three days."

By Friday morning, Florence already had:

• Forced 26,000 people into more than 200 emergency shelters across the Carolinas.

• Forced more than 60 people to evacuate a hotel in Jacksonville, North Carolina, after part of the roof collapsed, city officials said.

• Canceled more than 1,100 flights along the East Coast on Friday and Saturday.

• Florence's location: By 1 p.m. Friday, Florence's center was about 35 miles northeast of Myrtle Beach, South Carolina, and was crawling at 6 mph, with maximum sustained winds of 75 mph.

• Flooding for miles: Up to 40 inches of rain, and storm surges pushing water inland and not allowing rivers to drain, "will produce catastrophic flash flooding and prolonged significant river flooding," the National Hurricane Center says . "You're going to have flooding miles and miles inland," the center's director, Ken Graham, said.

• Areas threatened: A hurricane warning is in place for South Santee River in South Carolina to Bogue Inlet and Pamlico Sound, North Carolina. Surges of 10 feet were reported early Friday in Morehead City and elsewhere in North Carolina, the National Weather Service said.

• Nuclear plant shutdown: A nuclear power plant in Brunswick, North Carolina, shut down operations because of the storm, the US Nuclear Regulatory Commission said on Twitter on Friday morning. "Plant procedures call for the reactors to be shut down before the anticipated onset of hurricane-force winds," agency spokesman Joey Ledford told CNN. Federal officials had said midweek they weren't concerned about that facility or five other nuclear plants in the storm's path, calling them "hardened." Expert scientists, however, had said they were worried about Brunswick because of scant public information about its readiness.

More than 1 million people had been ordered to evacuate before the streets became inundated.

Florence's circulation was pushing water ashore, especially north of its eye, in coastal or riverside towns such as New Bern and Belhaven, turning land to lakes.

In New Bern, where dozens awaited rescue Friday morning, Peggy Perry said rising water forced her into the upper level of her home.

"In a matter of seconds, my house was flooded up to the waist, and now it is to the chest," said Perry, who was trapped early Friday with three relatives. "We are stuck in the attic."

Craven County, where New Bern is located, had logged more than 100 service calls from residents trapped on their roofs or in their cars, county spokeswoman Amber Parker said early Friday.

In Belhaven, the Pungo River roared into town, crashing up against homes at a waist-high level and higher late Thursday and early Friday, video from Amy Johnson showed.

Morehead City resident Rebecca Marson decided not to evacuate because her surgeon husband wanted to remain behind with other first responders. They're riding out the storm at their home with four children -- ages 11 to 17 -- a friend, four dogs, two chinchillas, a cat and a lizard.

Marson said they'd lost power and the winds were howling outside, but they had enough food and water to last for days.

Employees at New Bern's WCTI TV station fled their studio Thursday night due to rising floodwaters. A posting on social media showed a meteorologist saying on air they had to evacuate. In the footage, he leaves the studio, with radar of Florence's rain bands playing on a loop.

In Morehead City, Brooke Kittrell rode out the storm Thursday and Friday with her boyfriend aboard their docked boat, hoping it didn't break loose and slam something.

She succeeded -- staying awake all night, retying broken dock lines in howling winds. But there were times she thought they wouldn't survive, she told CNN.

"I honestly cried," Kittrell said. "I was born and raised here and been through every storm the last 30 years, but this one seems to be doing more damage than we expected."

By Friday morning, the shore was flooded, and buildings were damaged, in video she put up on Facebook.

Officials in several states have declared states of emergency, including in the Carolinas, Georgia, Virginia and Maryland, where coastal areas are still recovering from summer storms.

Florence is one of four named storms in the Atlantic.