PORT RICHEY, Fla. — Sexually explicit text messages and a confession from his wife — that is how Robert Abruzzese says he found out she was having an affair with a married Florida Highway Patrol Trooper.

Trooper Scott Maus resigned on Dec. 27 after Abruzzese filed a formal complaint against the officer on Dec. 22.

@FLHSMV Trooper Scott Maus resigns following accusations of misconduct. Husband uncovers alleged affair. Tells @abcactionnews the trooper had sex with his wife while he was on duty and sent explicit text messages and selfies. pic.twitter.com/qoL6FQ6FTl

“It better send a message, you know what you have a badge, it’s not a license to do whatever you want,” Abruzzese said.

It was Dec. 8 that Abruzzese said his wife was in a car crash near their Port Richey home. The crash report shows that Maus was the responding officer. It was that interaction that Abruzzese says led to the affair.

“Just been some really unusual behavior after the accident. A lot of late night texting and going to places (she) wouldn't normally go to,” Abruzzese said. “Something didn’t feel right.”

After going through his wife’s phone, Abruzzese said his wife admitted to having sex with Maus while he was on duty at a local motel and in his patrol car behind a vacant church.

Tampa-based WFTS obtained the text messages and selfies Abruzzese found on his wife’s phone. We called the phone number listed in the screen grab and a man who identified himself as Maus answered the phone and told us “no comment” and hung up. 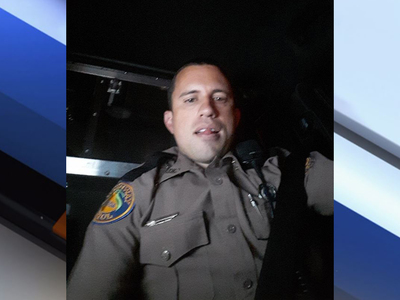 Abruzzese said he intercepted a text message to his wife that read, “you like being the whore to a State Trooper?” Abruzzese said he responded back, “this is her husband I’ll ask your supervisor that question.”

Abruzzese said the trooper asked him to handle the matter privately without getting his superiors involved. Maus later apologizes, writing in a message “I am very and truly sorry for what happened and my part in it. I can assure you I do not want to cause you any more problems and will cease all contact with her immediately. Everything will be deleted and erased.”

Maus went on to write “on a side note I can’t get you out of traffic tickets but should you get one I can offer advice on how to beat them in court.”

Abruzzese said he couldn’t believe that his marriage of nearly 15 years was falling apart and that was Maus’ response via text.

Abruzzese said he is meeting with investigators. He said doesn’t think this is the first time the trooper has done this.

“Considering the location that he had picked out and the amount of time that it took in between from the first meeting at the accident and when they did meet up and the explicit text and voicemails, absolutely I definitely think he’s done this before,” Abruzzese said.

Abruzzese said he felt that officers taking his initial complaint didn’t believe his story. He said it wasn’t until he called his local representative and the governor’s office that he started getting phone calls from investigators with FHP.

“A hundred percent relief," he said. "It is justification. The way the FHP was dragging their feet at the beginning. At least I can go in there holding my head up high. There’s a lot of good cops out there, unfortunately, this one got in. But, he’s gone now that’s the bottom line.”

The Florida Highway Patrol takes all complaints very seriously. The Trooper has tendered his resignation which was accepted effective immediately. A thorough administrative investigation will continue to be conducted by the Department of Highway Safety and Motor Vehicles’ Office of Inspector General.