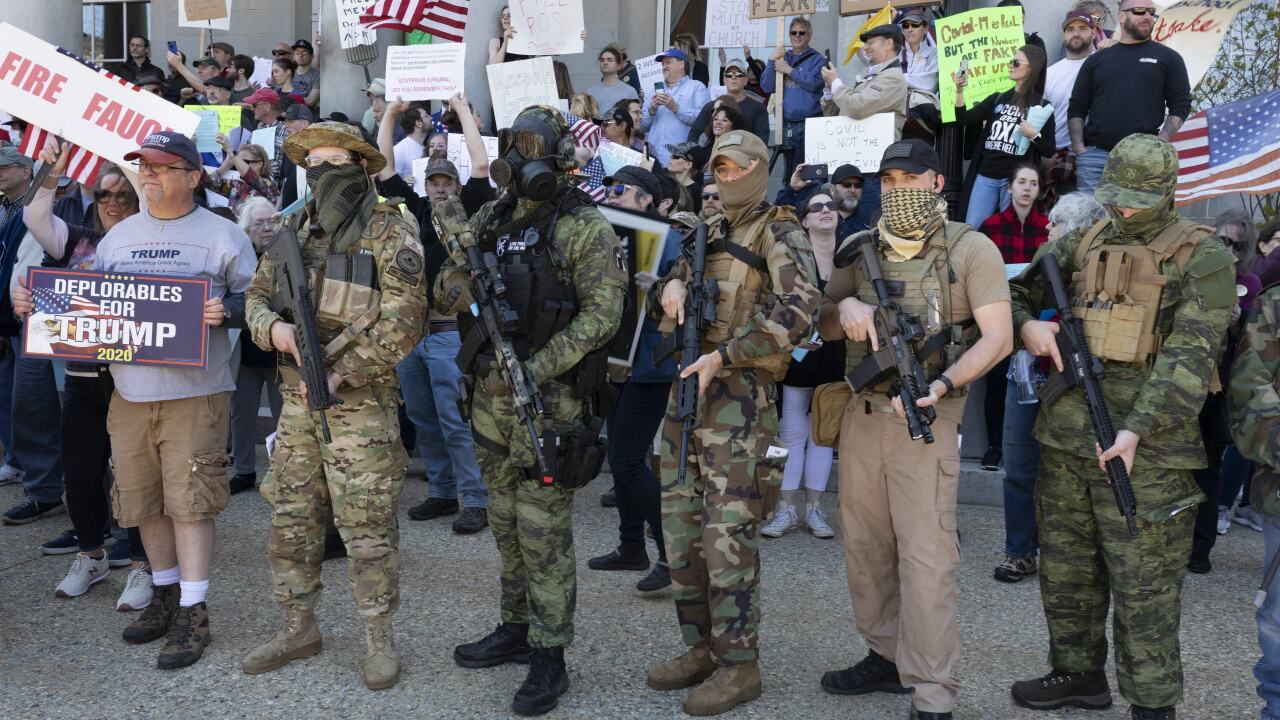 Copyright 2020 The Associated Press. All rights reserved
Michael Dwyer/AP
FILE - In this May 2, 2020, file photo, people, including those with the boogaloo movement, demonstrate against business closures due to concern about COVID-19, at the State House in Concord, N.H. Facebook says it is banning a “U.S.-based anti-government network" associated with the broader “boogaloo" movement, designating it as a dangerous organization similar to groups like ISIS and white supremacist groups and individuals already banned from its service. As part of the announcement, Tuesday, June 30, 2020 Facebook said it has removed 220 Facebook accounts, 95 Instagram accounts, 28 Pages and 106 groups that that comprise the violent Boogaloo-affiliated network. (AP Photo/Michael Dwyer, File)

OAKLAND, Calif. (AP) — Facebook has banned an extremist anti-government network loosely associated with the broader “boogaloo” movement, a slang term that supporters use to refer to a second Civil War or a collapse of civilization.

But the platform didn’t try to name the group, underscoring the difficulty of grappling with an amorphous network linked to a string of domestic terror plots that appears to obfuscate its existence.

Facebook designated the movement as a dangerous organization similar to the Islamic State group and white supremacists, both of which it already bans.

Facebook says it is removing groups, accounts and pages when they have a “clear connection to violence or a credible threat to public safety.” The company says it has removed 220 Facebook accounts, 95 Instagram accounts and 106 groups that comprise the “US-based anti-government network.”

Additionally, Facebook says it has removed 400 groups and over 100 other pages for violating its “Dangerous Individuals and Organizations” policy, because they hosted similar content as the violent network.

“So long as violent movements operate in the physical world, they will seek to exploit digital platforms,” wrote Facebook. “We are stepping up our efforts against this network and know there is still more to do.”