Due to the wildfires, California now has the most polluted cities in the world 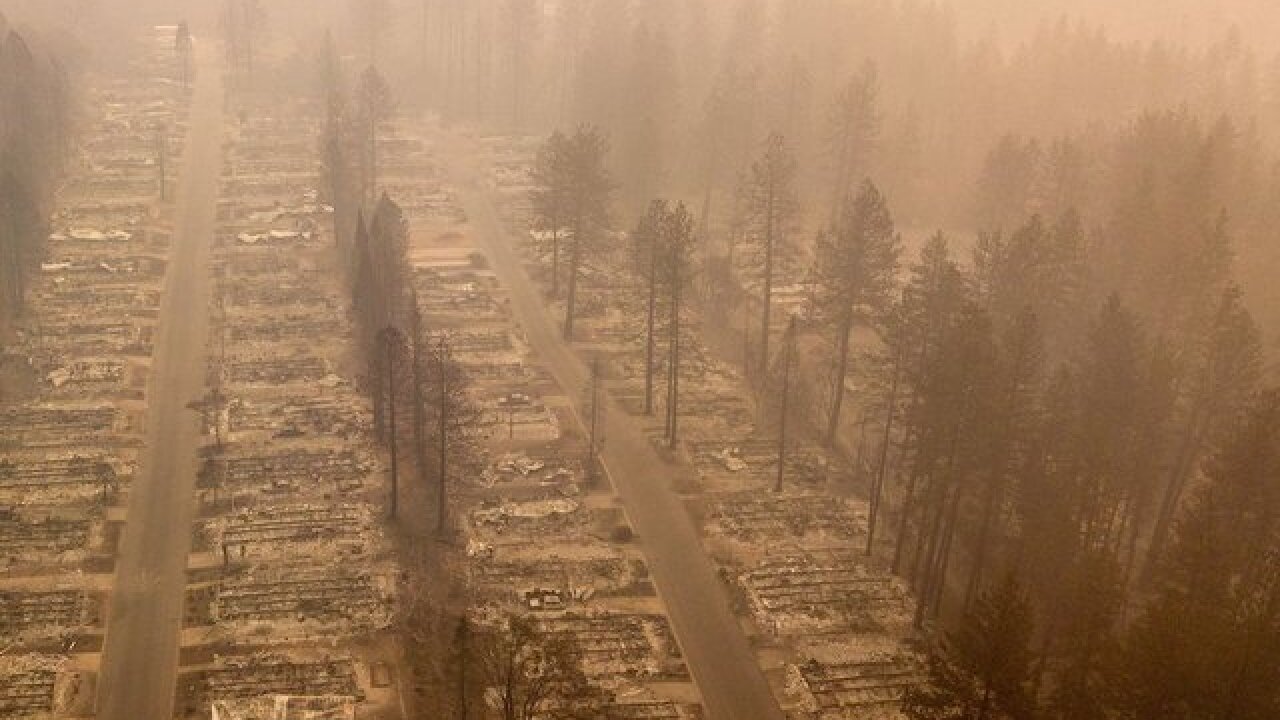 © 2018 Cable News Network, Inc.
Josh Edelson/AFP/Getty Images
<p>Due to the wildfires raging in Northern California, San Francisco, Stockton and Sacramento were the world's three "most polluted cities" on Friday morning, according to Berkeley Earth, a nonprofit that aggregates data from air-quality monitoring sites.</p>

Due to the wildfires raging in Northern California, San Francisco, Stockton and Sacramento were the world's three "most polluted cities" on Friday morning, according to Berkeley Earth, a nonprofit that aggregates data from air-quality monitoring sites.

PurpleAir, which has a network of sensors around the world, also showed that California had worse air than traditional smog hotspots in India and China.

CNN meteorologist Brandon Miller confirmed that "no region on Earth had as many air quality stations in the highest ranges" of particulate matter, or PM, the toxic mixture of particles and droplets that worsens after wildfires.

Those values, he said, "stretched for hundreds of miles over Northern and Central California, from the mountains to the valleys and the coast."

Schools, colleges and public transit have closed as smoke from the Camp Fire descends on the region.

"It appears to be the worst air quality ever experienced in San Francisco," said Dan Jaffe, a professor of environmental chemistry at the University of Washington. He called the situation "an air quality emergency," and experts said the smoke could undo decades of progress on pollution.

"We have made tremendous efforts and investment to clean up our air with considerable benefits for public health," said Dr. Daniel Jacob, a professor of atmospheric chemistry and environmental engineering at Harvard University. "But now it's like we're getting stabbed in the back with those wildfires."

Some call cancellations 'too little, too late'

Public schools in San Francisco and Alameda County were closed Friday, along with UC Davis and UC Merced. UC Berkeley also canceled Friday's classes, but some students criticized the university's decision to stay open Thursday as smoke descended on the campus.

The school's student association wrote a letter to their chancellor denouncing the "administration's insufficient response to these public health risks" and urging administrators to allocate emergency funds for masks and mobile air filtration units.

"Campus buildings are not equipped to filter out the pollutants making the air indoors just as harmful as it is outside," the group wrote. Some students, even those without pre-existing conditions, said they felt sick.

"I had a bloody throat, bloody nose, a cough, dry and watering eyes, and my throat is still very sore and dry," freshman Sabrina Thorn said. "I almost passed out trying to go to class yesterday. My professor told me to go home."

Thorn's sorority sister gave her a mask, but freshman Samantha Greene said that other students have struggled to find them. That's because the university's health service is not distributing them to all students -- just those with medical conditions like asthma.

"There are over 40,000 students at the university," spokesman Dan Mogulof said, "and we just don't have access to masks of that number."

Some students, though, still think the school needs to be doing more.

"I have many friends who have been coughing up blood and [were] forced to seek emergency medical help because of the air and Berkeley's unwillingness to act," Greene said.

The student association itself decided to hand out masks Thursday, she said, leading to large crowds as people "desperately [tried] to get respirators from [the] student-run club, which ran out in the first five minutes and turned into a mob scene."

In stores near Berkeley, masks also quickly sold out, Greene said, leading to "an absurd sort of competition between students to get one." Students lucky enough to get the masks, she said, were trying to sell them at "absurd prices."

In a message to students announcing Friday's cancellation, the school's chancellor, Carol Christ, said Thursday that Berkeley had "a limited supply of appropriate 'N-95' respirators available for those students with medical conditions that may make them particularly susceptible to the impact of degraded air quality."

Greene called that "too little too late" and said masks are still difficult to come by. The university told students that "even these relatively advanced masks provide limited protection and are not a substitute for staying indoors."

Jaffe, however, said that "the masks definitely help" if worn properly and are "better than nothing," although staying in a building with filtered air offers the best protection.

The university, for its part, says it's doing the best it can. "Our students, like our staff, our faculty and our neighbors, are without a doubt being impacted by one of the greatest natural disasters in California's history," Mogulof said. "The university just does not have the ability to completely mitigate the impacts of this wildfire."

Staying safe in the smoke

Particulate matter is the "number one environmental killer in the world," Jacob said, and "the levels that are present in those areas affected by wildfires are like you might expect on a very polluted day in China or India."

Smoke from fires releases particles small enough to make their way through our nose and into our lungs, Jaffe added, and "young children and the elderly have the greatest risks for immediate health concerns."

PM can aggravate asthma, decrease lung function and increase the risk of cardiovascular events such as stroke, according to a study published last year in the Lancet. And because children with developing airways breathe more air per pound of body weight than adults, they can experience more severe symptoms.

"We give people advice to say indoors and to reduce exercise and things like that," Jaffe said, "but those don't mitigate the problem too much." That's especially true in San Francisco, where many don't have air conditioning.

Without any sort of "controlled system" to filter air, Jaffe said, a building doesn't offer much protection against particulate matter. When air is properly filtered, though, people can "reduce their PM exposure by about 90%" by being inside, he said.

If you have to go outside, Jaffe recommends an N95 respirator, a specially designed mask that provides "very efficient filtration of airborne particles" when worn correctly, according to the Food and Drug Administration.

The agency warns that "a proper fit cannot be achieved on children and people with facial hair," which means the masks "may not provide full protection" for those people.

But even if you are able to protect your lungs, Jaffe said, diminished air quality can be demoralizing. "There's a mental health issue too," he said. "Everybody is unhappy, and it's hard to enjoy life."