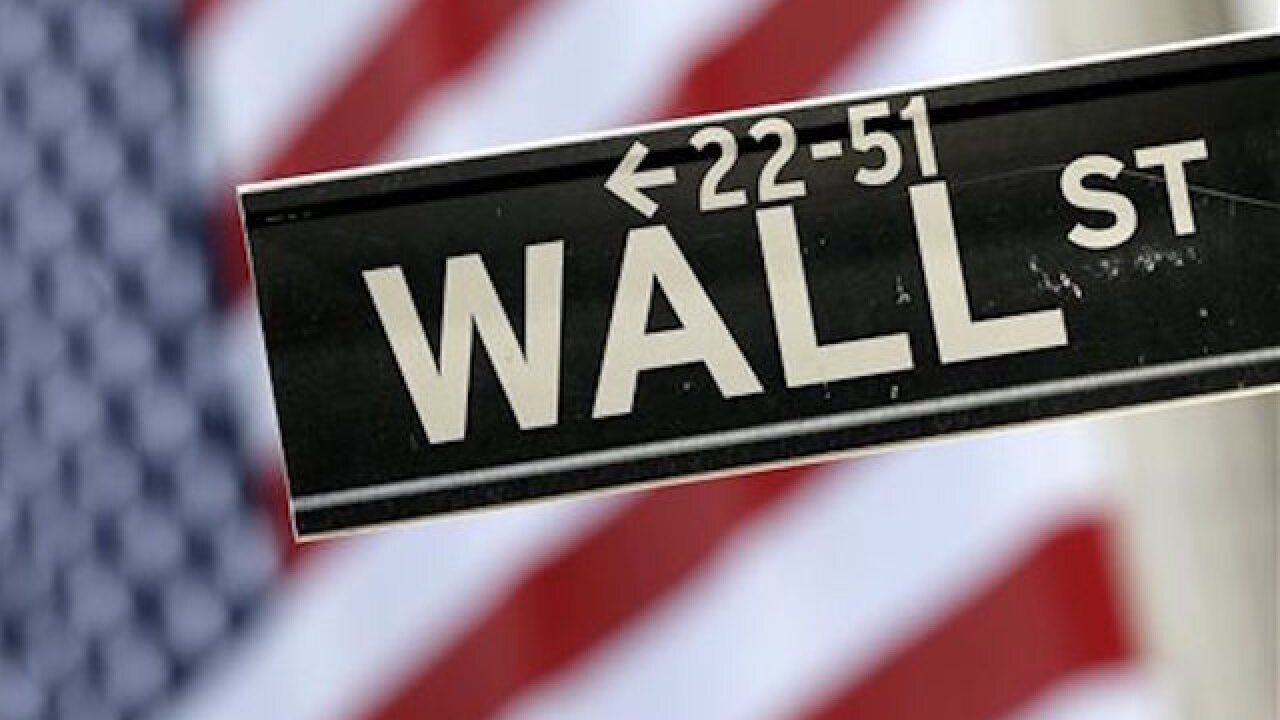 Mary Altaffer
<p>FILE - In this Tuesday, Sept. 8, 2015, file photo, a Wall Street street sign is framed by a giant American flag hanging on the facade of the New York Stock Exchange. Global shares were mixed in trading, Wednesday, Dec. 30, 2015, with only some markets cheered by an overnight rally as investor sentiment grew cautious on lower oil prices. (AP Photo/Mary Altaffer, File)</p>

The stock market is still sinking but the selling frenzy has eased just a bit.

The Dow opened down about 100 points on Thursday morning, rebounding from sharp overnight losses. The Nasdaq started positive before slipping back into the red. The S&P 500 lost about 0.6%.

Wall Street is attempting to recover from Wednesday's plunge, which wiped 832 points off the Dow.

The Nasdaq in particular has gotten rocked in recent days. Investors have bolted from the index, which contains many tech stocks, because they are concerned about holding some of the market's riskiest stocks in a downturn. A proxy for the tech sector had its sharpest plunge in seven years on Wednesday.

The S&P 500 was on pace for its sixth-straight decline, something that hasn't happened since just before President Donald Trump's election nearly two years ago. And the Nasdaq has already plunged 8% this month.

Concerns about inflation were eased a bit by a report released on Thursday that showed consumer prices rose in September less than feared.

Still, tech stocks including Amazon and Apple lost ground in early trading. Square (SQ) slumped 6% after announcing the departure of its chief financial officer. But other tech stocks showed signs of life. Netflix and Twitter were trading flat to slightly higher.

Stocks have turned sharply south because investors are increasingly concerned about rising interest rates. As the Federal Reserve raises rates to prevent runaway inflation, investors have been getting out of bonds, driving down their price and driving up their yields. Suddenly, the return on bonds has become competitive with some stocks — particularly risky tech stocks.

The Dow plunged 832 points, or 3.2%, on Wednesday. Tech stocks took a beating, sending the Nasdaq tumbling 4% — its worst day since the Brexit referendum of June 2016.

That dragged down stock indexes in the United Kingdom, Germany and France on Thursday, all of which fell more than 1%. Benchmark indexes in Shanghai and Tokyo closed down 5.2% and almost 4%, respectively. Hong Kong's market was down over 3%.

The S&P 500's 3% plunge on Wednesday was rare. It's only happened in 0.6% of all trading days since 1952, according to Bespoke Investment Group.

The good news is that the market often springs back to life after such a deep sell-off. Bargain hunters scoop up beaten-down stocks and calmer heads prevail. On average, the S&P 500 has gained 0.4% the day after a 3% slide, Bespoke said.

That's what happened in February after the S&P 500 twice suffered 3% drops caused by fears about rising bond yields. Both sell-offs were followed by rebounds of more than 1% the next day.

But Yardeni is optimistic the market will rebound because corporate profits are robust and no recession is in sight.

"We remain bullish on the outlook for earnings, and expect the market to recover and make new highs going into next year," Yardeni wrote.