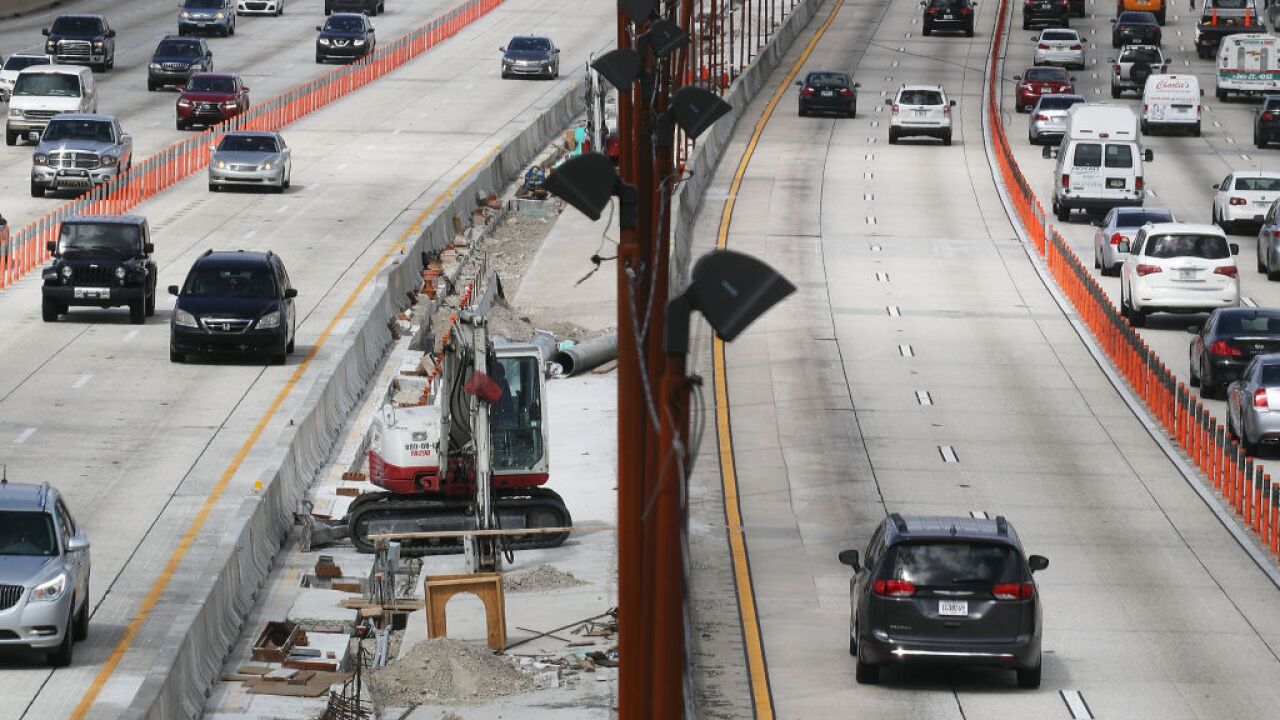 Democratic congressional leaders announced Tuesday after a meeting with President Donald Trump that an agreement had been reached on the price tag for a potential infrastructure plan: $2 trillion.

There is still no guarantee a plan that both sides agree to will ultimately come together and so far it appears that many details -- including how to pay for it -- have not yet been worked out. But the announcement nevertheless marked a rare moment of bipartisan cooperation, coming when the relationship between congressional Democrats and the President has become increasingly strained as Democratic lawmakers pursue investigations into Trump, his finances and his administration.

House Speaker Nancy Pelosi and Senate Democratic leader Chuck Schumer emerged from the meeting at the White House signaling optimism and describing it as a first step toward finding common ground. Both Schumer and Pelosi said they'd agreed to meet again to discuss more details, including how to pay for an infrastructure improvement plan.

"It was a very constructive meeting," Schumer told reporters outside the White House. "We agreed on a number, which was very, very, good, $2 trillion for infrastructure. Originally, we had started a little lower and even the President was eager to push it up to $2 trillion. That is a very good thing."

Raising the question of how to pay for any plan, which could become the key sticking point in negotiations, Schumer added, "We told the President that we needed his ideas on funding. ... Where does he propose that we can fund this? Because certainly in the Senate, if we don't have him on board it would be very hard to get the Senate to go along. We said we would meet in three weeks and he would present to us some of his ideas on funding. So this was a very, very good start and we hope it will go to a constructive conclusion."

White House press secretary Sarah Sanders called the meeting "excellent and productive" in a statement and said that "the President and the Democrat leaders also agreed to a meeting in the near future to discuss prescription drug prices."

Trump and lawmakers talked about a number below $2 trillion as their target for a big infrastructure package, but it was the President who eventually set the number, according to two people with direct knowledge of the discussion. Trump told lawmakers he liked the sound of $2 trillion more than something in the $1 trillion-plus range. The larger topline number sounded bigger and better, was how one of the people characterized the President's view.

Rebuilding America's infrastructure has long been talked about as an area of potential cooperation between Democrats and the President since both have described investing in infrastructure as a priority.

The meeting took place, however, against a backdrop of escalating hostilities between the administration and congressional Democrats. Following the release of the Mueller report , Democrats have argued that further investigation of the President is necessary and are also fighting to get hold of the full, unredacted report, while the President contends that Democrats are overreaching and merely trying to score political points as they target his administration.

Democratic leaders downplayed the idea that their ongoing investigations will make it more difficult to work with the President and emphasized that they believe it is possible to pursue oversight investigations while seeking collaboration on infrastructure.

"We think we can work with the President," Pelosi said, adding, "While we may have our difficulties in other areas, we cannot ignore the needs of the American people as we go forward."

"I believe we can do both at once," Schumer said. "We can come up with some good ideas on infrastructure. We want to hear his ideas on funding -- that's going to be the crucial point, in my opinion -- and the House and the Senate can proceed in its oversight responsibilities. The two are not mutually exclusive."

Schumer said that "in previous meetings, the President has said if these investigations continue, I can't work with you," but that in Tuesday's meeting "he didn't bring it up."

Schumer and Sen. Debbie Stabenow later told CNN that there was no talk at the meeting about impeachment, Democratic subpoenas or requests for information from the administration. Instead, they said, the focus was mostly on infrastructure, with some talk about immigration and the United States-Mexico-Canada Agreement on trade.

However infrastructure wasn't the only topic of conversation: According to a source in the room, Trump asked Sen. Patty Murray why she and Sen. Lamar Alexander didn't get something done on health care. According to the source, Murray said the White House made it clear at the time that Trump would veto their proposal. Trump responded that he had never said that, and he encouraged Murray to get back together with Alexander and come up with something.

The source also said Trump shared some white Tic Tacs with Pelosi. Trump offered Pelosi some Tic Tacs at the St Patrick's Day event at the Capitol, as well, per this same source.

High-ranking Democrats and administration officials came together to talk infrastructure

When Pelosi and Schumer sat down with the President to talk infrastructure, they were joined by other members of House and Senate Democratic leadership and congressional Democrats whose committees would play a role if a deal came together.

House Majority Leader Steny Hoyer, Majority Whip James Clyburn, Assistant Speaker Ben Ray Lujan, Richard Neal, the chair of the House Ways and Means Committee, and Peter DeFazio, the chair of the House Transportation and Infrastructure Committee, are also attending. DeFazio has been in contact with the Trump administration to discuss infrastructure "for some time now," according to a committee aide.

In addition to congressional Democrats and the President, a slate of administration officials also attended the meeting, according to a list of participants released by the White House.

Adviser to the President and Trump's eldest daughter, Ivanka Trump, was on the list of participants along with White House economic adviser Larry Kudlow, press secretary Sarah Sanders, Russ Vought, the acting director of the Office of Management and Budget, White House counsel Pat Cipollone, Kellyanne Conway, a senior counselor to the President, and Shahira Knight, the director of the Office of Legislative Affairs. Transportation Secretary Elaine Chao and C.J. Mahoney, the deputy US Trade Representative, were also on the list.

Past meetings between Trump and the top Democrats in Congress haven't gone smoothly. Just a few months ago, Trump walked out of a meeting with Pelosi and Schumer, calling talks aimed at ending a government shutdown "a total waste of time."

A key question -- and a potential stumbling block -- for any negotiations for an infrastructure package is how to pay for it. And even some allies of the President have cast doubt on the ability of the President and Democrats to strike a deal.

As Trump was meeting with Democrats on infrastructure, his chief of staff, Mick Mulvaney -- a key White House liaison to Capitol Hill -- was speaking to the Milken Conference in Beverly Hills, California. "Is this a real negotiation? I think it remains to be seen," he said during his talk.

Ahead of the meeting, Pelosi and Schumer sent a letter to the White House describing the need for infrastructure investment as "massive" and saying that need must be met with "substantial, new and real revenue." They wrote that any proposal also needs to "include clean energy and resiliency priorities" and "must have strong Buy America, labor, and women, veteran, and minority-owned business protections."

Pelosi told reporters earlier this month that she envisions a package that includes "at least $1 trillion" from the government, but added, "I'd like it to be closer to $2 trillion."

Cornyn conceded on Monday that finding the money to pay for any plan is likely to be challenging and emphasized that it will be important to for everyone involved "to hold hands and jump together because otherwise it gets to be too politically divisive."

"When you talk about infrastructure, people don't want to talk about it, how do you pay for it? It is not easy," he said. "We usually had a user fee system but that gets harder and harder to do -- when people drive electric cars and people get better mileage -- to generate the money. So, that's a serious conversation that we're going to have to have. My sense is we'll have to hold hands and jump together because otherwise it gets to be too politically divisive."

Last year the President unveiled an infrastructure plan of his own , but Democrats have criticized the proposal, arguing that it does not allocate sufficient funding.

The White House said that the plan would create $1.5 trillion for repairing and upgrading America's infrastructure. Only $200 billion of that, however, would come from direct federal spending.

"I have pooh-poohed his $200 billion mini nothing of an infrastructure bill," Pelosi told reporters earlier in the month, adding, "That is a formula that says let's not and said we did. That does nothing. And I think that he probably knows that that was not a successful path to building an infrastructure from sea to shining sea."