Are they telling the truth? Fact checking the Democratic debate 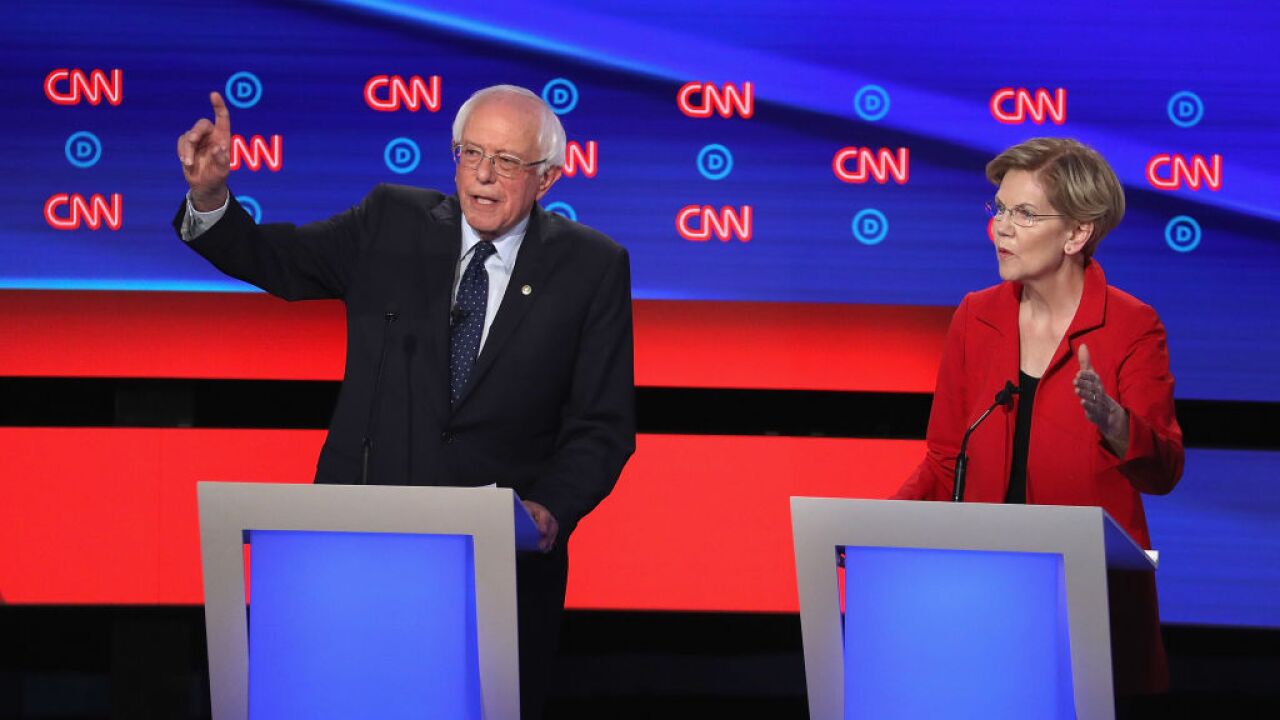 Editor's note: As the debate continues, refresh for updates.

Tuesday's debate features two of the more progressive candidates, Sen. Bernie Sanders of Vermont and Sen. Elizabeth Warren of Massachusetts, who will likely try to draw distinctions between themselves.

This could be the last chance for a handful of lesser-known moderate candidates to speak to a national audience, including Sen. Amy Klobuchar of Minnesota and former Colorado governor John Hickenlooper .

Here are the facts.

"Companies like Amazon that made billions in profits did not pay one nickel in federal income tax."

Facts First: Sanders is correct — for the previous two tax years, Amazon's own financial filings showed that it expected to receive money back from the federal government, not that it owed money.

According to an analysis by the Institute on Taxation and Economic Policy for the second year running, Amazon made a profit of more than $11 billion in 2018, but reported a $129 million tax rebate from the federal government.

Amazon does pay state taxes, and has also paid federal taxes in the past. The Wall Street Journal reported recently that Amazon's overall tax rate from 2012 through 2018 was 8%."From 2012 through 2018, Amazon reported $25.4 billion in pretax US income and current federal tax provisions totaling $1.9 billion," the Journal reported. "That is an 8% tax rate — low, but not zero or negative. Looking back further, since 2002, Amazon has earned $27.7 billion in global pretax profits and paid $3.6 billion in global cash income taxes, a 13% tax rate."

Amazon's SEC filings in 2017 show it did not expect to owe any federal tax, and in fact expected to get a $137 million refund from the federal government. It did, however, say it expected to pay $211 million to states.

Pete Buttigieg said that "Science tells us we have 12 years before we reach the horizon of catastrophe when it comes to our climate."

Facts First: Buttigieg is likely referring here to the definitive UN report that put the impacts of the climate crisis into stark relief.

The report did not set a 12-year deadline for "the horizon of catastrophe," though some politicians and media outlets have characterized it as such.

The science that Buttigieg was referring to comes from the United Nations Intergovernmental Panel on Climate Change (IPCC) report published in 2018.

The report was created to assess the impact of global warming and predicted what could happen if the planet warmed to 1.5 degrees Celsius above pre-industrial levels. The report did look at what could happen in 2030, 12 years from the date of publication, but the authors of the report have said that they picked that date to be helpful countries that had promised to meet deadlines to reduce carbon emissions set under the Paris climate accord .

The report did find that if the planet was able to keep warming to 1.5 degrees Celsius or under, countries would have to reduce about 45% of human-caused carbon dioxide emissions by 2030.

Vermont Sen. Bernie Sanders said "half of the American people are living paycheck to paycheck."

Facts First: National data on the paycheck-to-paycheck experience is hard to pin down, but a recent report from the Federal Reserve indicates that roughly 40% of Americans would have trouble covering an emergency expense of $400.

A relatively small and unexpected expense like a busted car or replacing a dishwasher can be a problem for many families without "adequate savings," according to the report.

When faced with an emergency expense of $400, 61% of Americans in 2018 say they could cover it either by using cash, savings, or a credit card paid off in the next billing period.

However, the remaining four out of 10 Americans would have much more difficulty covering the expense. And another 12% said they would be unable to pay their current month's bills if an unexpected $400 expense came up.

Sen. Elizabeth Warren said the current US law allows the President to separate migrant children from their parents at the border.

Facts First: This is true.

Last year, the Trump administration implemented its controversial "zero tolerance" policy, using a section of US law to criminally prosecute all adults at the southern border, therefore leading to the separation of thousands of families, given that children can't be held in federal jail with adults. The policy—and the section of the code at the center of it —have become a flashpoint in the immigration debate.

Democratic candidates remain divided over the law, referred to as Section 1325, with some wanting to instead make crossing the border illegally a civil offense, instead of a criminal offense. Warren is in favor of decriminalizing border crossings.

"So the problem is that right now the criminalization statute is what gives Donald Trump the ability to take children away from their parents. It's what gives him the ability to lock up people at our borders. We need to continue to have border security and we can do that, but what we can't do is not live our values," Warren said.