Trump on possible Kavanaugh delay: Senate has to 'do what they think is right' 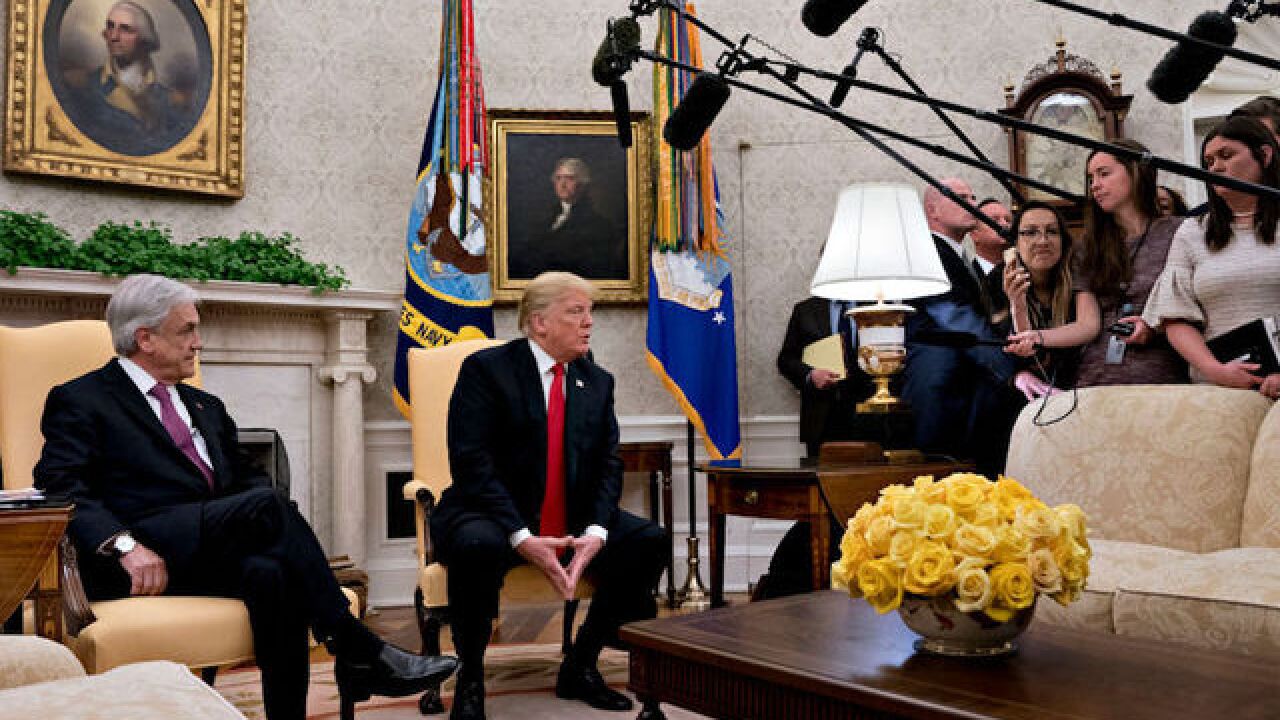 Image copyright 2018 Getty Images. All rights reserved. This material may not be published, broadcast, rewritten, or redistributed.
Pool
<p>U.S. President Donald Trump speaks as President of the Republic of Chile, Sebastian Pinera (L) listens during a meeting in the Oval Office of the White House on September 28, 2018 in Washington, DC. Trump said he would defer to Senate Judiciary Committee Chairman Chuck Grassley on whether to open an FBI investigation into sexual assault allegations against Supreme Court nominee Brett Kavanaugh. (Photo by Andrew Harrer - Pool/Getty Images)</p>

President Donald Trump signaled Friday he is open to directing the FBI to investigate allegations leveled against Supreme Court nominee Judge Brett Kavanaugh if the Senate Judiciary Committee believes it is necessary.

"They have to do what they think is right. They have to be comfortable with themselves," Trump said of the Senate Judiciary Committee. "That'll be a decision that they're going to have to make. ... Whatever they think is necessary is OK."

Trump was reacting on the fly from the White House to news that Arizona Republican Sen. Jeff Flake, a key swing vote on Kavanaugh's nomination, was demanding a week-long FBI investigation before a vote is held on the Senate floor to confirm Kavanaugh.

But Trump made clear he had been meeting with the Chilean president and did not yet have all the information about the discussions on Capitol Hill.

"I'm just hearing a little bit about it," Trump said. "I just want it to work out well for the country. If that happens, I'm very happy."

After a day spent sitting rapt before his television watching emotionally charged testimony, Trump awoke Friday confident in his Supreme Court nominee's chances. That optimism was evident by the parade of White House officials blanketing morning television to proclaim Kavanaugh's name all but cleared from sexual assault allegations, which were levied in vivid detail by his accuser Christine Blasey Ford.

But if Trump's team was buoyed by Kavanaugh's explosively irate response, they were not quite ready to proclaim outright victory ahead of the Senate Judiciary Committee's meeting.

"We believe we're getting there," Raj Shah, a White House spokesman detailed to Kavanaugh's confirmation team, said on CNN's "New Day," long before Flake requested a delay. "We think that yesterday was a strong step forward."

"I certainly hope so and I certainly think so and I think that we have to move forward in this process," said White House press secretary Sarah Sanders when questioned on ABC if the votes were in place for confirmation.

It was a cautiously upbeat approach that reflected a still-uncertain fate for Kavanaugh, whose angry and tearful performance on Capitol Hill played well at the White House but less clear how it affected the fence-sitting senators who will decide whether to confirm or deny him a seat on the court.

White House officials have been in regular contact with those Republican lawmakers, which include Sen. Susan Collins of Maine and Sen. Lisa Murkowski of Alaska.

Sanders told reporters on Friday that Trump himself hadn't yet spoken to those senators following the hearing. Trump did phone Senate Majority Leader Mitch McConnell on Thursday, and they agreed that the Senate should move forward on voting on Kavanaugh's confirmation -- though that was before Flake requested the delay of the full floor vote.