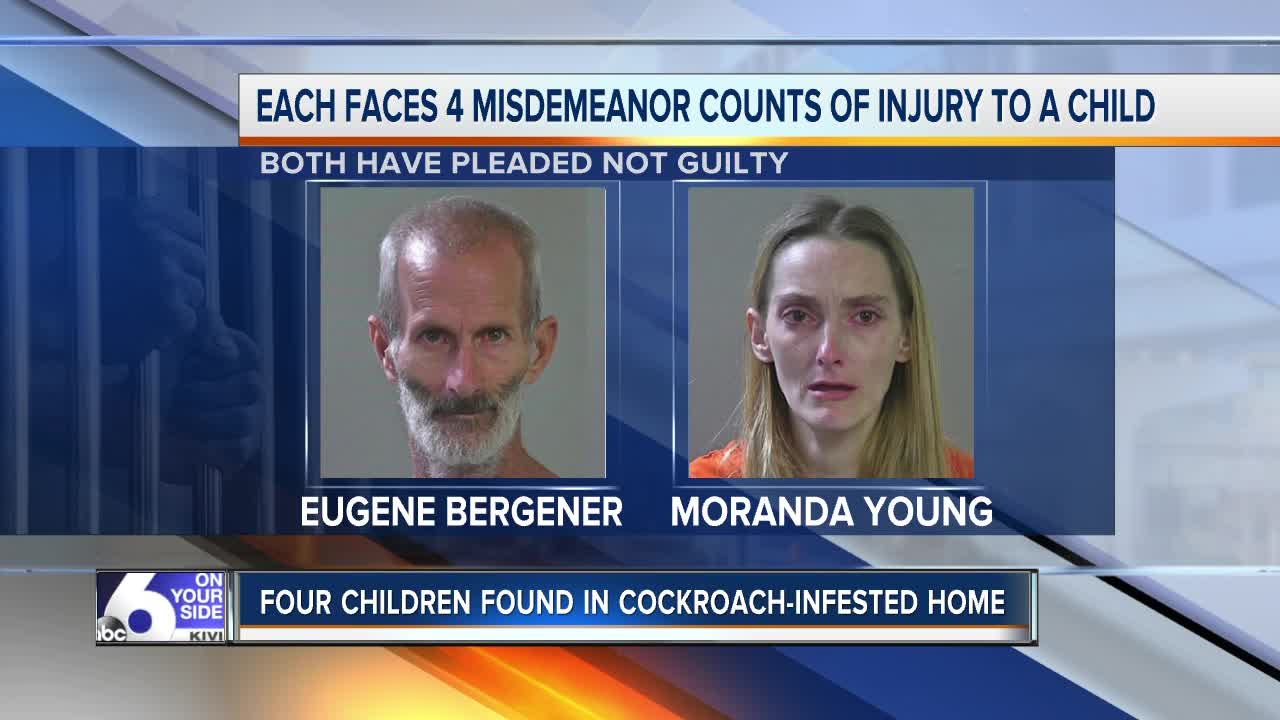 NAMPA, Idaho — A Nampa couple faces a number of injury to child charges after police say they found children living in a house infested with thousands of cockroaches and hundreds of spiders.

Officers were dispatched to a home in the 400 block of North Bailey Ave. in Nampa late Thursday afternoon on a report of a welfare check. A reporting party told police she had received second-hand information that the house could be infested with cockroaches.

According to reports, as the two officers approached the house, they could “smell a very pungent or odor of urine emitting from the residence … and (when) looking in the front window, (saw) cockroaches crawling on the sofa.”

A resident -– later identified as Eugene Bergener, 50 -– allowed officers to enter and search the house.

A nearby table “ … had stuff stacked on it, almost six feet high. Some of the stuff, I could not even see over, and I am 6’6” tall,” Richardson wrote. “As I continued, there was approximately 100 cigarette butts piled on the table. There were also open boxes of cereal that had cockroaches crawling all over (them).” In the laundry room, officers say they found dirty laundry was stacked about two feet high, also infested with the insects.

“There was not a single wall in this house that did not have cockroaches … and spider webs attached to the ceiling. As I walked into the master bedroom, there were dead cockroaches all over the floor,” the officer said.

In the bathroom, police say they found more cockroaches all over the floor, the tub, on the counter, and in each drawer, where children’s medication was stored.

“In my years of law enforcement experience, I have never seen a house (infested) to this extent. The house is unlivable for children, let alone any person,” Richardson stated. “The amount of cockroaches in the house has to be into the thousands and possibly hundreds of spiders inside the residence, feasting on the cockroaches. In one corner of the living room, there were cockroaches lined all the way from the floor to the ceiling, and spider webs. While Officer Burgoyne and myself were standing inside the residence, cockroaches were falling on our heads.”

A urine odor also permeated the house, according to the investigators. “The odor in the residence was so strong, it was burning my nose. It smelled of urine and there were pets inside the residence as well,” the officer added.

Police later located Young in another address, who stated that the landlord had recently “bug-bombed” the home in an effort to get rid of the cockroach infestation.

According to Nampa Police Department spokesman Gary Marang, the four children who were also living in the home –- girls ages one, three, four, and thirteen –- are now in the temporary care of Idaho Health and Welfare Department officials. It was not immediately clear how the children are related to the couple.

Bergener and Young were each charged with four misdemeanor counts of injury to a child and were booked into the Canyon County Jail. Both have pleaded not guilty.

Bergener is also incarcerated on a probation violation for a previous crime. His pre-trial conference is set for Sept 16, according to Canyon County spokesman Joe Decker.

A judge has ordered Young to not have any contact with the children. She has a pre-trial conference scheduled for October 28, Decker said.