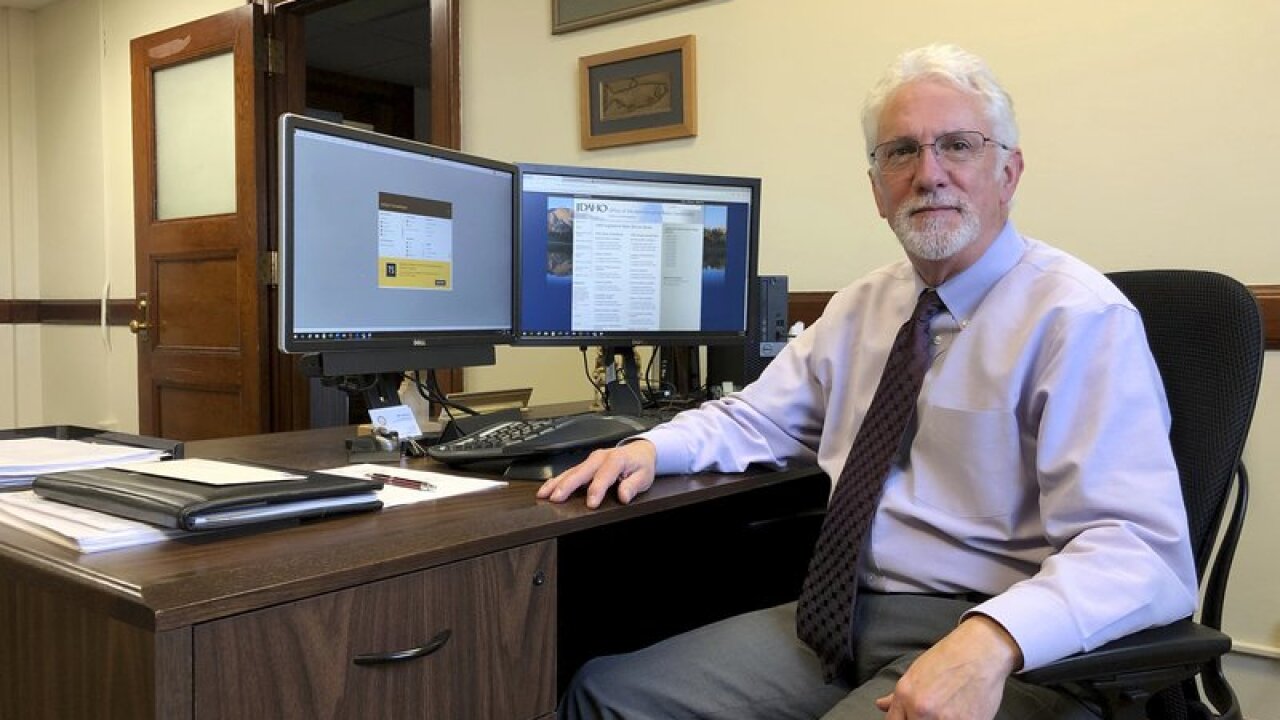 In this Friday, Jan. 10, 2020 photo Idaho Administrative Rules Coordinator Dennis Stevenson poses in his office in Boise. An animosity-tinged power struggle between the Idaho House and Senate has had big ramifications for Stevenson, who for three decades has toiled in an agency most people didn&#39;t know existed. (AP Photo/Keith Ridler)

BOISE, Idaho — A power struggle between the Idaho House and Senate turned out to have big ramifications for a relatively unknown state employee who has toiled for three decades in an agency most people didn’t know existed.

Administrative rules coordinator Dennis Stevenson is recognized as the state’s top expert on an arcane aspect of government — administrative rules. He was supposed to retire last July, but the governor’s office asked him to stay on to help Republican Gov. Brad Little cut down 8,200 pages of rules that touch on nearly every aspect of daily life, from consumer and environmental protections to hunting and fishing licenses.

Now, he’s in high demand to testify at the Statehouse as lawmakers try to understand changes and cuts that Little made over the summer.

The governor had sweeping authority without public or lawmaker oversight to make those cuts after the House and Senate in April got caught up in the power struggle and failed to pass a measure approving all the state’s administrative rules.

The House wants unilateral authority to kill administrative rules. The Senate refuses to give it to them. A compromise has yet to be reached.

The rules range from protections for homeowners and schoolchildren to licensing for health care professionals and construction contractors. They are mostly products of the state’s obscure but important rule-making process that involves public participation.

Little ended up cutting or simplifying 75% of those rules, boasting it’s made Idaho the least regulated state in the nation. Stevenson played a big part in that effort.

“Nobody knows the administrative rules process better than Dennis Stevenson,” said his boss, Alex Adams, administrator of the Idaho Division of Financial Management who’s also known as Little’s budget chief. “We wouldn’t have been able to do what we did with this governor had Dennis not been part of the team.”

Now, lawmakers want to hear from Stevenson on what it all means, particularly what substantive changes may have been made. Besides testifying before committees, he’s chatting with lawmakers and helping as best he can. But he said lawmakers also will have to read the rules, which can be thousands of pages.

Stevenson said he agreed to stay on past his retirement date after getting a retention bonus that included a cash payout and a bump in pay. According to the state employee pay database, he’s making just under $40 an hour, about $82,000 annually.

In many states, legislatures don’t approve administrative rules and they simply take effect. Legislatures that do approve them are supposed to look at the intent of the rule created by executive branch agencies and decide if they fall within the scope of the statute previously passed by lawmakers.

That doesn’t always happen with Idaho lawmakers, who instead apply their personal beliefs.

It happened Thursday when three House members voted against approving administrative rules establishing eligibility for Medicaid expansion, which is a state law approved by voters in a 2018 ballot initiative. A Senate committee unanimously approved the rules.

House members tend to vote outside of intent more often than senators, and that’s part of the reason the Senate is reluctant to give the House unilateral authority to kill rules.

Republican House Speaker Scott Bedke said representatives do go outside of intent when voting on rules.

“I think that’s true,” he said. “But if there’s room to interpret the law via rule, then that means that the law was broad enough to allow that to happen. And so the natural outgrowth of all of this I think will be tighter laws.”

“We’re trying to figure out a way to improve our process, and come a little closer to what the House would like,” he said. “But a lot of our members think (the existing process) has worked just fine.”

Whether lawmakers get it sorted out won’t be Stevenson’s concern after he retires on May 15. He said he’d like to take his wife to the Basque country of Spain where he spent time as a young man. But first are some long-delayed projects.

“Like every guy that retires, I’m probably going to paint my house,” he said.