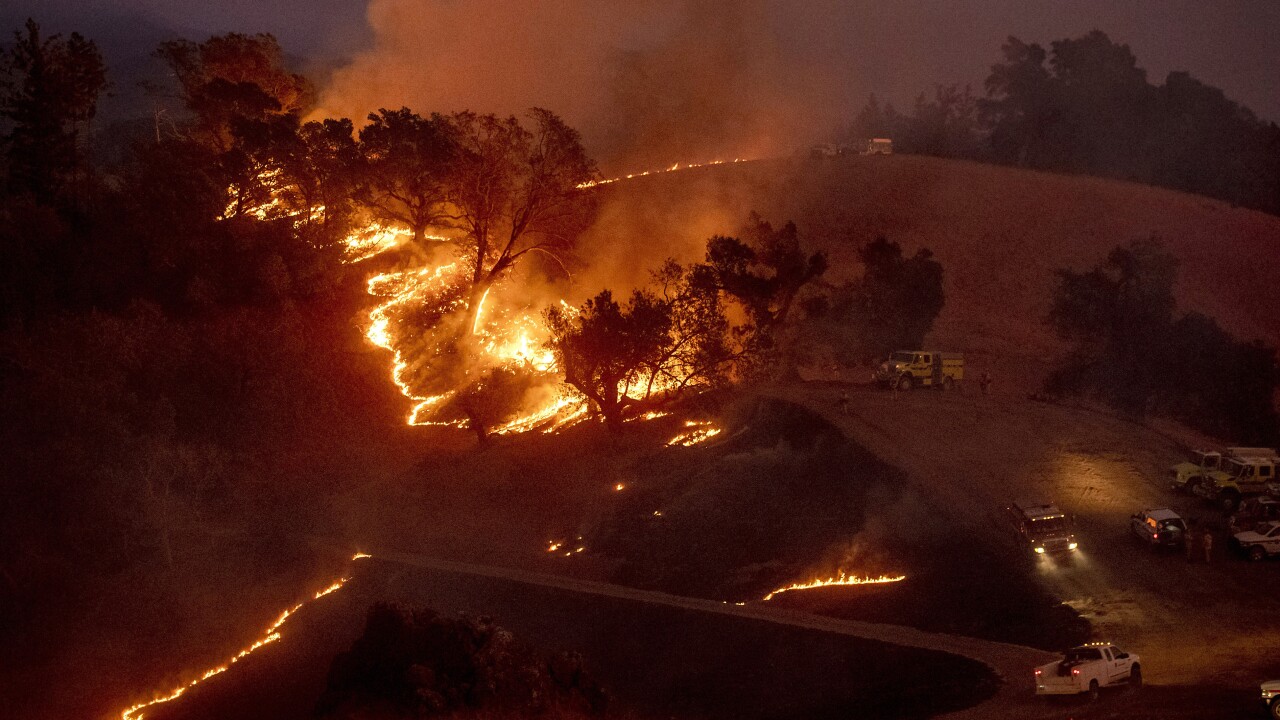 Flames from a backfire, lit by firefighters to slow the spread of the Kincade Fire, burn a hillside in unincorporated Sonoma County, Calif., near Geyservillle on Saturday, Oct. 26, 2019. Authorities are fighting a Northern California blaze that forced evacuation orders and warnings for nearly all of Sonoma County stretching to the coast, with forecasts of strong winds prompting officials to start cutting electricity for millions of people in an effort to prevent more fires. (AP Photo/Noah Berger)

BOISE, Idaho — Idaho fire crews and equipment have been sent to help the firefighting efforts in California.

Crews from southwest Idaho could also be sent, should California crews request additional help through the state’s mutual aid agreement.

Fueled by winds which at times have reached some 100 miles an hour, the massive Kincade Fire has thus far burned some 66,000 acres in Sonoma County, in California’s lush wine country, about seventy miles north of San Francisco.

During the night Sunday, firefighters made an aggressive effort against the blaze, fearing it would reach the town of Windsor. The community's 28,000 residents have been evacuated.

California Department of Forestry and Fire Protection Jonathan Cox said Monday that firefighters brought in what he called “significant resources” to fight the wildfire.

The fire started last week and has been fanned by extremely heavy winds. It has destroyed 96 buildings so far and threatens 80,000 structures in several wine country communities.

It was only five percent contained. Nearly 200,000 people remain under evacuation orders because of fire threat.

Meantime, fifteen wildfire strike teams from Oregon fire departments are also on the way to help battle the California wildfires.

In Southern California, Los Angeles Mayor Eric Garcetti says the wildfire in the city's western neighborhoods has scorched more than 600 acres, but its growth has slowed.

Garcetti says the evacuation area has been slightly reduced -- after stretching from the Brentwood area down to Pacific Coast Highway in the Pacific Palisades neighborhood area early Monday. The earlier evacuation orders affected 10,000 homes and businesses.

Homes have burned since the fire erupted around 1:30 a.m. and was swept by Santa Ana winds into canyons and ridgetop neighborhoods, but there's still no exact count of how many were destroyed.

Los Angeles Fire Chief Ralph Terrazas says his firefighters had to make tough choices about which homes could be saved.

Garcetti says the cause of the fire is under investigation.