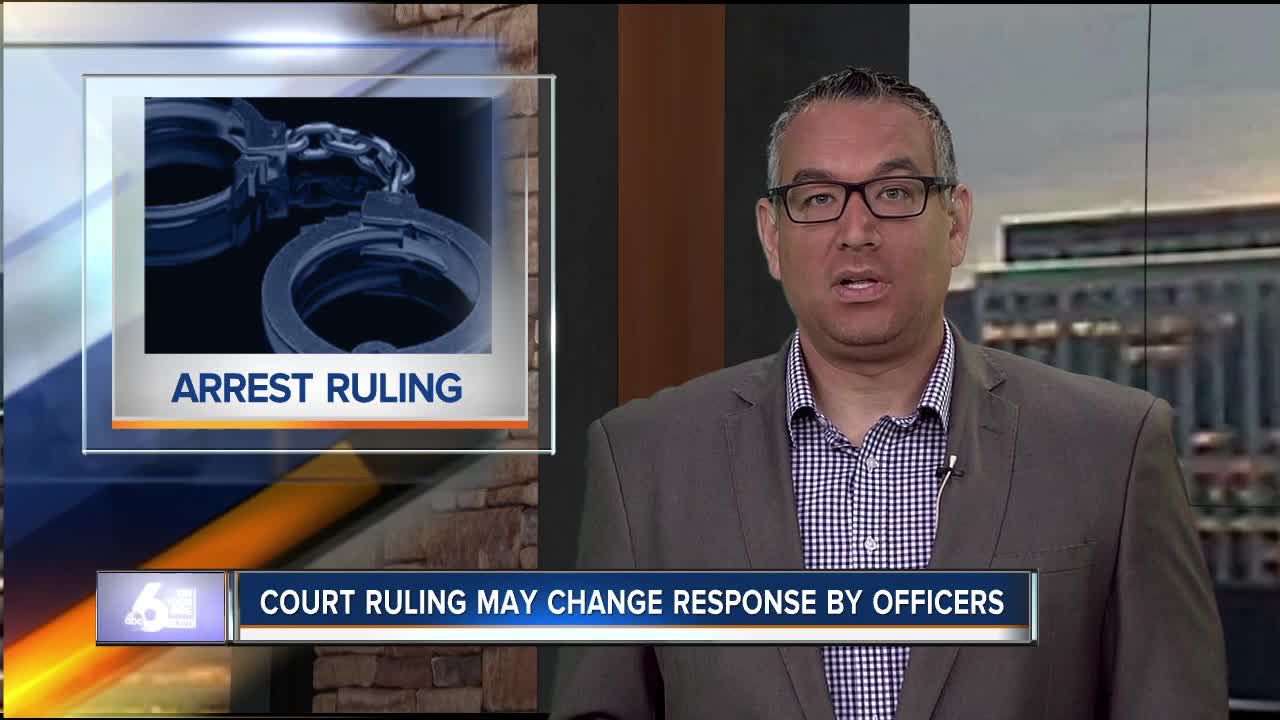 BOISE, Idaho — The Idaho Supreme Court says law enforcement officers can't arrest someone for a misdemeanor unless they have a warrant or actually saw the crime being committed.

The unanimous ruling made Wednesday has advocacy organizations scrambling because it likely means police will have to dramatically change how they respond to some domestic violence calls.

The ruling came in a drug conviction case in which the drugs were found after a man was arrested — without a warrant — on a misdemeanor battery charge for allegedly groping someone outside the sight of an officer.

The high court noted the Idaho Constitution's provision against unlawful search and seizure doesn't allow warrantless arrests without probable cause. That means no misdemeanor arrests unless the officer saw the crime — and without an arrest, the man's drugs wouldn't have been found. As a result, the court ordered that the man's drug conviction be overturned.

The implications of the case are broad. Patrick Orr, spokesman for the Ada County Sheriff's Office, said his agency is still working out what the ruling means and what changes the department will need to make in the future. Officers responding to domestic violence calls often arrest the person they suspect of committing the violence on a misdemeanor charge as a way of separating those involved and diffusing the situation.

Annie Pelletier Hightower, the director of law and policy with the Idaho Coalition Against Sexual and Domestic Violence, says the ruling makes it harder for law enforcement to create safety in many calls involving sexual battery, child abuse, stalking or other crimes that typically happen in a private location. The coalition works with several organizations and law enforcement agencies in an effort to address the root causes of violence in communities and improve the response to abuse.

"From about noon I started receiving kind of panicked calls and emails and that has continued for the last several hours," Hightower said Wednesday afternoon. "People aren't quite sure what to make of it, and there's a lot of fear and a lot of thought going into, 'What does this actually mean for our communities right now?'"

The ruling, written by Justice Joel Horton, noted that it wasn't until 1979 that Idaho lawmakers added a state law that allowed the warrantless arrest of someone if the officer reasonably believed that the person had committed a misdemeanor assault or battery outside the presence of the officer. But Horton said that law didn't meet the constitutional standard barring unlawful searches and seizures. He said that's especially important because when the Constitution was written, the common law of the land was that people couldn't be arrested for minor crimes without a warrant.

The same was true in many other states, Horton said, and prohibitions against misdemeanor warrantless arrests were even upheld in the U.S. Supreme Court in the early 1900s.

Horton said that history makes it clear the framers of Idaho's constitution understood that their wording prohibited warrantless arrests for completed misdemeanors.

"We are fully mindful of the significance of this conclusion," Horton wrote. "Idaho Code ... permits peace officers to use their arrest powers to intervene in domestic violence situations, even though they have not personally observed the commission of a crime, and to thereby defuse potentially violent circumstances."

Still, he wrote, the "extremely powerful policy considerations" that support allowing warrantless misdemeanor arrests "must yield to the requirements of the Idaho Constitution."

"We know there is this body of research that showing that the separation of individuals in the relationship reduces risk. If law enforcement doesn't have the opportunity to separate by arrest, then we're back into the situation where it is the person who has experienced abuse and who is in the most upheaval, likely with the fewest resources, forced to leave the home," she said. "As a community, how do we support those survivors leaving their homes?"

Hightower said she's checking with other states to see if any similar rulings have been made elsewhere, and how those states have dealt with any changes.

"Everyone is starting to explore policy options. I don't know if a constitutional amendment will be viable in this state or not, but there are also other solutions we can explore," she said.

For instance, some states have 24-hour online court access where domestic violence victims can seek protection orders at any time of day, not just when the courthouse is open.

"Realistically that would be a very big burden on the judiciary, which is already stressed," she said. "None of these are easy options."