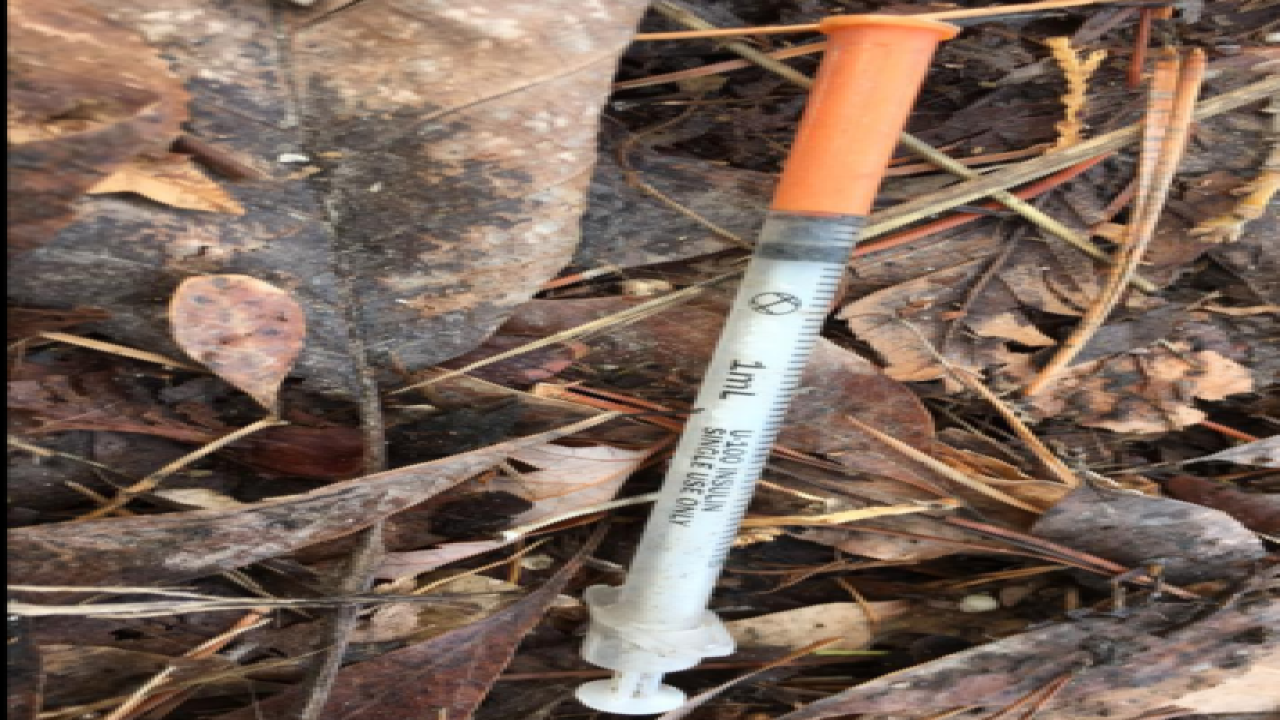 RATHDRUM, Idaho (AP) — Tired of seeing trash on the side of the road, Tonee Trzcinski decided to clean it up herself.

She felt increasingly horrified as she went along with her work.

“They’re everywhere. I can’t even believe it.”

Trzcinski, who has lived in North Idaho since 1984, is talking about a roughly 4-mile stretch of Atlas Road to the north and south of Highway 53. It’s a route she frequently travels, as many Rathdrum residents do.

She first began her Atlas garbage crusade three Mondays ago. In that short time, she’s found 31 hypodermic needles, identical to ones used to inject insulin.

Trzcinski said she was going to try to make roadside trash collection a fun family project, as she also has plans to help clean up Ramsey Road in that area, but the volume of needles has changed her mind.

“I’ve been a nurse for 19 years and I’ve never been afraid of needles, but I am now,” she said. “Now I have to go out and worry about needles in an uncontrolled environment.”

According to Coeur d’Alene Police Det. Mario Rios, this is a major problem in North Idaho.

“It is an epidemic. Unfortunately, hypodermic needles are used so much more than they used to be,” he said. “Our parks department and streets department are carrying around sharps containers. It’s just kind of a commonality.”

In parks. In parking lots.

“Any time somebody pulls over in a parking lot they can shoot up real quick and throw their needles out and off they go,” Rios said.

On hiking trails. On Tubbs Hill.

Rios encourages anyone who finds a needle to report it to law enforcement and stay at the location until the police have arrived to dispose of it.

“Definitely stay on scene so we can locate it, so we don’t have a scavenger hunt for needles,” he said.

Needles are dangerous, he said. Pets and other animals are at risk when needles aren’t disposed of properly.

But it’s children Trzcinski is most concerned about. On Saturday, she said she found three needles tossed onto a property where it was obvious kids reside. Trzcinski knocked on the door to alert the homeowner.

“She allowed me to go out there,” Trzcinski said. “There were three of them. They weren’t in the play area, but they were not far.”

Panhandle Health District public information officer Katherine Hoyer said PHD would not advise anyone to pick up needles that are not theirs, but if they do so to do it safely. The Food and Drug Administration has guidelines on how to properly dispose of sharps.

“Needles are used for various medical needs. However, we are seeing an increasing rate of IV drug use,” Hoyer said. “Another health concern with needles is that Hepatitis C and HIV can be transferred when needles are shared, which is also one of the reasons why we would not advise anyone to pick up a needle that is not theirs.”

She said a needle exchange program is available in Spokane, where a person can dispose of used needles and receive clean ones.

Syringes are commonly found along I-90, according to Nick Primmer, Idaho Transportation Department transportation technician in operations. Although crews don’t remove trash every day, he said their operations crews could probably find them every day if they wanted to. The crews also commonly find them behind the guardrail and on Potlatch Hill east of the Sherman Avenue exit.

The stretch of road where Trzcinski has been finding them is patrolled by the Kootenai County Sheriff’s Office. KCSO spokesman Det. Dennis Stinebaugh said it’s a frustrating situation.

“As our population increases, we are seeing more and more increased usage of drugs,” he said.

But, he said, “Not all needles are from drug users. We need to remember that.”

“Most insulin-dependent people are responsible with their equipment,” he said. “Who knows who’s dumping the needles unless you have the needles tested for the content.”

Testing takes a lot of time and resources, and it gets even more complex to try to arrest someone for a crime unless there are witnesses.

“We can assume that it’s illegal drugs — that’s mostly what we find,” he said. “Nobody wants to use the needles and still have it with the residue when they get caught, so they just chuck it out the door...

“Just like beer cans, you can find them everywhere.”