Heartbreak for Homedale: Trojans lose in overtime to Sugar-Salem 34-28 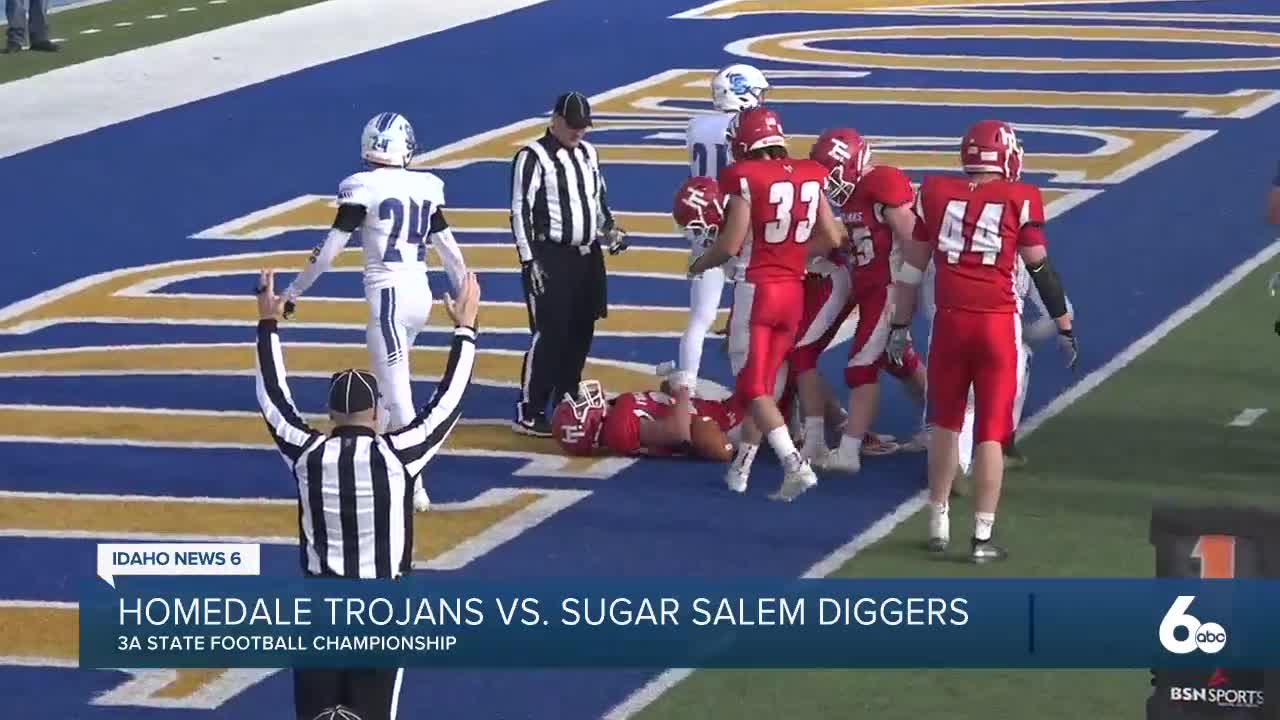 MIDDLETON, Idaho — The last two years Homedale and Sugar-Salem have met in the 3A state championship, and both times Sugar-Salem came away the winner.

The Trojans and the Diggers played in their third straight state championship, and it was a game to remember.

The Homedale Trojans jumped out to a 20-0 lead, but then Sugar-Salem scored 21 unanswered.

A touchdown run in the 4th quarter by Hayden Kincheloe and a two-point conversion gave the Trojans back the lead 28-20.

After turnovers by both teams, Sugar-Salem scored with 3:25 left in the game to tie it up, and the game went into overtime.

On the first play of overtime Crew Clark caught a ten-yard touchdown pass, but Sugar-Salem missed the extra point and then it was Homedale's turn.

The Trojans faced 4th and goal from the four, quarterback Jaxon Dines rolled out and tossed one to the corner, but Keagan Christensen couldn't hold on, Sugar-Salem won their third straight 3A state championship.

"Losing is not easy, but three years in a row is tough," said Homedale coach Matt Houltry. "These kids have battled all year, and man, they deserved it, they worked so hard for it when a lot of people counted them out, and I couldn't be more proud of them."

It was a heartbreaking emotional loss for Homedale, but the kids played their hearts out in a game where it was a shame that one team had to lose.

"The hard work, the dedication, the sacrifice, the commitment and the teamwork, the things that they learned while they were playing this game are the most important things they can take from this," said Houltry. "I hope that is what they focus on."

Congratulations to Sugar-Salem on winning the state championship, but also for their sportsmanship after such a hard-fought game, it was an excellent Idaho high school football game.

"Both programs are very good, we knew it was going to be a tough game coming in, and we kind of expected the person with the ball last to win," said Will Pryor a Homedale parent. "It's just a little disappointing to come up a little short, very proud of the team and our excellent coaching staff."