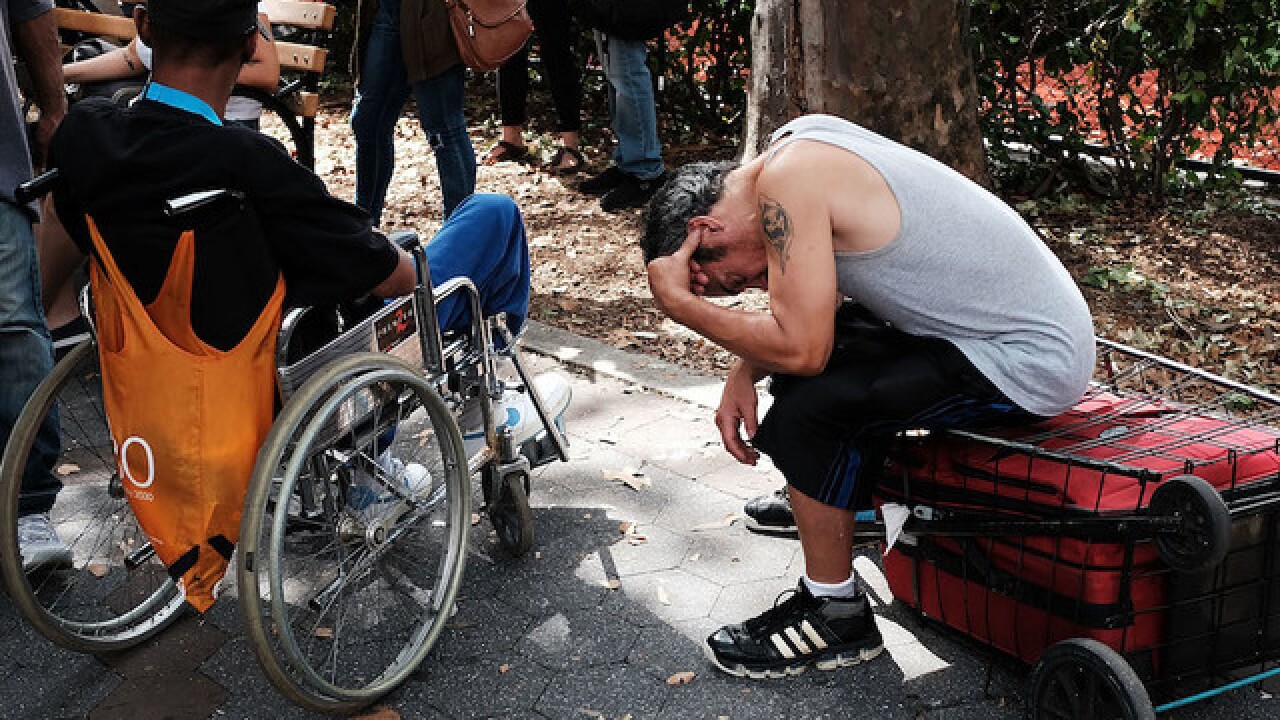 Copyright Getty Images
Spencer Platt
<p>\ Heroin users wait to be interviewed by John Jay College students of Criminal Justice as part of a project to interview Bronx drug users in order to compile data about overdoses on August 8, 2017 in New York City. The Bronx was the borough with the highest number of overdose deaths in 2016 with 308 residents. The students interview their subjects in a park and ask questions about their history of drug use and if they have overdosed.The subjects receive a small financial compensation for the research.</p>

The President's opioid commission on Wednesday recommended nationwide drug courts to help place substance abusers into treatment rather than sending them into the prison system.

That sweeping change was one of the boldest of the 56 recommendations made by the panel, headed by New Jersey Gov. Chris Christie.

"It's an ambitious recommendation but one that we think ... would be a twofold benefit to the justice system: One, to get help to people who need it in order to slow down recidivism, and secondly, it will lower the federal prison population," Christie said in unveiling the commission's final 131-page report .

The report comes six days after President Donald Trump declared the opioid crisis a public health emergency, a move that allows for money to be redirected to fight the epidemic and for state laws to be eased.

Last year alone, more than 64,000 Americans died of a drug overdose, primarily due to opioids. That translates into 175 people a day.

"It is time to liberate our communities from this scourge of drug addiction," Trump said in declaring the public health emergency. "We can be the generation that ends the opioid epidemic. We can do it."

In its report Wednesday, the commission said it would like drug courts in each of the nation's 93 federal judicial districts. As of 2015, fewer than a third of federal districts operated drug courts. The commission also recommended expanding the availability of medication-assisted therapies, increasing treatment capacity for those who need help and making the lifesaving opioid overdose antidote naloxone available to more first responders.

In addition, the panel called for better fentanyl detection technologies, to stop the deadly synthetic opioid from entering the country. Tougher federal penalties for the trafficking of fentanyl are needed too, the commission advised.

The commission also recommended increased electronic prescribing to better track prescribing records, as well as integrating that data with electronic health records along with overdose data to help target patients at higher risk for substance use disorders.

Dr. Andrew Kolodny , executive director of the nonprofit Physicians for Responsible Opioid Prescribing, said that many of the recommendations were robust, particularly the idea of requiring informed consent from patients to use opioids. "If prescribers have to get patients to sign a consent form, you will see a dramatic decrease in the casual prescribing," he said.

The question now becomes how to pay for the new initiatives and whether Congress will act.

"The overall problem here is, we've got a commission making recommendations when we need an administration putting out a plan and seeking out appropriations," Kolodny said. "We need action."

In his letter to Trump, Christie said it was not the commission's job to put a dollar figure on what is needed. That onus is on lawmakers, he said. "We urge Congress to do their constitutionally delegated duty and appropriate sufficient funds (as soon as possible) to implement the Commission's recommendations," Christie wrote.

Baltimore City Health Commissioner Dr. Leana Wen applauded the commission's efforts but said it "does not go nearly far enough." Most important, Wen said, without new federal funds freed up, thousands of Americans would still not be able to get much-needed treatment.

"The president needs to announce a specific dollar amount for new funding, not repurposed dollars that take away from other key health priorities," Wen said in a written statement. "Rhetoric alone is not enough."

Dr. Mitchell Rosenthal, founder of the Phoenix House substance abuse treatment organization, also expressed skepticism about the lack of new funds. "The White House commission on the opioid crisis has outlined many strong recommendations to combat this epidemic, but what's missing is money -- a lot more money to actually implement these proposals," he said.

And that money needs to come from Congress, said Michael Fraser, executive director of the Association of State and Territorial Health Officials . "They have a year-end budget they need to finish; I think there's an opportunity to get that done. But December 8 is coming, and that's the target date. Is this more important than tax reform? I think so, but I'm not doing the calendar," he said.

Christie urged Congress and the President to use "block grant" federal funding to "allow more resources to be spent on administering life-saving programs." That would cut through layers of red tape and help make sure money is not being wasted, he said.

"One of the most important recommendations in this final report is getting federal funding support more quickly and effectively to state governments," Christie wrote. "Bureaucracy, departmental silos and red tape must not be accepted as the norm when dealing with funding to combat this epidemic."

The commission was formed in March to explore best approaches and make recommendations on how to curb the growing epidemic. In the months that followed, the commission met with families who've lost loved ones to opioids and met with top health officials and substance abuse experts across the country.