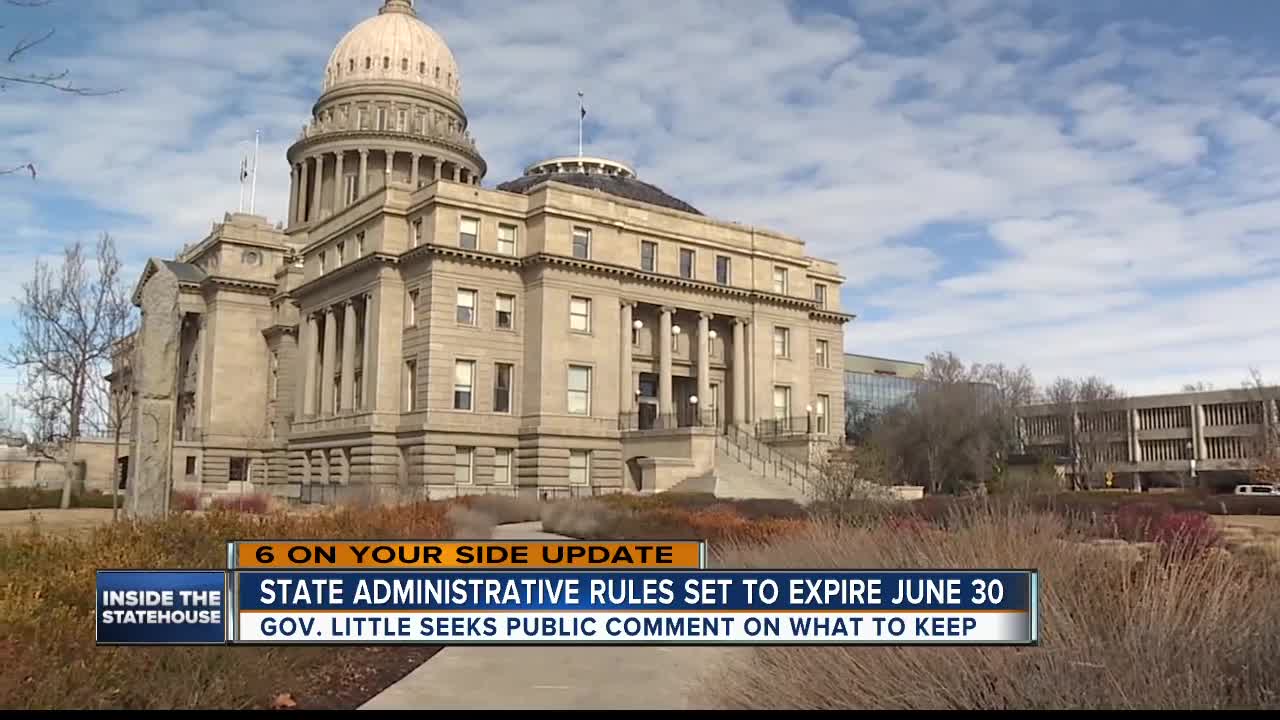 BOISE, Ida. — Governor Brad Little is seeking public comment now on administrative rules identified for elimination or simplification after the Idaho Legislature's decision not to reauthorize Idaho's Administrative Code during the 2019 legislative session.

The Idaho Administrative Code has the full force of law. At the beginning of the year, it included 736 chapters, 8,278 pages of regulations and at least 72,000 total restrictions. In the past, state legislators reauthorized all existing rules at the end of the legislative session but did not do so this year. Governor Little then directed his administration to exercise executive authority to ensure rules necessary to protect the public remain in effect after July 1, 2019.

Governor Little’s administration used the unique opportunity to identify rules that are outdated and irrelevant for expiration on July 1, 2019. Executive branch agencies hosted more than 40 public meetings to review rules and identify rules to eliminate.

Agencies had already been comprehensively reviewing the rules they administer to identify areas where rules could be streamlined, scaled back, or eliminated as part of carrying out the Red Tape Reduction Act and the Licensing Freedom Act of 2019. Both acts resulted from executive orders Governor Little issued within his first few months in office to reduce regulatory burdens on Idaho citizens and businesses.

A list of all rules and their proposed status is posted on the Division of Financial Management (DFM) web site. You can view them here. Idahoans may submit public comments about the rules proposed for expiration by e-mailing RulesReview@dfm.idaho.gov by 5 p.m. MST on June 11.

Governor Little ultimately will make the decision whether to let a rule expire, weighing the public input received before June 11 in his decision.

“This effort is transforming Idaho’s Administrative Code into a set of regulations that are simpler and more user-friendly for the public. I want to thank my agency directors and their staff for fast-tracking the rules review process that I started with my executive orders earlier this year,” Governor Little said. “Identifying one-third of rule chapters to cut or simplify in four weeks is no small feat, and the hard work within my administration helps to improve transparency and invigorates public confidence in state government.”

Rules deemed necessary to protect the public will be reauthorized. Agencies will re-publish the rules as “temporary and proposed rules” concurrently in a special edition of the Idaho Administrative Bulletin in June 2019. Agencies will accept written comments and host public hearings on rules to be reauthorized, in accordance with state law.

All rules reauthorized through this process are subject to legislative review during the 2020 legislative session. Any new rules or significant modifications to existing rules must go through the normal rule-making process, which traditionally involves a months-long process of negotiated, proposed, and pending rule stages with specific requirements for public comment.