Going to BSU's home opener? Some advice from Boise Police 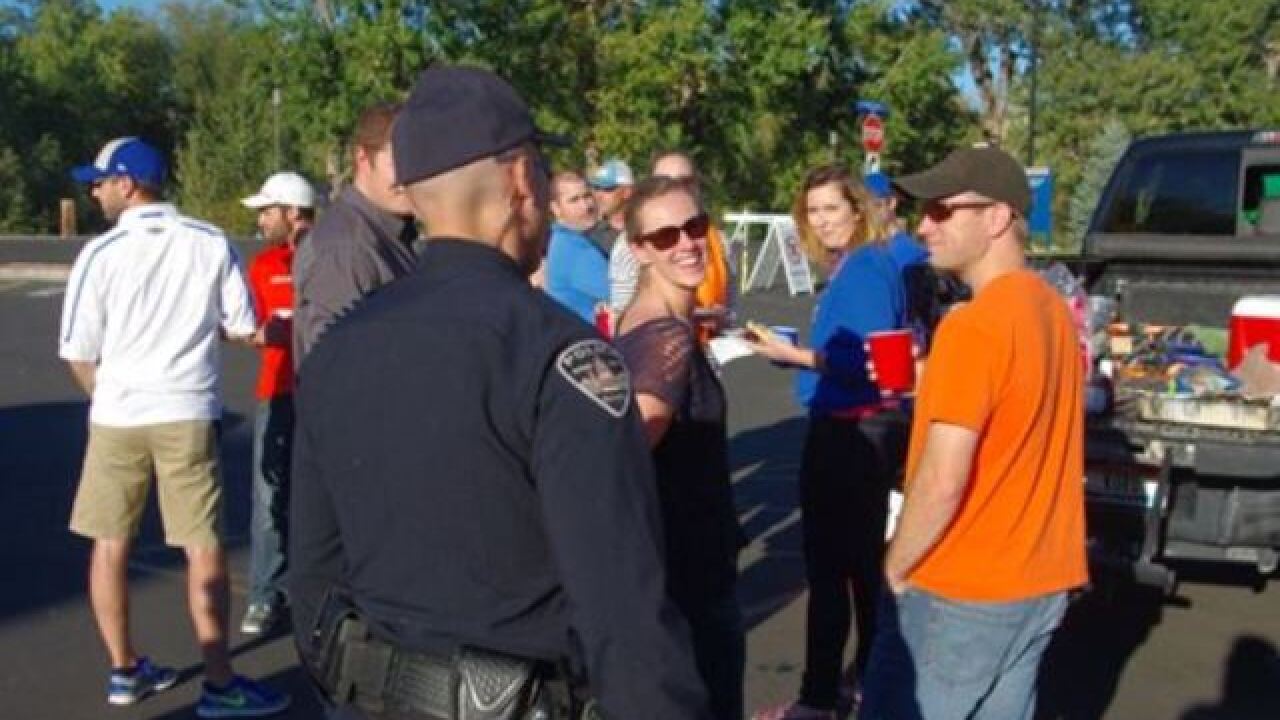 Copyright 2018 Scripps Media, Inc. All rights reserved. This material may not be published, broadcast, rewritten, or redistributed.
Boise Police Dept.

The Boise State Broncos are back on “The Blue” in their home opener to take on the Huskies of Connecticut this Saturday evening at 8:15 p.m. -- and Boise Police officers want to remind fans who are going to the game, or enjoying the atmosphere outside the stadium, to remember:

•Do not drink and drive.
•Park safely and legally. Those who ignore parking laws and/or signs jeopardize safety and risk getting a ticket or being towed.
•If fans are going to drink alcohol, do so in designated areas. The 10 to 10 Zone remains in effect for home games.
•Open containers of alcohol are not allowed in public areas outside the 10 to 10 Zone, including parking lots and neighborhood streets. Officers are checking for adults who provide alcohol to minors and for underage drinking.
•Be good neighbors -- use crosswalks, throw away litter and respect the safety and cleanliness of homes and businesses in the BSU area.

Boise Police officers say they will be checking for illegal alcohol use in the campus area -- with emphasis on the neighborhoods just south of campus where problems continue to be reported by neighbors and businesses of people on the streets, in the parks, and in parking lots engaging in illegal activities. In the past, these activities have included alcohol use, disorderly conduct, underage drinking, drunk driving, assaults, urinating in public, loud parties, and littering, according to a Boise Police Department news release.

10 to 10 Zone boundaries are specific. No "gray area" exists outside the identified boundaries and illegal alcohol use outside those boundaries will be enforced, the release said.

It is a violation of city code to have open containers of alcohol on public streets and sidewalks, city parks without a parks department permission, and within 250 feet of the Boise River. This includes private parking lots open to the public (private parking lots with catering permits are the exception).

Those carrying open containers of alcohol on city streets, sidewalks, city parks, or parking lots risk getting a citation. Illegally possessing an open container of alcohol or urinating in public is a misdemeanor that requires a court appearance with a possible penalty of a fine up to $1,000 or 6 months in jail.

Minors found in possession of alcohol risk a driver’s license suspension and/or a fine.

A person who sells or furnishes alcohol to an underage youth will face fines between $500 and $1,000 plus up to one year in jail.

The Downtown Boise Association has coordinated free shuttle buses from several downtown locations to Albertson’s Stadium. The Bronco Gameday Shuttle runs every fifteen minutes for two hours prior to game time, and immediately after the game for one hour.

To preserve neighborhood and public safety, officers will be watching for parked vehicles that pose a safety hazard -- such as those parked blocking sidewalks, crosswalks, and fire hydrants, or vehicles parked too close to intersections or stop signs.

Both Idaho State and Boise City codes prohibit hazardous parking
•Within 30 feet of a stop sign or yield sign;
•Within 20 feet of a crosswalk-marked or unmarked-at an intersection;
•Within 15 feet of a fire hydrant;
•On a sidewalk;
•On a yellow or red "no parking" curb.

These laws apply to all motor vehicles, including motorcycles and scooters.

Most parking tickets carry a fine of approximately $47.

Drivers risk their vehicle being towed if the vehicle is parked blocking a driveway, access way, fire hydrant, or parked illegally in an alleyway, police said.

Parking for Boise State home games is free on a first come, first served basis. Free parking is available at each park until 3 a.m. for home games only.

Towing will be delayed at Julia Davis Park, Ann Morrison Park, Riverside Park and Kristin Armstrong Municipal Park until 3 a.m. the following morning regardless of the game’s kickoff time.

Glass beverage containers are prohibited in all City of Boise parks. Any other glass must be removed from the park by visitors and can’t be deposited in the trash.

Alcohol consumption is allowed inside the 10 to 10 zone within Julia Davis Park, but alcohol policies vary at other park locations including Ann Morrison Park and Kristin Armstrong Municipal Park, officers said.

Limited reservation sites are also available for a fee and, in some cases, a permit is needed for alcohol consumption at reserved shelter.

Boise State football fans also have the option of parking at the Ada County Courthouse/Civic Plaza complex for all Boise State home football games this season.

Parking is offered at just five dollars per vehicle for home games. Approximately 500 parking spaces are available, and parking will open at least 3 hours before kickoff.

Parking proceeds will benefit the operations of the Ada County’s FACES of Hope Victim Center which provides a safety net of services for victims of child abuse, domestic violence, elder abuse and sexual assault.

Signs posted on the north and south sides of University Drive restrict parking between 2:00 a.m. and 5:00 a.m. Violation of the parking restrictions is a minimum $40 fine. In some areas, signage clearly indicates that violating vehicles will be towed.