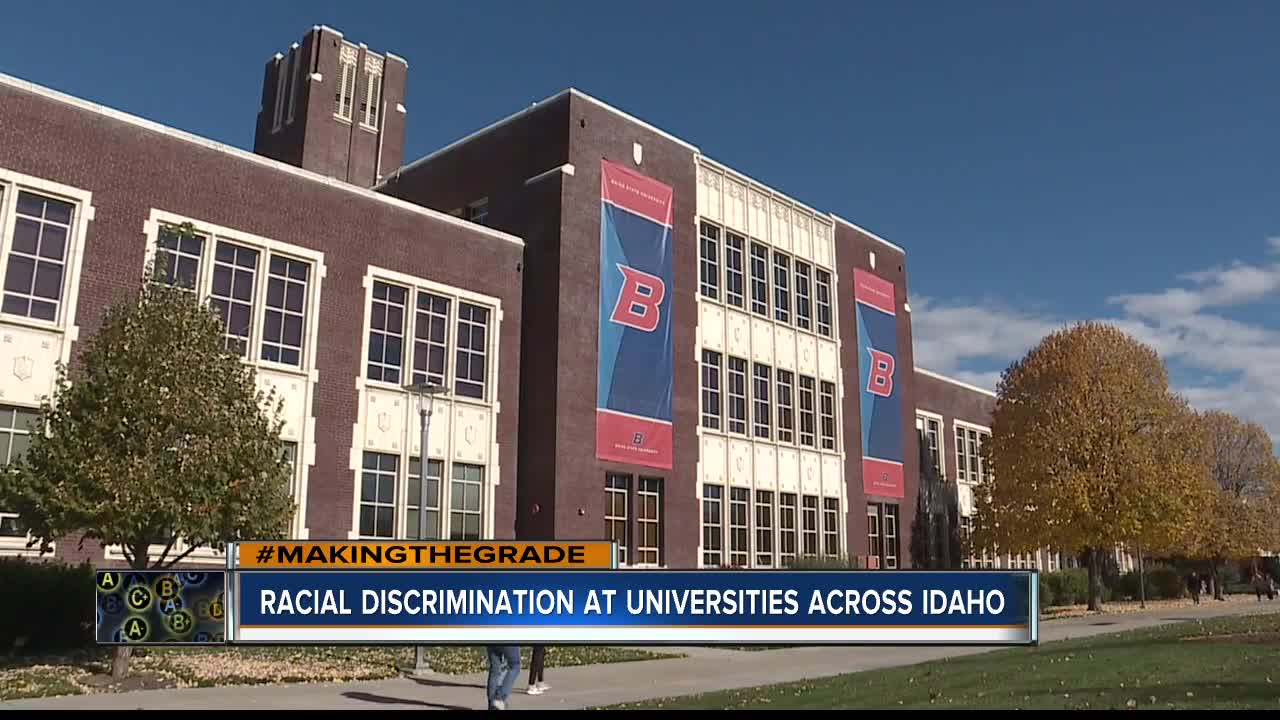 BOISE — Racial discrimination is an issue on college campuses across the nation. Nearly 1,100 hate crimes at schools were reported to the U.S. Department of Education in 2017, but the real number of incidents of racism is likely much higher.

Now after several incidents of alleged on-campus racism at Boise State University, students are calling on administration to do more to put an end to racism on campus.

Ximena Bustillo, with Boise State’s independent student newspaper, The Arbiter, dove into this firsthand, and found students were concerned with the lack of concern from housing officials.

From the “n-word” written on multiple dorm room doors across campus, to swastikas and notes with a call for death to anyone who isn't white, some campus residents and staff are questioning Boise State's commitment to diversity and inclusion.

These students are making sure racist incidents no longer fly under the radar at Boise State. A freshman at the university, Sunday Thabach, said, "I don't really feel comfortable being at Boise State." And Dele Ogunrinola, another Resident Assistant and Student feels he has been the direct target of racial discrimination on campus: "They came to my floor and they wrote explicitly racist messages specifically targeted towards people of color--specifically black people."

Boise State students of all races are speaking up after an incident last November in Keiser Hall, an on-campus housing complex. Students and administration said notes were found on the fourth floor near the hall's "positivi-tree,” which was a decoration meant to boost spirits during finals week. The notes, however, were anything but uplifting.

When these incidents happen, many students say they’re brushed off by administration, "I was just kind of told to erase it. Just like what happened when the hate notes were found in Keiser--they were told to throw them away. Just like what happened in Towers; they were told to erase the board that had a racial slur. This is consistent behavior by housing," said Jones.

Boise State does have a protocol when it comes to situations like this, including calling campus security, reporting to university compliance, and notifying leadership. They also file reports with law enforcement. However, students say that protocol isn’t always followed with repercussions for perpetrators. "My resident director found these notes and he called Boise Police Department and Boise Police Department told them that it wasn't a hate crime because [it is] free speech," said Ogunrinola.

We verified that with Boise Police, and they said that statement is correct. They also said Boise State Security led this investigation, and the reason BPD did not classify this incident as a hate crime is because the key words from an investigation that are needed to charge a person for a hate crime are "specific intent,” meaning specific intent to intimidate or harass based on a person's identity. According to Boise Police, Boise State Security did not include those two words when communicating with police.

So if police can't take action, how does Boise State assure students they're handling the situation? Karla Magana said the issues are being addressed by emails, and according to Thabach, other students confirmed that "an email's sent out saying 'oh, there's an investigation going on,' or 'oh, we're looking into it,' but that's it."

Ultimately, students are left dissatisfied and fed up with racial discrimination just being swept under the rug. In The Aribter's reporting, they found students felt a lack of support for marginalized populations at Boise State. Carter Jones said, "it was a call for action. If a single person is not enjoying their experience here at Boise State, change needs to occur."

The Director of Housing said he appreciates how the article illuminated the work Boise State still has left to do, which he says is their top priority. And many students agree their protocol needs a revamp. "Boise State, I don't think, has an adequate protocol when things like this happen cause, like, even I'm kind of puzzled," said Aysia Kernin, Resident Assistant and student.

Other Idaho schools will tell you that training for Resident Assistants is essential.

Northwest Nazarene University in Nampa say their RAs are at the forefront of how to handle racially charged confrontations.

We also asked The College of Idaho whether racial discrimination had ever been a problem on their campus. They say every school has experienced similar incidents and, if they say they don't, they're fooling themselves. "Our RAs work with our residents through these one-on-one meetings that happen throughout the course of the year and we call them summits," said Paul Bennion, Vice President of Student Affairs and Dean of Students at The College of Idaho.

In Moscow, at the University of Idaho, they say peer-on-peer racial discrimination, while rare, happens there as well, and an important part of their protocol is their Vandal Care online reporting system. They also require 24 hours worth of training for Resident Assistants.

Boise State's Director of Housing said the department is currently holding discussions with student and staff teams to identify ways to support students with marginalized identities and plans to implement training for housing staff. And Boise State administrators also say these are not their only action items, but that they are a start as they continue to develop a strategic plan to deliver a better residential experience.