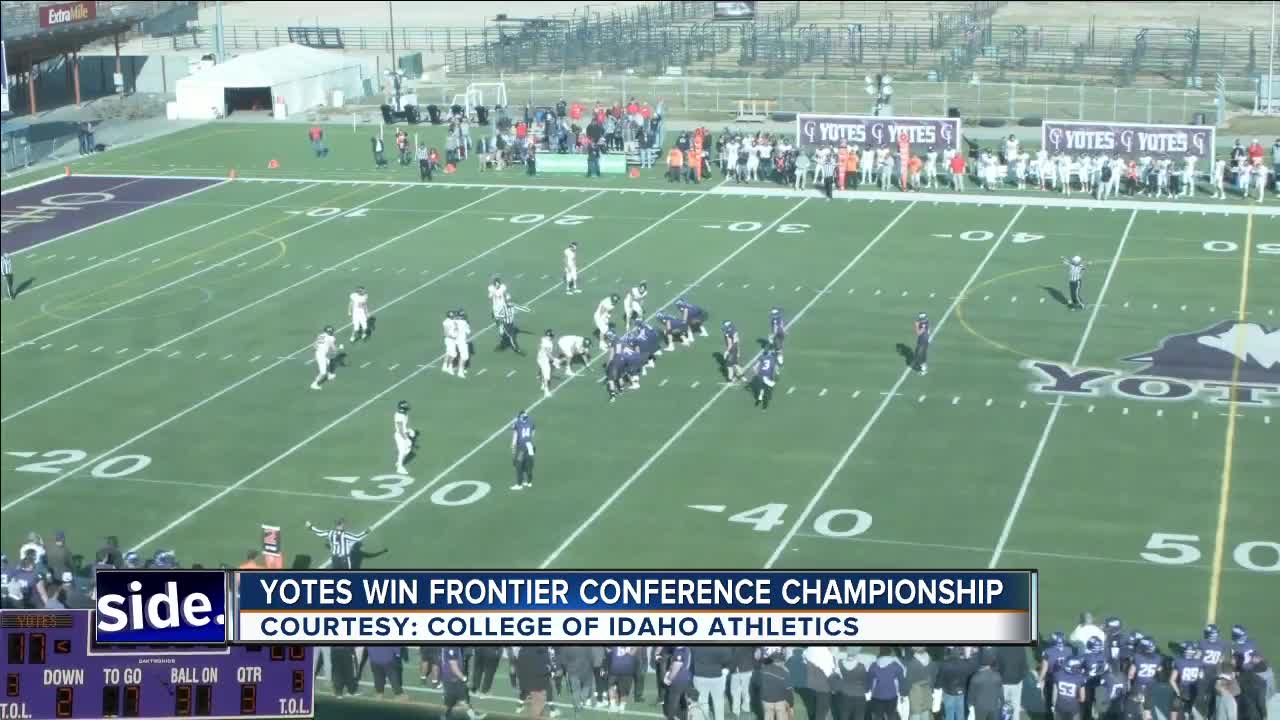 CALDWELL, Idaho — The College of Idaho Yotes clinched their first postseason berth in 66 years, using a stifling second half defensive performance to rally past Montana Western, 38-27, before 3,517 fans at Simplot Stadium.

The No. 6-ranked Coyotes extended their win streak to 15 games, clinching their first-ever Frontier Conference championship and the league’s bid into the NAIA Football Championship Series. C of I last competed in the postseason in the 1953 Refrigerator Bowl, losing to Sam Houston State, 14-12.

C of I spotted the No. 24-ranked Bulldogs (6-3, 6-3) a 20-7 second quarter lead – as Western used a pair of interceptions and a long punt return to set up short scoring drives. Trailing 20-10 at the break, the Yotes flipped the script.

Canyon Olson forced a fumble on a Western punt return, with Dylan Martinez recovering the ball on the Bulldogs 22-yard-line. Three plays later, Nick Calzaretta broken through the line on an 11-yard touchdown run to cut the margin to three. A Jordan Nero interception thwarted a Western drive deep in C of I territory, with the Yotes regaining the lead following an 85-yard march. Darius-James Peterson went 4-for-4 on the drive, capped by a 31-yard touchdown strike to Hunter Juarez.

Following the kickoff, Jon Jund was intercepted by the Yotes Josh Elsberry, who returned the ball 26 yards to the end zone to add to the lead. The defense did the rest – sacking Jund four times in the second half and stopping the signal caller on a 4th-and-goal chance at the 5-yard-line late in the game. C of I put the game away on the resulting drive, going 95-yards in eight plays, with the back-breaker a 69-yard touchdown run from Justin Hellyer.

Calzaretta opened the scoring on a 7-yard first quarter run, as C of I marched 84 yards on their first possession – but Western dominated the rest of the half, as Payton Pinz and Mitch Orme had interceptions, with both Sean Miller and J.D. Ferris scoring on short touchdown runs. Mark Kharchenko added field goals of 19 and 24-yards to give the visitors the two-score lead.

Peterson ended the day 14-of-30 for 200 yards and added 30 rushing yards, with Hellyer rushing for 97 yards and Calzaretta pushing past the 1,000-yard mark for the season with an 18-carry, 82-yard afternoon. Juarez became the first Coyote in program history to record 3-straight 100-yard receiving games, catching six balls for 100 yards.

Jund was 21-of-34 for 306 yards and a late touchdown to Blake Sentman, but was sacked five times. Nate Simkins caught seven passes for 115 yards, with Kyler Prante rushing 16 times for 58 yards – but Western was limited to just 73 rushing yards by the C of I defense.

The Yotes close out their regular season Saturday, November 16, hosting Montana State-Northern at noon. You can keep up with everything Yotes athletics on social media: Facebook, Twitter, and Instagram.