UPDATE: Terminally ill Eagle girl has passed away before her Christmas celebration 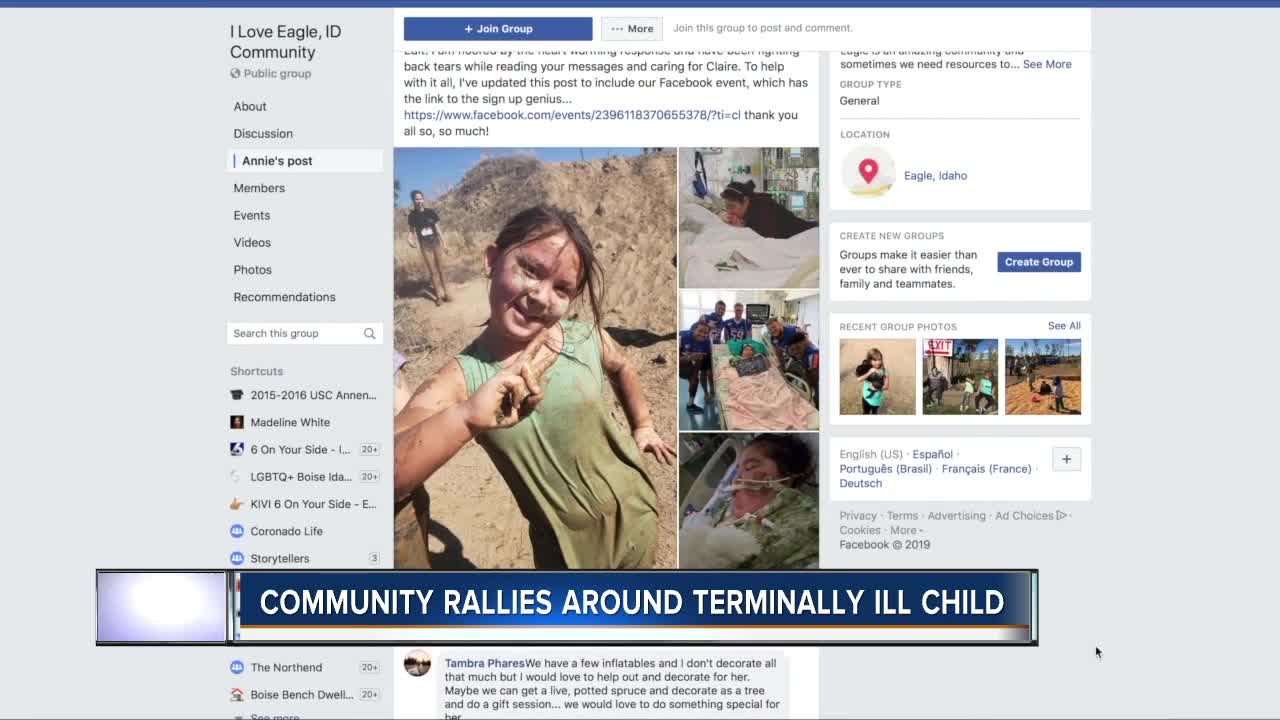 The Treasure Valley community has been rallying around an Eagle mother and her daughter, Claire. The 9-year-old is suffering from a rare type of brain cancer and her prognosis is dire.

Claire passed away in her sleep this morning.

Her funeral information is as follows:
.
The Church of Jesus Christ of Latter-day Saints
2090 N. Eagle Rd, Eagle, ID 83616
.
Saturday, October 19
Visitation at 9:30 - 10:30AM
Funeral services begin at 11AM
.
Celebration of Life/Claire's Early Christmas
November 2nd, details to follow

According to the "Bringing Christmas to Claire" Facebook page, neighbors of terminally ill 9-year-old Claire Elliott will gather to decorate the homes in her subdivision this Saturday, Oct. 19 at 7 p.m. at Hogan Street in Eagle.

The community is invited to join.

"With the change in plans we will be decorating Claire's neighborhood," said Rachel Masonheimer in a Facebook post. "The Eagle Point subdivision has cleared us to deck the halls!... Volunteers needed to help set up!"

She also added that they are especially looking for people to bring blow-up decor and yard decor.

Masonheimer would like to reiterate that she set up an account at Idaho Central Credit Uniion named "Sunshine for Claire's Family," if you would like to donate.

As Annie, Claire's mother, originally mentioned in her Facebook post that started it all, Claire's favorite holiday is Christmas. "I'm wondering if there would be neighbors willing to put up Christmas decorations and bring a little Christmas cheer early?" she asked.

Updated dates and times were announced Friday for the early Christmas for Claire event.

According to the Elliotts' neighbor Rachel Masonheimer on the Facebook page, everyone is invited to join Claire's neighbors and schoolmates in a Christmas caroling session for Claire at 7 p.m. on Friday, October 11, on Hogan Street in Eagle.

In addition, with the change in plans, Masonheimer said they will be decorating Claire's neighborhood on October 19. She said the Eagle Point subdivision cleared them to "deck the halls." Volunteers are needed to help set up.

According to Rachel Masonheimer, a neighbor of Claire and Annie Elliott, who was helping organize the November 2 event, "the 2nd is no longer an option."

"We aren't actually going to make it until the second, so we're going to have to move this event up ASAP... we're thinking about doing it on just a smaller scale out in front of her house," said Masonheimer.

It has yet to be announced when the event will be hosted, but still, Masonheimer hopes the community will remain involved.

"If you still want to be part of celebrating Christmas for Claire, we would love to have you," Masonheimer said.

6 On Your Side will keep you updated with the details of the moved event date as soon as it is announced.
___________
ORIGINAL STORY:

The Treasure Valley community has been rallying around an Eagle mother and her daughter, Claire.

9-year-old Claire Elliott, despite her young age, has spent the last year fighting for her life due to a rare brain tumor on her brain stem. Doctors told her about 11 months ago that she only had about ten months left to live.

She is now living past that prognosis. But her mom Annie says she has noticed Claire's health declining recently.

"She's having a lot more pain than she used to," said Annie Elliott, Claire's mom.

Claire's favorite holiday is Christmas. That's when Annie came up with an idea: she posted on Facebook, saying, "I'm wondering if there would be neighbors willing to put up Christmas decorations and bring a little Christmas cheer early?"

The community's response, she says, floored her.

"When I stopped counting, I had over 800 direct messages from people all over the community saying, 'Can we send a Christmas card? We can we bake goods!' Ya know, 'We have really cute Boston Terriers that would love to come visit Claire!'" she said, with a laugh.

Elliott said she was brought to tears by all the support she received.

"I am speechless still. I am so thankful," said Elliott.

She harnessed that demand into a Facebook event for a November 2 Early Christmas celebration for Claire. That's when their neighbor, Rachel Masonheimer, took the reins.

"I went down to [Idaho Central Credit Union] and opened up a bank account for them, which is under, 'Sunshine for Claire's Family,'" said Masonheimer. She hopes people will donate directly to this account so that they can avoid percentage fees that sites like GoFundMe take. If you're interested in donating to her family's account, call Idaho Central Credit Union at (208) 846-7000.

In the meantime, Elliott says they are treating everyday like a gift.

"There has to be like some bigger meaning, that I just don't understand. And maybe this is it. Maybe Claire being sick and bringing the community together and bringing, like, the Christmas spirit early to the Treasure Valley-- maybe this is part of her journey," said Elliott.

The early Christmas event for Claire is scheduled for November 2 from 6 p.m. to 9 p.m. at Reid Merrill Park in Eagle. Masonheimer said they are looking for people to reserve spaces (12 foot by 12 foot) in the park to decorate and provide Christmas cheer; you can reserve one of those spots by emailing christmasforclaire@gmail.com.

If you'd like to help support Claire's early Christmas, you can mail gifts to Claire Elliott:

She also has an Amazon wishlist set up for people interested in learning what she likes.