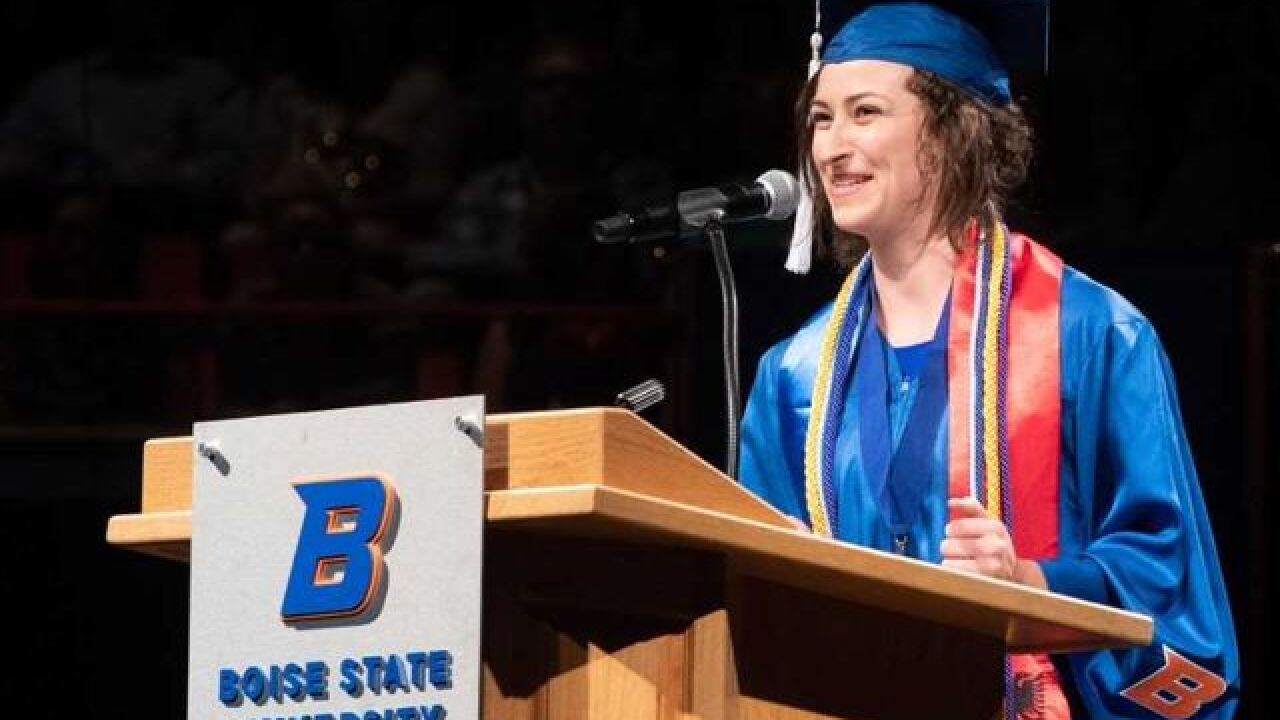 Copyright 2018 Scripps Media, Inc. All rights reserved. This material may not be published, broadcast, rewritten, or redistributed.
Boise State University

The Rhodes Scholarships are the oldest and most celebrated international fellowship awards in the world. Applicants come from more than 320 American colleges and universities. One of 32 people chosen for the award this year, Gallina joins students and recent graduates from universities including Harvard, Yale, Stanford, Princeton, MIT and Johns Hopkins.

Rhodes Scholarships provide all expenses for two or three years of study at the University of Oxford in England and may allow funding, in some instances, for four years.

“I am thoroughly overwhelmed; I’m still in shock!” Gallina said. “It’s an incredible honor to be named a Rhodes Scholar and something I did not accomplish on my own. Boise State faculty, staff and students, particularly members of the Honors College, have put in hundreds of hours in helping me get here. I am grateful to all those who invested, not only in my professional and academic development, but in my overall growth as a human being. A special shout out to my sisters and to Dr. Andrew Finstuen and Emily Jones of the Honors College -- without whom I wouldn’t have had the necessary courage and good humor to undertake the application process.”

Gallina, who graduated from Boise State in May 2018 with a bachelor’s degree in multidisciplinary studies and a minor in Arabic studies, is passionate about changing the way international governing bodies respond to disaster and the post-conflict reconstruction process.

“The Boise State family is so proud of Elena Gallina for her amazing achievement,” said Boise State Interim President Martin Schimpf. “We have worked to create an academic environment at Boise State University that encourages our students and graduates to pursue their passions and aim high. I can’t say enough about the quality of our Honors College and academic leaders across campus, and the high-caliber students they attract, support and challenge. Elena’s selection as a Rhodes Scholar is incredibly inspiring.”

Growing up the child of humanitarian aid workers in the aftermath of the Balkan wars, she witnessed first-hand the ill effects mishandled aid can have on society, and the ways in which communities struggle to recover from disaster.

She plans to pursue graduate degrees in refugee and forced migration studies, and business administration, eventually working to use social entrepreneurship to reduce violence against women caught in the midst of conflict.

Since graduating from Boise State, she spent the summer working for the State Department -- then moved to Albania where she has been working as a photographer for an economic development group and as a language tutor for members of the media.

Gallina was named a Rhodes Scholar finalist and received the Harry S. Truman Scholarship last year, becoming the university’s second Truman Scholar. That award, considered one of the most prestigious national scholarships in the United States, is based on leadership, a commitment to public service and academic excellence. Prior to that, she was Boise State’s first Boren Scholarship recipient. She was supported by eight additional private scholarships funded by donors to Boise State.

Gallina was a member of the Honors College at Boise State. Since graduating from high school, she has worked with Syrian refugees in Jordan, aided community development in Swaziland and served in a variety of social empowerment efforts in the Balkans, Israel, Palestine and Boise. Her most recent independent research deals with gender-based violence in refugee camps and the West Bank, and she spent the past academic year studying at the University of Haifa.

“We are thrilled that Elena has been selected as a Rhodes Scholar,” said Andrew Finstuen, dean of the Honors College. “She exemplifies what Rhodes calls ‘moral force of character.’ Across the globe — from the Balkans to Africa to the Middle East to Idaho — Elena has been advocating for the health and welfare of women and children. She is, quite simply, a humane force for change in the world.”

Gallina continues a legacy of success that other fellowship applicants from Boise State have achieved in recent years. In addition to Gallina’s accomplishments, since 2013 the Honors College fellowships advising team has helped 13 students research and teach abroad on Fulbright grants, two to study languages through Boren awards, two to continue research through a Goldwater Scholarship, and one to complete graduate study at Oxford University on a Marshall Scholarship, one of the most prestigious awards in the country.