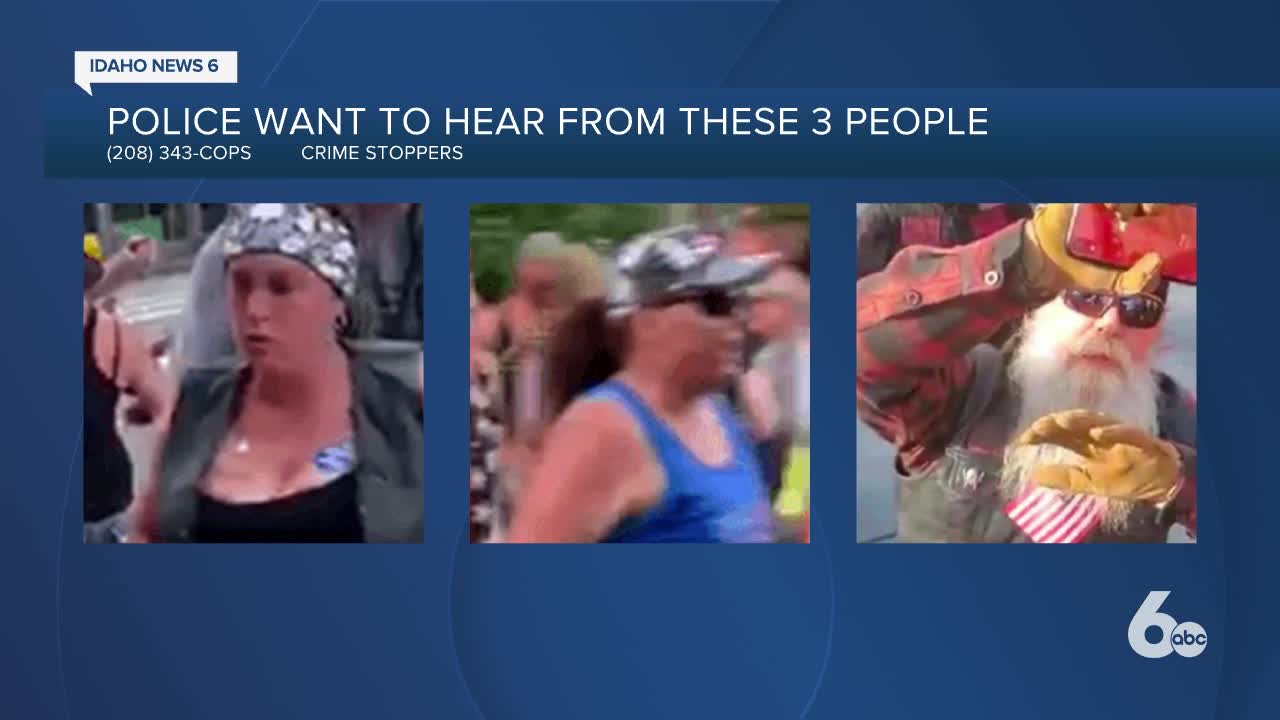 After clashes between protesters Tuesday night at city hall, Boise Police are looking for several suspects.

BOISE, Idaho — UPDATE: Boise Police have identified the people shown in pictures provided in a previous news release. The investigations have since concluded, and are being routed to the prosecutor's office for possible misdemeanor charges.

BPD says more reports came in earlier this week from possible victims and those reports are still under investigation.

Boise Police remind those going to future protests that officers will work to stop violence of any kind, as well as property damage. We will also work to hold those responsible for any violent act or vandalism accountable under the laws of the State of Idaho and City of Boise. We strive to protect everyone’s right to peacefully assemble and exercise their first amendment rights. This includes working with any and all protest organizers to facilitate these rights, while remaining neutral on the various political issues. Our biggest priority is to create a safe place for all who intend to peacefully exercise their rights and we do not condone violence by any party in these demonstrations.

ORIGINAL STORY: The Boise Police Department (BPD) announced Thursday that they are reviewing multiple sources of video footage from the protests Tuesday night at and near City Hall. The department is also reviewing videos posted on various social media platforms.

According to a press release from BPD, there are multiple investigations underway with several charges possible, most of which are misdemeanors. The department says they are aware of videos on social media where the people involved have not reported the incidents to police.

Boise Police encourages anyone who believes they were a victim of a crime during Tuesday night's protest to contact them and file a report. Detectives are looking into reports involving people on both sides of the protests and charges are possible for criminal acts done by individuals from all sides of the protest. BPD Investigators are working to identify several people who may have knowledge of specific incidents that happened during the event.

Possible charges are:
Idaho State Code 18-903. BATTERY DEFINED. A battery is any:

BPD note: this code is mostly used when the attack on the victim was not mutual in any way.

BPD note: the above City code and State Code are mostly used when there is some element of mutual physical fighting.

As part of the ongoing investigations, detectives are asking for help identifying subjects from two specific incidents at this time (pictured above). Officers on scene began investigations and interviews Tuesday and detectives held additional follow-ups on Wednesday.

If you have any information about the people pictured above, contact Boise Police by calling Crime Stoppers at 208-343-COPS, www.343COPS.com or the P3 TIPS app on your phone. You can also call Ada County Dispatch at 308-377-6790.