Boise Police are investigating acts of violence that broke out between protesting groups Tuesday night. 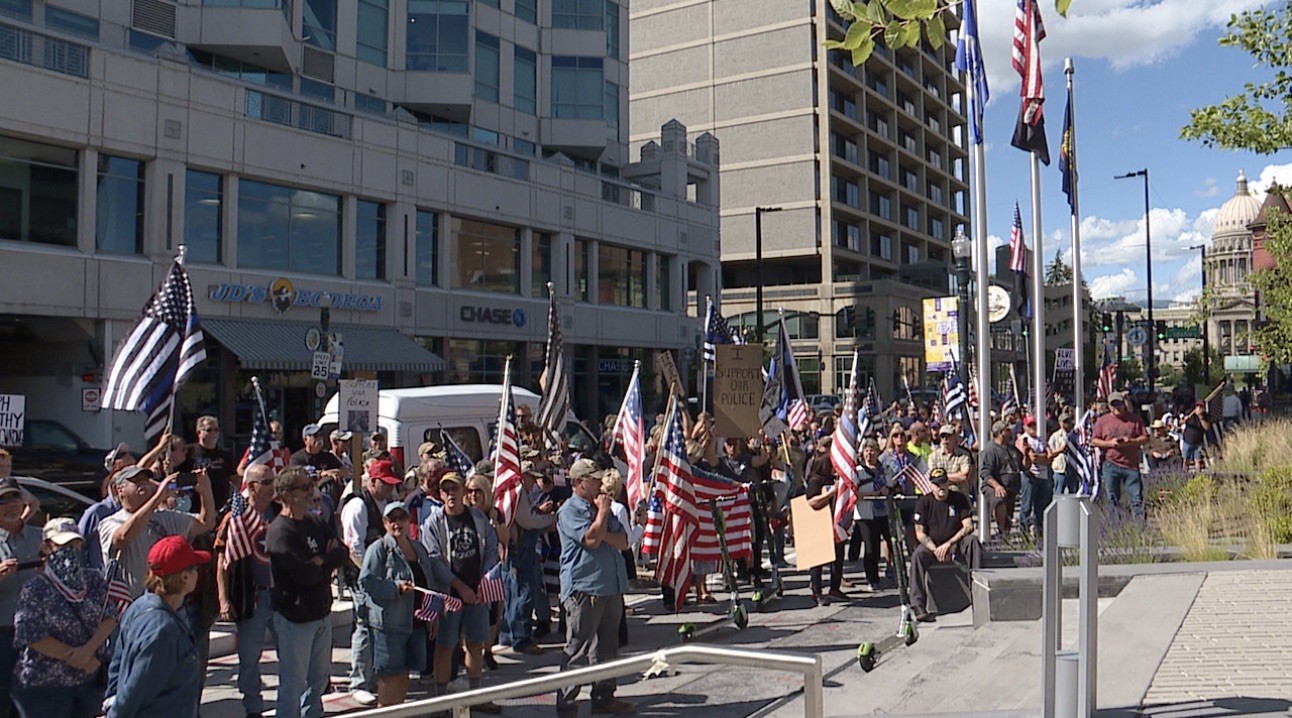 BOISE, Idaho — UPDATE: Boise Police has also put out a statement on Twitter about last night.

"Statement about last night's protests: BPD does not condone acts of violence. In anticipating a rally or protest similar to those experienced here recently, the amount of confrontation that we saw last night was unprecedented here in Boise.

Based on resources available at the scene, we did not make physical custody arrests last night. We are, however, following up on reported incidents and reviewing video to pursue charges and hold people accountable for any criminal actions conducted during the protests.

We hold dear people’s rights to peacefully assemble and exercise their first amendment rights. We regret if people did not feel safe protesting last night and know it’s our job to ensure a safe environment for everyone."

Statement about last night's protests: BPD does not condone acts of violence. In anticipating a rally or protest similar to those experienced here recently, the amount of confrontation that we saw last night was unprecedented here in Boise.

Last night our community witnessed – and many of our residents experienced – physical violence and intimidation by counter protesters during a Black Lives Matter protest at City Hall. Peaceful protest was the goal of the protesters who gathered – to speak their truths and call on us as leaders to take action. We have a right to do this, without intimidation and fear of violence, and it’s movements like we see right now that have spurred progress throughout our history.

In recent weeks on Tuesday evenings, protesters have assembled at City Hall and called for action. I’ve stepped into the crowd to listen when I can. Last night’s gathering would have been similar if not for the efforts to intimidate, and potentially incite additional violence, by counter protesters. I condemn those who showed up in our community under the guise of “protection” and instead intimidated, shouted epithets and white nationalist slogans, and in some case physically assaulted protesters. There is no room for this in our city. There is no room for this in our democratic society that enshrines the right to protest peacefully, dialogue constructively, and come together to build a stronger and more just community.

Counterprotestors demonstrated simultaneously. In their Facebook event, they asked users to bring American or blue line flags, inviting them to "come show [their] support for law enforcement," writing that "we will never be a country of lawlessness."

A spokesperson for the department said in the last 20 years, a lot of BPD's budget used to be in patrol, but since then, "a lot of it has shifted and been redirected to community outreach positions," such as School Resource Officers (SROs), bike officers, and more.

As we previously reported, under former Chief Bill Bones' direction, BPD introduced a mental health coordinator position. The department still has that position, according to a spokesperson, but she said it expanded last year to include two people: a coordinator, and another officer, who she said is well-versed to respond to those types of calls.

"BPD has been redirecting funds from the patrol budget to community outreach since 1996," said Haley Williams, a spokesperson with BPD. "The Community Outreach division has grown to nearly 25% of our annual budget. In comparison, the budget for Patrol Division has reduced from 56% in 1997 to 34% in FY20."

Boise City Council members expressed their desire Tuesday for the Boise Police Department to put more of an emphasis on social services and community policing.

According to the Statesman, Council President Elaine Clegg said systemic change happens over time. She said she wants to create room for the police department to find "creative solutions that promise a better outcome over time."

Council member Lisa Sánchez, the only person of color on the council, spoke to Idaho News 6 on Tuesday regarding her concerns and desires for Boise Police Department moving forward.

"I asked if the BPD had monies in the budget for addressing the needs of women who are particularly vulnerable during economic downturns," Sánchez said. "For example, I asked about the BPD capacity to treat with compassion folks who may engage in sex work or other criminal activity due to financial hardship. To serve them as victims of circumstances rather than offenders."

Winegar said Boise doesn't have a lot of prostitution, but that the special victims unit and internet crimes teams would be likely to work on such issues, according to the Idaho Statesman.

Sánchez said she had additional concerns about whether BPD would continue Diversity, Equity, and Inclusion (DEI) training for their staff, but added that Winegar addressed those concerns Tuesday, when he confirmed they will continue with that training.

The public has the chance to share their opinions on the 2021 Fiscal Year budget in a hearing slated for July 21.