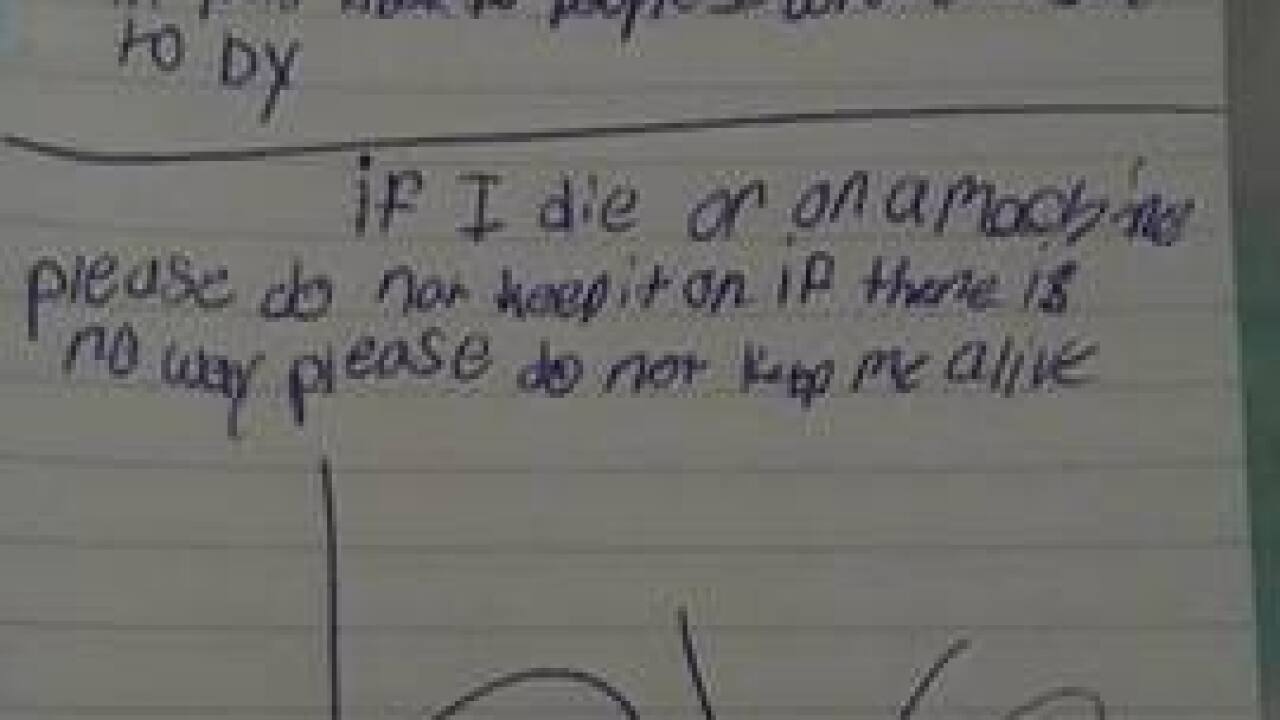 An 11-year-old Boise girl is recovering in the Pediatrics Unit at St. Luke's in Boise, after attempting to take her own life Saturday night. She says she consumed an entire bottle of pills as a result of bullying at school.

One day earlier, the young student at Grace Jordan Elementary School says she found notes in her school desk calling her a "fat cow" and telling her she should kill herself. On Saturday night, she said she couldn't shake those messages from her head.

"I was thinking about what they put in the notes, and was thinking maybe I would be better off," the 11-year-old girl said.

Her family says this isn't the first time they've had an issue with bullying at the school. Previous altercations have even turned physical, according to the student's parents.

"[She] was hiding in the school bathroom texting me that she was scared to come out and I had to call the school and tell them to go find [her] because she was scared," the child's mother, Amy Himmel, said.

Amy says she was informed Friday that school staff examined the notes and attempted to examine handwriting from student journals to find out who was responsible.

"They tried to blame me for writing the notes myself," the student said. "That made me mad because they weren't taking me seriously."

At 2:00 a.m. Sunday morning, Amy said she heard a loud thud from her daughter's room which she quickly discovered was the sound of her falling out of bed.

"We knew something was wrong, we couldn't even see the color of her eyes because her pupils were so dilated, she could not walk, she was covered in body fluids," Amy said.

It wasn't until they made it to the hospital that they realized what happened. Amy instructed a relative to search for clues in her daughter's bedroom and that's when they discovered an empty pill bottle and hand-written suicide notes to each member of the family.

In the first note, she wrote she swallowed a bunch of pills at 8:53 p.m. but "didn't know how many" and instructed her family members not to try to save her when she was found.

Now, she's hoping other victims of bullying will reach out and talk to someone before trying to take their own life.

"I just want to tell everyone, they're not alone," the 11-year-old said. "Talk to someone."

Despite dealing with ongoing bullying issues at school, Amy said she never in a million years would have expected this.

"Parents need to have conversations with their kids that bullying is not okay," Amy said. "I mean, I knew her feelings were hurt and nobody is going to be happy when they're dealing with bullying, but I had no idea we were even close to what ended up happening. None. I didn't have any idea."

With a long emotional and psychological recovery ahead, The child's parents hope their devastating weekend wake up call will spark conversations among other parents and their kids.

The Boise School District sent the following statement to Grace Jordan Elementary parents Monday in response to the issue:

Information, including misinformation, is presently being circulated through social media regarding recent student and staff actions at Grace Jordan Elementary School.

The Boise School District is barred by Federal law from providing any details regarding particular students. While the District cannot inform the public of actions taken to protect an individual student’s safety,  it does not equate to a lack of action on our part. Rather, District policy requires multi-level responses to safety concerns and the involvement of police and parents whenever potentially illegal behavior is discovered.

We aggressively and proactively confront bullying through our Bullying, Hazing and Harassment Policy [drive.google.com] procedures, which protect students, and prevention programs, which promote respectful school cultures.

This is a very difficult situation for the student and family, as well as for the students and staff of Grace Jordan. Our children are looking to the adults in their world to teach them how to interact with one another respectfully and to solve problems collaboratively.

The safety and security of each and every student and staff member is always our first priority. The Boise School District’s policies and procedures help us to accomplish this important priority.

Thank you for your attention to this matter.

If you or someone you know is struggling with suicidal thoughts, you can reach out to the Idaho Suicide Prevention Hotline 24 hours a day, 7 days a week at 1-800-273-8255.

You can also chat live with a representative by clicking here.